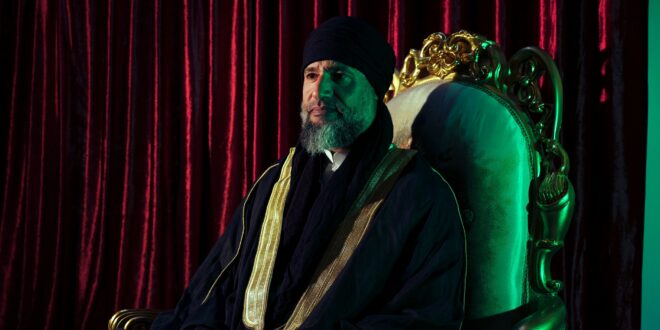 The Dis-United States, fractured and weakened domestically, is currently reducing its influence in the Middle East, both in Afghanistan and Iraq, concentrating its anti-terrorism effort on “enemies at home”.

The New York Times article – a newspaper well known for its CIA connections – would hardly have surfaced now was it not for the American effort to solve yet another self-made quagmire for which they are responsible: The Libyan tragedy.

The New York Times interview repeats numerous of the Western media lies that have been debunked long ago, such as “Gaddafi’s brutal crackdown” – which never happened, and the regular racist Western belittling of other nations, calling traditional Libyan dress “theatre” and so on.

The Saif al-Islam Team reports to The Herland Report that the striptease comment: “You need to come back slowly, slowly. Like a striptease. You need to play with their minds a little,” is far from anything Saif al-Islam would ever say.

But what can you expect, reading the New York Times, notorious for slandering public figures in other countries and working as a propaganda channel to push American interests even if it means the destruction of other people’s countries.

Arabic media discuss these topics, refuting the claim that al-Islam would speak in such a way, a man willing to give his life for his people, knowing very well their horrible suffering, hoping to mend the war torn nation. Al-Islam has repeatedly spoken about the need for reunification, forgiving enemies and rekindling the genuine spirit of a unified Libya.

At The Herland Report, we have written extensively over the years about Libya. Since 2011, the shock of watching how the richest state in Africa was effectively destroyed as the West openly collaborated with Al Qaida affiliated groups, was horrifyingly demoralizing news.

Most Westerners now know that Libya was Africa’s richest state with social welfare evenly distributed across the Libyan population. Gaddafi was a liberal supporter of women’s rights, and women participated in the military forces and were encouraged to pursue an education, among other things. Many Libyans now reminisce the free health services for everyone and free education for both men and women.

Before 2011, Libya was rated as a middle income nation by the UN, a socialist state, its oil revenues prompting Muammar Gaddafi to push for an African Gold Dinar.

The desire was to slip away from the economic Western dominion on Africa, scrapping the US dollar and strengthening a Pan-African approach, joining the African nations through the new monetary system of the Gold Dinar. But Gaddafi was killed and the country ruthlessly broken. Even the New York Times article now admits that “many Libyan warlords became immensely rich” from the ongoing looting of Libya, of course not mentioning the many Westerners participating in the looting of Libyan bank accounts and profiting from the Libyan tragedy.

Suspicions on whether the newly released photographs really are al-Islam is also discussed in Arabic media, as well as the authenticity of the New York Times interview.

Saif al-Islam Gaddafi in New York Times: Watch the Channel 4 reported interview with Saif al-Islam in which he predicts that destabilizing Libya would cause “rivers of blood” for its citizens and this tribal society, producing decades of civil war, in which foreign forces would take control over Libyan oil and exploit its resources. It was at this time that Muammar Gaddafi also warned that millions of Africans would flee from Libya and head for Europe if Libya was destabilized.

The immense Western media lies prompted by newspapers such as precisely The New York Times and friends, have later been massively debunked. The UK published its report in 2016, and its examination revealed extensive misinformation and fake news reported by leading media outlets.

The media presented a string of decisive lies about Gaddafi and the situation on those momentous days of February, 2011—lies that opened the floodgates for NATO’s waging of war. Read this article which uncovers some of the processes that were going on behind the façade of the mainstream media: Mustafa Abdul Jalil was among those who were very active at this stage, informing the rest of the world of the “Gaddafi attack”.

He spoke in a number of interviews that he gave for the Western media on this topic. Abdul Jalil later even admitted to Arab media openly—on tape—that the accusations against Gaddafi were lies.

The grim connection between Qatar’s al-Thani family and notorious Hillary Clinton’s The Clinton Foundation, which accepted millions during this period (ref. Judicial Watch, Wikileaks), as well as the exiled Libyans with connections to Sunni extremism acting as Western supporters.

Abdelhakim Belhadj, the leader of the Al Qaida affiliated Libyan Islamic Fighting Group, was instrumental to the Americans as ally when the NATO war broke out. He later became the military governor of Tripoli, photographed together with and honoured by Republican senator John McCain at a ceremony where he was referred to as Libya’s “heroic freedom fighter”. Belhadj has become one of Africa’s richest men, with a reportedly net worth of 19 billion USD, a notorious warlord and great friend of numerous Americans.

The very problem in Syria too was that the “moderate rebel groups” supported by the US  often affiliated with Al Qaida, ISIS and other rebel groups. Many have commented on the hypocrisy: Why pretend that these are not our allies?

The Judicial Watch retrieved DIA report from 2012 demonstrated who was allied with who. The Report came from the US Defense Intelligence.

In other words, no wonder the Americans wish to get out of the Libya mess, cover up the horrifying story of human tragedy and maybe join the Russians in hoping that Saif al-Islam can solve the current tribal mess.

There is no other way to explain the current New York Times sweet talk about al-Islam Gaddafi, the very man that the mainstream media has spent years demonizing and harassing.

When even The New York Times now admits that the responsibility for the Libyan tragedy lies with the Obama administration: “For Seif, the responsibility for Libya’s destruction ultimately lies with the administration of President Barack Obama, not with his father. He may be right,” it definitely signifies a change in the CIA narrative that has been pushed on Libya for so long.

Quoted from the article: “The rebels, Seif told me, were bent on destroying the state, and without a state, a tribal society like Libya is lost. “What happened in Libya was not a revolution,” he said. “You can call it a civil war, or days of evil. It’s not a revolution.”

The report emphasises that the premise for the intervention in Libya’s domestic affairs, which was based on the accusations of “Gaddafi murdering his own people” and “genocide in Libya”, was a lie that was propounded by Western and Gulf State media. It stated:

The Foreign Affairs Committee concludes that the British government “failed to identify that the threat to civilians was overstated and that the rebels included a significant Islamist element.”

The report also shows to what extent the Libyan War was propelled by exiled Libyans that had it out for Gaddafi. A number of extremist families with ties to al-Qaeda-affiliated groups, among others, were sent into exile by Gaddafi, as he would tolerate no such extremism in Libya.