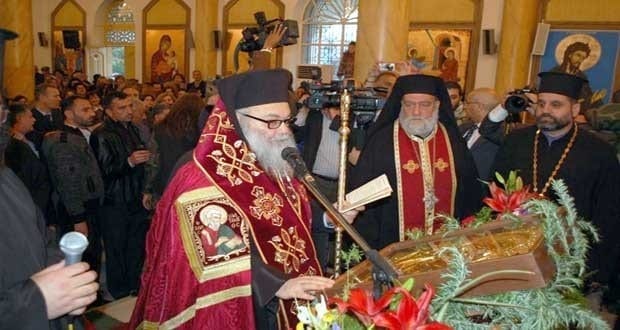 Herland Report: Prominent indicators confirm that the U.S. is the chief facilitator of the persecution of Christians around the world today, Raymond Ibrahim reports. (Photo: Syrian Greek Orthodox Church)

According to the recently released 2014 World Watch List, which ranks the 50 nations where Christians are most persecuted, Syria is the third worst nation in the world in which to be Christian, Iraq is fourth, Afghanistan fifth, and Libya 13th. All four countries receive the strongest designation, “extreme persecution” (other designations are “severe,” “moderate,” and “sparse” persecution).

Aside from being so closely and harshly ranked, these four nations have something else in common: heavy U.S. involvement. Three—Iraq, Afghanistan, and Libya—were “liberated” thanks to U.S. forces, while in the fourth, Syria, the U.S. is actively sponsoring “freedom fighters” against the regime, many of whom would be better labeled “terrorists.”

Open Doors, a non-denominational group supporting persecuted Christians worldwide, said on Wednesday it had documented 2,123 “martyr” killings, compared with 1,201 in 2012. There were 1,213 such deaths in Syria alone last year, it said. “This is a very minimal count based on what has been reported in the media and we can confirm,” said Frans Veerman, head of research for Open Doors. Estimates by other Christian groups put the annual figure as high as 8,000.

While most Americans are shielded from the true nature of the war by the U.S. media’s reluctance to report on it, Arabic media, websites, and activists daily report and document atrocity after atrocity—beheadings and bombed churches, Christians slaughtered for refusing to convert to Islam, and countless abducted for ransom or rape—at the hands of those whom the U.S. supports.

It’s enough to point out that “the largest massacre of Christians in Syria,” to quote a top religious leader, was left wholly unreported by any major U.S. news network.

At any rate, the statistics speak for themselves: Syria, which used to be religiously tolerant, is now, in the context of the United States’ trying to bring “democracy” to it, the third worst country in the world in terms of “extreme persecution” of Christians.

charged that the Obama administration has essentially declined to make the protection of religious minorities a priority . . . “There are many instances where the vacuum of leadership and spokesmanship has created a real problem,” said the human rights leader. “I would say that every significant data point on this year’s ‘2014 Watch List’ is worse—and I think a factor in it is a lack of leadership from Western governments including . . . the U.S. in terms of religious freedom.”

But it’s worse than that. Far from taking any action or providing leadership—or simply ceasing to support the terrorists responsible—the Obama administration recently tried to go to war with Syria on behalf of the “freedom fighters,” amazingly, in the name of “human rights” (Apparently the unsubstantiated rumor that Assad massacred people is enough for the U.S. to go to war, but the ongoing and well-documented massacres of Christians and other civilians at the hands of the opposition is not enough for the U.S. to stop supporting them.)

What’s worse, even the most misinformed mainstream-media-watching American today knows that the so-called “Arab Spring,” which was hailed to justify U.S. support for “rebels” of all stripes—in Egypt, the Muslim Brotherhood (which months ago destroyed some 80 churches); in Libya, al-Qaeda, which has turned Benghazi into a terror zone; and now the “freedom fighters” in Syria—is not what it was touted to be.

In other words, at this point, whenever the U.S. intervenes in an Islamic nation, Islamists come to power. This is well demonstrated by the other three nations to which the U.S. brought “democracy” and where Christian minorities suffer “extreme persecution”:

Surely a common theme emerges here: Where the U.S. works to oust secular autocrats, the quality of life for Christians and other minorities takes a major nosedive. Under Saddam, Qaddafi, and Assad, Christians and their churches were largely protected.

Moreover, while George W. Bush was responsible for Afghanistan and Iraq, the argument can be made that, back then (2001 and 2003), this pattern of Islamic radicalization that erupts once autocrats are gone was less well known than it is today. There weren’t many precedents.

Conversely, the Obama administration has had both Afghanistan and Iraq to learn from—and yet still it supports Islamists and jihadis. But by now, what happens once they assume power—religious persecution, terror, oppression—is no longer a secret.

Incidentally, those who care little for the fate of Christians or other minorities in the Islamic world would do well to remember a simple truism: Wherever anti-Christian elements come to power, anti-American forces come to power. The two are synonymous.

Put differently, Muslim persecution of Christians is the litmus test of how radical an Islamic society has become. In all those Muslim nations that the U.S. has interfered in—Afghanistan, Iraq, Libya, Egypt (till the Egyptians revolted, to the chastisement of the U.S.), and now Syria—the increase of religious intolerance is a reflection of the empowerment of forces hostile to Western civilization.

I am often asked, “How can we help persecuted Christians?” At this point, one must respond: “How about starting with getting the U.S. government to stop being the chief facilitator of Christian persecution?” Altruism aside, it would be in the interests of all who value freedom, religious or otherwise—and especially their descendants.

Raymond Ibrahim, author of Crucified Again: Exposing Islam’s New War on Christians (Regnery, April, 2013) is a Middle East and Islam specialist, and a Shillman Fellow at the David Horowitz Freedom Center and an Associate Fellow at the Middle East Forum.