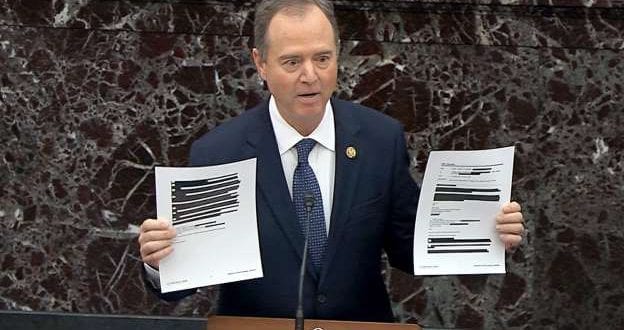 Herland Report: Adam Schiff history of inaccuracies: Liberal media have bathed the California Democrat in praise. A CNN analyst called him “dazzling.” A Washington Post reporter tweeted that his trial argument to convict President Trump was one for the ages.

Conservatives take a decidedly different view. They wonder on social media why a congressman who floated unproven conspiracies and a false dossier is leading the case against Mr. Trump, and they ask why the liberal media are so uncritical, writes Rowan Scarborough at The Washington Times.

As a backdrop: On Jan. 10, 2017, BuzzFeed posted the Christopher Steele dossier, which made a dozen felony charges against Mr. Trump and his allies. A month later, The New York Times reported that the intelligence community owned a year’s worth of phone records and intercepts between the Trump campaign and Kremlin intelligence. The dossier allegations and Times story were both false.

The next month, the House Permanent Select Committee on Intelligence convened the first major hearing into Russia’s interference in the 2016 election by computer hacking and social media warfare. A key question was whether the Trump campaign was a witting ally.

It was in that media glare that Mr. Schiff began making a series of conspiracy claims as he sat on a committee that is supposed to deal in facts. At the witness table were FBI Director James B. Comey and Navy Adm. Michael S. Rogers, head of the electronic-listening National Security Agency.

Mr. Schiff immediately endorsed the 35-page dossier and praised its author, former British intelligence officer Mr. Steele. At the hearing, the congressman read from Mr. Steele’s reporting, which stated that his allegations wholly came from Kremlin intelligence figures. This meant Mr. Schiff was injecting a list of Moscow assertions into the American political system as he was investigating Russia’s interference in the election.

To bolster Mr. Steele’s credibility, Mr. Schiff said this about Trump campaign adviser Carter Page and Russian oil giant Rosneft: “Is it a coincidence that the Russian gas company Rosneft sold a 19% share after former British intelligence officer Steele was told by Russian sources that Carter Page was offered fees on a deal of just that size?” The only coincidence was that the 19% figure was in the press weeks before Mr. Steele wrote his memo.

Mr. Schiff also quoted Mr. Steele on a purported conspiracy between campaign chairman Paul Manafort and Mr. Page: “According to Steele, it was Manafort who chose Page to serve as a go-between for the Trump campaign and Russian interests.”

Independent evidence shows the two never knew or spoke with each other. Mr. Schiff also said Mr. Steele was “highly regarded” by U.S. intelligence. When Mr. Page later appeared before the committee, Mr. Schiff repeatedly quoted the dossier in questioning the former aide, forcing him to disprove what Mr. Steele had written.

Mr. Schiff also tried to use Mr. Page to prove another dossier allegation: that Trump attorney Michael Cohen secretly traveled to Prague to visit operatives of Russian President Vladimir Putin. He asked Mr. Page whether his 2016 trip to Hungary was linked to Cohen. By November 2017, Mr. Schiff was dismissing critics and sticking by Mr. Steele and his dossier.

“So I think this is a bit of an effort to discredit Christopher Steele, discredit the dossier, ignore how much of it has been corroborated already and ignore the fact that the intelligence community is operating from a broad array of sources as a way of basically calling this all a hoax. And it just doesn’t add up to me,” he said on CNN.

The dossier disclosure was not the only time Mr. Schiff welcomed Kremlin claims into the political process. He also sought naked photos of Mr. Trump from Moscow via a politician in Ukraine.

He was pranked by two Russian comedians, one of whom posed as a Ukrainian official. During a lengthy phone call, Mr. Schiff eagerly questioned the impostors on the types of compromising photos he could obtain, according to a recording posted online. Later, a top Schiff aide reached out to the Russian and asked whether the material was being delivered to the Ukrainian Embassy in Washington.

Mr. Schiff said several times that he had seen evidence of Trump-Russia collusion to interfere in the election and it was beyond circumstantial.He began this talking point in March 2017.

“I can tell you that the case is more than that,” he said on MSNBC. “And I can’t go into the particulars, but there is more than circumstantial evidence now.”

Special counsel Robert Mueller said in his March 2019 report that he did not find a Trump election conspiracy. No Trump associate was charged in such a conspiracy.

As the dossier’s credibility began to fall apart in 2017, Rep. Devin Nunes, California Republican and then-chairman of the House intelligence committee, began an attempt to find out who financed Mr. Steele’s work and to answer this question: Did the FBI use the dossier to obtain a judge’s permission to place a Foreign Intelligence Surveillance Act wiretap on Mr. Page?

Mr. Schiff, who voted to impeach Mr. Trump for not turning over documents, opposed Mr. Nunes on both fronts.

“What I do not know is: Did the FBI or DOJ use this dossier that was funded by the Democratic Party and the Hillary campaign to open up investigations into political campaigns or American citizens,” Mr. Nunes told Fox News in November 2017. Mr. Schiff opposed that effort, too. He implied that forcing the FBI to disclose how it used the dossier could lead to terrorist attacks.

“The real damage they have done is they have damaged the relationship between our committee and the intelligence community in the future,” he told MSNBC’s Rachel Maddow. “They are going to be wary about sharing information [because] they won’t trust us to be responsible stewards of it.”

“FBI and DOJ officials did not ‘abuse’ the Foreign Intelligence Surveillance Act (FISA) process, omit material information, or subvert this vital tool to spy on the Trump campaign,” he said.

Mr. Horowitz said the warrant could not have been submitted without the Democratic Party-financed dossier. There was no other evidence of a conspiracy. Mr. Schiff said in his countermemo: “In subsequent FISA renewals, DOJ provided additional information obtained through multiple independent sources that corroborated Steele’s reporting.”

Not true, said Mr. Horowitz. None of Mr. Steele’s reporting in the warrant was ever corroborated. In fact, FBI agents acquired evidence from Mr. Steele’s main source, who placed great doubt in Mr. Steele’s allegations. But the FBI left this evidence out of subsequent warrant renewals.

Mr. Schiff said in his countermemo: “The FBI and, subsequently, the Special Counsel’s investigation into links between the Russian government and Trump campaign associates has been based on troubling law enforcement and intelligence information unrelated to the ‘dossier.’”

In fact, there is no indication in the Mueller or Horowitz reports that agents found evidence — texts, emails, communication intercepts, informants or whistleblowers — that provided evidence of a conspiracy outside of the dossier.

Jack Langer, Mr. Nunes’ spokesman, looked back on the Schiff battles and told The Washington Times: “Schiff was not only spectacularly wrong about FISA abuse and about Trump-Russian collusion, he tried to obstruct our investigation of these issues. He encouraged the agencies we oversee not to comply with our document requests, and he denounced our subpoena for Fusion GPS’s bank records that outed the Hillary Clinton campaign and the DNC as funders of the Steele dossier, which Schiff was touting. The media is already trying to memory hole all of that.”

Upon taking control of the intelligence committee, Mr. Schiff announced in February 2019 a broad investigation into Mr. Trump and his family business. Among new allegations, he said Mr. Trump was involved in money laundering with Russians.

“During the prior Congress, the Committee began to pursue credible reports of money laundering and financial compromise related to the business interests of President Trump, his family, and his associates,” Mr. Schiff said.

By the time Mr. Schiff wrote this anti-Trump agenda, Mr. Mueller had completed his investigation and found no election conspiracy. There is no hint in his report of money laundering. Republicans say Mr. Schiff’s allegations closely follow those made by Fusion GPS’s Mr. Simpson, who handled Mr. Steele and promoted his claims in Washington.

Cohen, who turned Trump accuser, later told House committees he knew of no Russian money coming into the Trump Organization.

Republicans say Mr. Schiff’s most egregious falsehood was at a Sept. 26 House hearing on the release of the Ukraine whistleblower report and a White House transcript of Mr. Trump’s July 25 phone call with Ukrainian President Volodymyr Zelensky.

Mr. Schiff told the public that Mr. Trump asked Mr. Zelensky to “make up dirt” on former Vice President Joseph R. Biden. When Republicans reread the transcript and challenged Mr. Schiff, he admitted he had made up the quotes as “parody.” But later on Twitter, Mr. Schiff claimed his allegation had been confirmed.

Mr. Schiff’s words were not in the call transcript or whistleblower complaint against Mr. Trump, and they have not materialized since. Read the full article here.