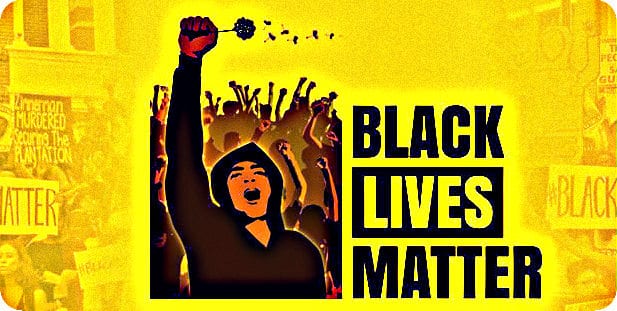 Herland Report: Black Lives Matter states that they are trained Marxists whose goal is to remove the democratically elected president Trump. The Marxist revolution that they fight is anti-democratic in essence.

Black Lives Matter thereby states that the organization is against democracy, the rule of the people and completely lose our support.

“Trump not only needs to not be in office in November but he should resign now,” says co-founder of the Black Lives Matter Global Network Patrisse Cullors. “Trump needs to be out of office. He is not fit for office,” tweets CNN.

How is the implementation of authoritarian dictatorship going to help the black communities in the United States? Does no one have knowledge about what happened in the Soviet Union, the Gulag? Is the aim to kill all the whites?

Yet, the also Communist Antifa mainly Millennial black clad white youth are educated at American Universities that have preached neo-Marxism 1960s hatred of traditional, historical Western values for decades now. No wonder they all vote for Karl Marx’ bloody revolution.

The BLM path seems to resemble the Islamist terror group ISIS more and more. While tearing down statues of, for example, Hans Christian Heg who fought to end slavery and gave his life in the fight to help black Americans, Black Lives Matter seem less and less about helping black lives.

Black Lives Matter rioters in Wisconsin decapitated and destroyed a statue of Colonel Hans Christian Heg, a Norwegian immigrant who spent his life fighting slavery before dying in battle while leading Union soldiers in the American Civil War.

Many other blacks are protesting against the anti-democratic trend, in Africa and everywhere, but they are hardly heard in the mainstream media.

What about Egypt? Is Anti-democracy Black Lives Matter heading to Africa to tear down statues there too? The pyramids were built by slaves, the mummies of ancient pharaos who owned slaves. What about the African tribesmen who sold slaves to Arabs that they had taken from other black tribes when at war? Is the BLM going to demand that African tribes who owned slaves change their names?

After all, the white slave traders only waited at the coast, as they were unable to enter into the interior of Africa at that time (they fell ill and could not handle the humid climate). Why no attacks on Arab nations, only the United States?

Why no attack on Arab nations who had white slaves? Is it only black slaves that matter?

After all, it was British Christian preachers and activists who in the British Empire ended black slavery. Is no one happy about that? The British Empire should be hailed for its work to end slavery.

The politicized agenda of the Black Lives Matter seem more and more to only be the Democrat goal of removing the democratically elected president and participating in a coup d’etat.

This will likely be the very element that ends up reelecting Trump in November, if nothing unforeseen happens, as no sane American will want a lawless anarchist society, and are likely to vote for law and order Trump more than ever.

Washington Examiner: One of the leaders of the Black Lives Matter movement said one of its goals is the removal of President Trump from office.

“Trump not only needs to not be in office in November, but he should resign now,” Black Lives Matter Global Network co-founder Patrisse Cullors told CNN’s Jake Tapper on Friday. “Trump needs to be out of office. He is not fit for office. And so, what we are going to push for is a move to get Trump out.”

She continued, “While we’re also going to continue to push and pressure Vice President Joe Biden around his policies and relationship to policing and criminalization. That’s going to be important. But our goal is to get Trump out now.”

Cullors has been a vocal face of the Black Lives Matter movement following the death of George Floyd in police custody on May 25, and she has expressed support for the push to defund police departments across the country.

“The demand of defunding law enforcement becomes a central demand in how we actually get real accountability and justice,” she said earlier this month. “Because it means we are reducing the ability of law enforcement to have resources that harm our communities.”

Cullors also criticized police officers who have knelt in solidarity with protesters, calling it “disingenuous.”

“[Police officers] taking a knee is not stopping the deaths of our community members,” she argued. “We need transformation. These things don’t happen through police taking a knee at protests and then, right after they take a knee, getting up and tear-gassing us and rubber-bulleting us and beating us with batons.”

Support for the Black Lives Matter movement has been surging as of late, as donations have poured in from high-profile donors and polling shows support for the message has doubled since 2016.