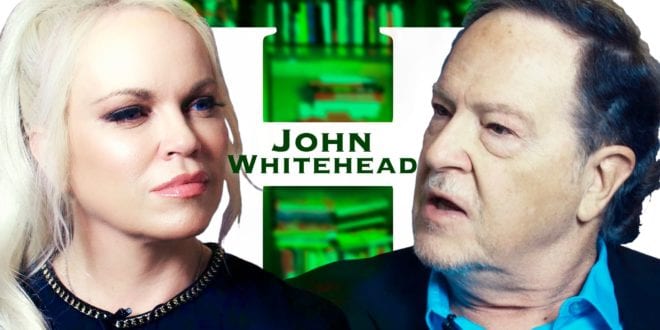 John Whitehead is the president of The Rutherford Institute, a constitutional attorney who has defended many against police brutality, one of the US’ leading voices for the American Constitution and the Bill of Rights.

He is also an acclaimed author with titles such as Battlefield America. The war on the American people, a brutal critique of how the American society has developed further and further away from Constitutional freedoms. Also read A government of Wolves. The Emerging American Police State.

Hanne Herland, historian, bestselling author and founder of The Herland Report: – A very welcome to the Herland Report, John Whitehead. You are a constitutional attorney, the president and founder of the Rutherford Institute, and examine the issues that are dire to the American society today as we see a remarkable divisiveness.

John Whitehead: – There was a detailed study done by Princeton University in conjunction with Northwestern University.

They studied twenty years of laws and regulations passed in Washington, D.C.

The conclusion of a study was that we live in an oligarchy administered by, and run by, a money elite.

Indeed, several years later after that, there was an FBI memo that mentioned this, that some group basically runs the country.

It was leaked and subsequently called the deep state. So, the question is always, in any system, who is running it, really?

Hanne Herland: – You have an award winning book, Battlefield America, which is a brutal critique of how the American system has developed further and further away from the constitutional freedoms, the constitution as originally written.

John Whitehead: – In the beginning, we did not have a Bill of Rights. The nation was mainly a structure of government. Some were afraid that the way the government was established would mean that the president would have too much power. The central government and the states were worried about that.

So, there were a number of people in the country that said “we have to have a Bill of Rights or we will not ratify a real Constitution”. Thomas Jefferson was one of them. He wrote the Declaration of Independence, in which he said that our rights are there when we are born.

They are automatically there. We inherit those rights. They are God given. We were created with certain absolute basic rights that the government cannot take away, and the purpose of government is to protect those rights.

We needed a Bill of Rights. They were the first 10 amendments to the constitution. They were added and those basically form the rights that we have as citizens of the country.

Exclusive interview John Whitehead: Unfortunately, I see today how children coming out of our state run public schools, financed public schools, colleges and law schools, they cannot tell me what the five freedoms in our First Amendment are.

When I would talk to people about thirty years ago, they had a good idea what the Bill of Rights was. The five freedoms in our First Amendment are: the right to free speech, the right to assemble and protest against the government, the right to religion, and a government that is free of establishing a religion.

You can talk to people who are going to law school at Harvard and the big schools today that have trouble telling us what these freedoms are. They do not teach them anymore.

I was born and raised in Africa and have lived in the Middle East for many years and in South America. You do not see those kind of rights in many other countries.

John Whitehead: – Yes, as long as the demonstrations are peaceful, those rights are there. Thomas Jefferson, who wrote the Declaration of Independence, said that we inherit those from the beginning. It is created right there in nature. rights, but they need to be spelled out because, unfortunately, government will over stuff those rights. They do it continually.

This is why we have a Bill of Rights. There is a right to the Second Amendment, the right to own a firearm.

The reason that this is in the Bill of Rights is that, as George Washington said, we do not have a standing army on American soil.

Today we face that. The only way to protect yourself against an enemy is a weapon.

George Orwell, the great writer, said that the rifle over the working man’s cottage is a symbol of freedom. That is an actual quote from George Orwell.

Exclusive interview John Whitehead: All these Rights are being broken today with the SWAT team raids we are seeing happening.

I would say the most important amendment we have is our so-called Fourth Amendment, which is the right against unreasonable search and seizure by the government. They cannot just grab you. They cannot search you on the streets and those kind of actions. But routinely police are doing this today.

John Whitehead: –  We have a big lawsuit that I filed just recently where last August they put 700 policemen surrounding the city. There had been riots the year before, and people entering the downtown complex, they were searched and all this.

Well, we had a disabled veteran in his late 60s who went into a store.

He brought two pistols that it was OK to carry guns on the mall, but you could not buy air spray or anything like that that some people could use in a riot.

He bought Arizona tea, which is in the can. He was searched and arrested and thrown in a police car and cut up.

This is a sixty four year old war veteran on a walker.

But again, we are arguing that that was an unreasonable search and seizure. You do not grab somebody in America, search their bags and throw them in a police car like that. There are key freedoms in our amendment.

Exclusive interview John Whitehead: But what I am afraid of saying today, and I will say it with Americans is, I talk to policemen that have trouble in our government because officials cannot articulate what is in the Constitution.

Politicians running for office there, they have all the worst scores when they are tested on what is in the Constitution. So, you have a people in America that has grown ignorant of the Constitution and ignorance is sliding down a very dangerous hill.

In other words, the nation sleeps. The people fell asleep watching the TV set, which he was worried about at the time – their screen devices, and they are not paying attention to what is happening in the country.

Jefferson said it best. He said, eternal vigilance by the citizens is how we keep freedom. You have to stay awake. As I often say, your eyes are useless. If your mind is asleep, your eyes do not work anymore. We need to keep our minds vibrant.

I thought that is what our educational system was designed to do in this country. Unfortunately, the educational systems is not doing that, and so you are finding more and more people who have no clue about their basic rights, that which used to be taught very firmly in our schools.

Thomas Jefferson wrote the Declaration of Independence. Eternal vigilance. Stay awake, people. This is a lesson for people in Europe. Know what your governments are doing always. In this country, the Constitution’s first words says “we the people do establish this country”. What I keep emphasizing to people is that we are the government.

Hanne Herland: – So, are we watching a shutdown of democracy?

John Whitehead: – Yes, we are.