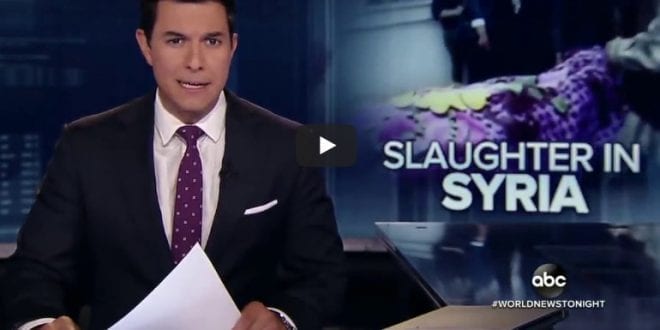 Herland Report: Honesty in journalism is hard to find sometimes. The stories of fraud, lies, fake news and manipulated stories in order to fit political agendas has become mainstream.

[pullquote]Fakes such as these boost the sentiment of massive bias against Trump in the mainstream media. [/pullquote]

The clips where CNN editors openly stated that everyone knows that “RussiaGate is bu¤¤sh¤¤”, are notorious, stating CNN only used the story to boost ratings.

The story of how World Trade Center Building 7 collapsed 9/11 yet no plane had flown into it. The Kuwaiti incubator story, Iraq and weapons of mass destruction, Muammar Gaddafi who was not killing his own people after all.

The Kennedy mystery. George Soros’ manipulations. And many more.

Her is another example, among the latest and – Syria again. ABC used an old 2017 clip from a Kentucky machine gun Show, stating it was Turkish forces killing off Kurdish towns and civilians. “The Kurds, who fought alongside the US against ISIS, now horrific reports of atrocities committed by the Turkish,” the ABC reporter says.

As “Trump orders American troops to withdraw”, the clip and chosen heading seemed to demonstrate how wrong it is for Trump to withdraw US forces as “Slaughter in Syria” was the consequence. Again, manipulation of the kind we are all too used to.

When caught in the act of cheating, Gizmodo reports that ABC apologized. Sic.

Gizmodo reports: ABC News aired a video on Sunday that host Tom Llamas said depicted a Turkish attack in northern Syria against Kurdish civilians. Turkey is indeed pushing into Syria and slaughtering Kurds along the way, but the video ABC News played last night is from a military gun demonstration in Kentucky that was published to YouTube in 2017.

But the explosions in the video are identical to explosions seen in a video titled, “Knob Creek night shoot 2017.” Knob Creek Gun Range, in the town of West Point, Kentucky, hosts a biannual event called the “Military Gun Shoot & Military Gun Show” where weapons are fired at night. Members of the public can come and see the show for a fee in April and October.

Up close, it is clear that the shots are identical: