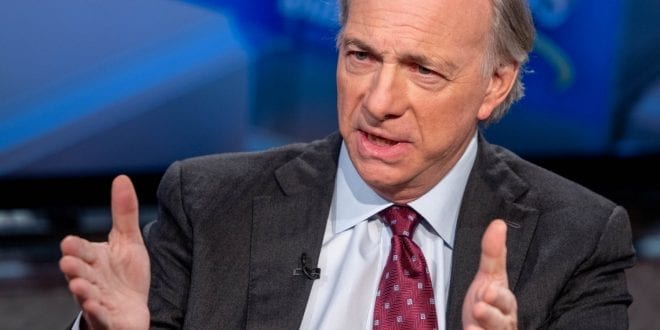 Herland Report: The founder of Bridgewater Associates, the largest hedge fund, Ray Dalio calls for reforming capitalism, arguing that if the US does not redistribute wealth and opportunity, the country’s existence as a stable global power is threatened, writes Business Insider.

He said the US needs leadership that will declare inequality a national emergency.

Dalio is the founder and co-CIO of Bridgewater Associates, the Connecticut firm with $160 billion in assets under management. On “60 Minutes” Sunday night and in a LinkedIn post published Thursday, he deemed current levels of inequality a “national emergency” and called for a reformation of capitalism.

“I think the American dream is lost,” he said on the CBS broadcast.

In his LinkedIn essay, he wrote that the “income/wealth/opportunity gap and its manifestations pose existential threats to the US because these conditions weaken the US economically, threaten to bring about painful and counterproductive domestic conflict, and undermine the United States’ strength relative to that of its global competitors.”

Dalio used data to show there are essentially two Americas, where the top 40% is doing significantly better than the lower 60% and the nature of accrued wealth and educational opportunities for the majority of Americans is keeping them trapped in poverty.

Dalio said that while the inequality in the country is benefiting the wealthiest Americans as much as it ever has, the economy as a whole is losing in the long run. He explained it’s resulted in fewer people being able to participate in the economy as both consumers and workers, as well as political tensions he’s afraid will tear the country apart.

Excerpts: There has been little or no real income growth for most people for decades. As shown in the chart below on the left, prime-age workers in the bottom 60% have had no real (i.e., inflation-adjusted) income growth since 1980.

That was at a time when incomes for the top 10% have doubled and those of the top 1% have tripled.[i] As shown in the chart to the right, the percentage of children who grow up to earn more than their parents has fallen from 90% in 1970 to 50% today. That’s for the population as a whole. For most of those in the lower 60%, the prospects are worse.

The income gap is about as high as ever and the wealth gap is the highest since the late 1930s. Today, the wealth of the top 1% of the population is more than that of the bottom 90% of the population combined, which is the same sort of wealth gap that existed during the 1935-40 period (a period that brought in an era of great internal and external conflicts for most countries).

The charts show real income growth by quintiles for the overall population since 1970. Ask yourself which one you’re in. That probably has given you your perspective. My objective is to show you the broader perspective.

Most people in the bottom 60% are poor. For example, only about a third of the bottom 60% save any of their income in cash or financial assets.[vii] According to a recent Federal Reserve study, 40% of all Americans would struggle to raise $400 in the event of an emergency.[viii]

And they are increasingly getting stuck being poor. The following chart shows the odds of someone in the bottom quintile moving up to the middle quintile or higher in a 10-year period. Those odds declined from about 23% in 1990 to only 14% as of 2011.