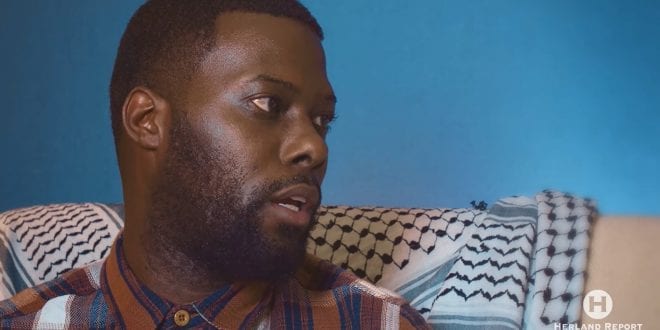 We spoke about the Black Lives Matter fight against injustice, poverty and his view on rogue capitalism. Watch it here.

[pullquote]Keedran Franklin: We want to create a better system for all, class has no race, color or boundaries.[/pullquote]

In an exclusive interview, he explains the reasons for his engagement in trying to bring justice to the Black communities in Tennessee.

“I started with community organizing once I realized that it takes the people who are struggling to educate and mobilize among ourselves, because the “Powers that Be” had a system and their system is to get richer off of the backs of our struggles and disdain.”

“Police brutality is becoming the norm in America, it is militarized now,” says  Keedran Franklin, a community organizer, Black Lives Matter leader, co-founder of the Memphis Coalition of Concerned Citizens, motivational speaker and a strong advocate against police brutality.

Fronts are hard, pro- or con organizations such as the Black Lives Matter, especially in the hard-line racial divisiveness that now characterize the United States.

But what is the root cause of communities organizing demonstrations and attempting to address issues that are important to them?

Black Lives Matter address a variety of issues, from police brutality to the prison industry and racism against blacks in America. Racism against whites is another matter, white slavery and so on, which we also address at The Herland Report.

In conversation with Keedran Franklin, many who are outside of the day to day work of the Black Lives Matter, may get some insight into how it is to live in a society where racism and classism is a reckoned with force on a level that Europeans often do not comprehend.

Hanne Nabintu Herland:  – Keedran Franklin, it was such a pleasure to have you at The Herland Report TV show, speaking about the Black Lives Matter, the Coalition for Concerned Citizens and in general, the background for why these organisations matter. Please tell us your story and why you started with community organizing.

Keedran Franklin: “In America, so-called black people are being shot down and beaten like dogs in the streets and that needed to be addressed with tangible recourse. For example, Mike Brown Jr., who was shot and left in the hot sun on the ground for over 4 hours.”

Hanne Nabintu Herland: – Poverty in America. What are the driving forces in your view?

Keedran Franklin: Poverty in America is being driven by capitalism and this idea that free labor is right and one of the systems that helps lower overhead and cost to do business very low, therefore netting a large profit margin for the ones at the top.

So, in my view imperialism, capitalism, and elitism has brought us to a place that has created a market for rich people to have a pool of poor people to work their jobs.

They intentionally placed poverty as a method, through strategic systems that were designed to exactly that what it is doing. Perpetuating poverty and the poor class.

Hanne Nabintu Herland: – Coalition for Concerned Citizens. How do you work specifically to better local communities?

Keedran Franklin:  – The Coalition of Concerned Citizens is an Organization of Organizations that has helped across the spectrum of poor class people.

It is helping to create sustaining jobs for poor people to organize themselves out of poverty and having the information and strength to challenge the ones that has accosted us some basic needs of our lives.

We have helped to bring an end to idea of low paying temp-agency jobs, by pressing for the national call of $15 an hour and Union Rights in this company that can afford to pay, since most receives PILOT (Pay In Lieu of Taxes) where millions are saved for the company and nothing for the workers who break their backs making the company rich.

Interview with Keedran Franklin: Herland Report. Franklin: – Police brutality is a disease of America that we can’t quite rid our system of.

One of the reasons we can’t purge our law enforcement agencies of the egregious acts is because it is apart ofthe police culture and a norm for their union to protect.

Cases of brutality are investigated by their own and often times overlooked unless there is a large fuss about it via social media. And even with video, certain cases still receive no measurable actions taken against the law enforcement agents or agency.

Hanne Nabintu Herland: – Militarization of Police in the US. What do you see as the big dangers?

Keedran Franklin: Police has been militarized is the big danger, such as a president with this sovereign/ yyrant archetype that drives him to act irrational, simply because there i a bully mentality that comes with having certain powers and entities backing the militarization and the damage that comes with it.

Police being trained by Israeli military and the Pentegon passing down surplus war equipment that is being turn inward toward citizens and residence of this country is a huge problem and we must divest from traditional police services, because the negative impact is mainly against black and brown folks of this corporation of America.

Hanne Nabintu Herland: – How do you see the future? Further escalation or will we see some betterment of the situation? You are so close to this, your assessment on this topic is important to get into the interview.

Keedran Franklin: – Unless we educate, agitate,  organize, the situation will worsen.

The system of America was created to do exactly what it is doing now, and morally it is not sound or wholesome for the majority of its inhabitants or dwellers.

One of the ways out can be explored through the struggle and victory of the Maroons in the hills of Jamaica, we have to be willling to fight for our collective freedoms in order to leave our children and their children’s children a safe place for all to live free of all oppression.

Previous Impeachment SHOCK, listen to how Nancy Pelosi explains how Democrats smear and lie
Next Leftist ignorance and black and white polarization in Politics – WND