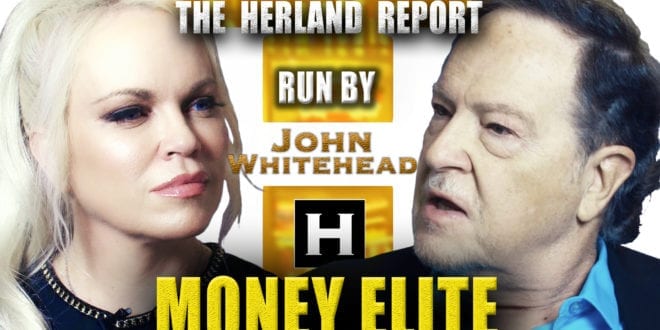 John Whitehead is the president of The Rutherford Institute and a constitutional attorney who has defended many against police brutality. He is one of the US’ leading voices for the American Constitution and the Bill of Rights, and a regular contributor to The Herland Report.

Since 1996, John W. Whitehead has taken on everything from human rights abuses in Saudi Arabia, protection of religious freedom, and child pornography, to family autonomy issues, cross burning, the sanctity of human life, and the war on terrorism in his weekly opinion column.

Buy one of his acclaimed books, Battlefield America here, a brutal critique of how the American society has developed further and further away from Constitutional freedoms.

Whitehead says: “There was a detailed study done by Princeton University in conjunction with Northwestern University in that country. The study indicated they studied 20 years of laws, regulations passed in Washington, D.C. The conclusion of a study was that we live in an oligarchy administered by, and run by, a money elite.”

Constitutional attorney, John Whitehead is a regular contributor to The Herland Report TV, watch our latest TV interview with him here and here.

NEW TV interview: We are run by a Money Elite: In the TV interview, found on Herland Report YouTube, John Whitehead states:

“Several years later after that, there was an FBI memo that mentioned this, some of FL. group that basically runs the country. It was leaked and it was subsequently called the deep state. So the question is always in any system, who is running the system, really?”

“Many people in the United States objected in the beginning because we did not have a Bill of Rights. It was mainly a structure of government. Some were afraid that the president would have too much power, the central government and the states were worried about that.”

Whitehead: “Some said that we had to get a Bill of Rights, or a real Constitution would not be ratified. Thomas Jefferson was one of them.”

“He wrote the Declaration of Independence, in which he said that our rights are there when we are born. We inherit those rights, they are God given.”

“We were created with certain absolute basic rights that the government cannot take away, and the purpose of government is to protect those rights.”

NEW TV interview: We are run by a Money Elite:

Whitehead: “The Bill of Rights were the first 10 amendments to the Constitution. They were added and form the rights that we have as citizens of the United States.”

“The five freedoms in our first Amendment are the right to free speech, the right to assemble and protest against the government, the right to religion and down the line, and a government that is free of establishing a religion.”

“You are talking to people who are going to law school at Harvard today and the big schools that have trouble telling us what the freedoms are and what they do not teach them.”

NEW TV interview: We are run by a Money Elite: “All these freedoms are being broken today with the police SWAT team raids we are seeing happening. I would say the most important amendment we have is our so-called Fourth Amendment, which is the right against unreasonable search and seizure by the government.”

“They cannot just grab you. They cannot search you on the streets and those kind of things. But routinely police are doing them today.”

“So. you have a people in America that has grown ignorant of the Constitution and ignorance is sliding down a very dangerous hill.”

NEW TV interview: We are run by a Money Elite: The Herland Report is a Scandinavian news site, TV channel on YouTube and Podcasts reaching millions yearly.

Founded by historian and bestselling author, Hanne Nabintu Herland, it is a great place to watch interviews and read the work of leading intellectuals, thought leaders, authors and activists from across the political spectrum.  Follow the trend and subscribe to our newsletter!

The Herland Report is founded by Hanne Nabintu Herland, a Scandinavian historian of comparative religions, bestselling author, commentator and TV producer. She is born and raised in Africa, has lived in Europe, South America, in the Middle East, and traveled extensively in Asia.

Previous WHO Confirms that the Covid-19 PCR Test is Flawed: Estimates of “Positive Cases” are Meaningless. The Lockdown Has No Scientific Basis
Next Exclusive interview with John Whitehead: Surveillance Capitalism and the End of Democracy