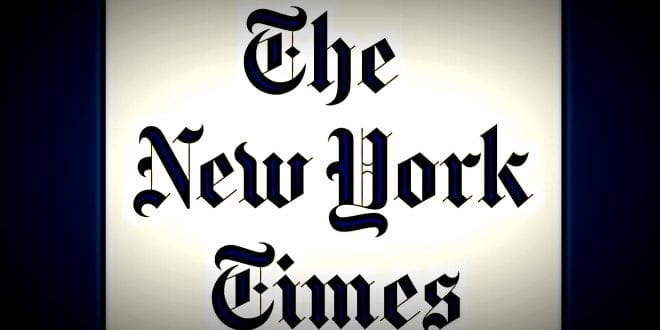 This confirms what veteran New York Times correspondents like James Risen have said: The American newspaper of record regularly collaborates with the US government, suppressing reporting that top officials don’t want made public, writes Ben Norton at Grayzone.

On June 15, the Times reported that the US government is escalating its cyber attacks on Russia’s power grid. According to the article, “the Trump administration is using new authorities to deploy cybertools more aggressively,” as part of a larger “digital Cold War between Washington and Moscow.”

In response to the report, Donald Trump attacked the Times on Twitter, calling the article “a virtual act of Treason.”

The New York Times PR office replied to Trump from its official Twitter account, defending the story and noting that it had, in fact, been cleared with the US government before being printed.

“Accusing the press of treason is dangerous,” the Times communications team said. “We described the article to the government before publication.”

“As our story notes, President Trump’s own national security officials said there were no concerns,” the Times added. Indeed, the Times report on the escalating American cyber attacks against Russia is attributed to “current and former [US] government officials.”

But what was entirely overlooked was the most revealing thing in the New York Times’ statement: The newspaper of record was essentially admitting that it has a symbiotic relationship with the US government.

In fact, some prominent American pundits have gone so far as to insist that this symbiotic relationship is precisely what makes someone a journalist.

In May, neoconservative Washington Post columnist Marc Thiessen — a former speechwriter for President George W. Bush — declared that WikiLeaks publisher and political prisoner Julian Assange is “not a journalist”; rather, he is a “spy” who “deserves prison.” (Thiessen also once called Assange “the devil.”)

What was the Post columnist’s rationale for revoking Assange’s journalistic credentials? Unlike “reputable news organizations, Assange did not give the U.S. government an opportunity to review the classified information WikiLeaks was planning to release so they could raise national security objections,” Thiessen wrote. “So responsible journalists have nothing to fear.”

In other words, this former US government speechwriter turned corporate media pundit insists that collaborating with the government, and censoring your reporting to protect so-called “national security,” is definitionally what makes you a journalist. This is the express ideology of the American commentariat.