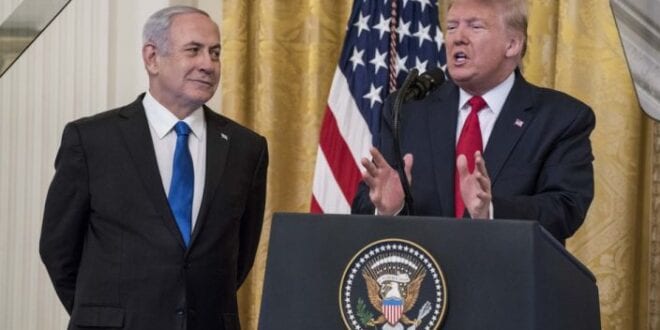 Herland Report: The most mainstream media demonized President in US history, Donald Trump has forged three peace deals in two weeks, a major break through in long term serious world conflicts, for which he may get no praise.

The news of the Israel/UAE deal came over a week ago, then news of the Serbia/Kosovo peace treaty. For both, President Trump in nominated twice for the Nobel Peace Prize 2021.

“President Trump has been nominated for the Nobel Peace Prize twice in the past week. His brokering of peace deals between Israel and the United Arab Emirates and the Serbia-Kosovo peace treaty. But before the ink was dry on those nominations, Trump does it again. On the anniversary of 911, it was announced that Trump had successfully brokered a peace deal between Israel and Bahrain,” writes Stephen Ahle at David Harris.

To add to the above, the new peace deal between Israel and Bahrain marks yet another break through, marking two spectacular weeks for the Trump administration.

As Trump launched his “America First” slogan, he began the  massive attack on the globalist billionaire’s empire that for decades has benefitted from the outsourcing to jobs and wealth to Communist China and the ultra-rich.

As Trump threatens to halt the unfair trade deals that China and the Western billionaire oligarchs has profited from for decades, at the expense of the American people, he will not be hailed anytime soon, regardless of how ever many peace deals he forges.

And what Americans do not realize, is the degree the Norwegian Nobel Committee is hijacked by the Democrat cabal.

Trump, hated by the globalist owners of the media

Nobel Peace Prize and Trump: Three major Peace Deals in two weeks: Israel/UAE, Bosnia/Serbia, Israel/Bahrain: Over 90 % of the US media is owned by only 6 corporations with widespread interest in the development of a globalist, transnational capitalist system that profits from lack of national sovereignty.

The globalist business model is dependent on weak nation states, that easily may be overrun by global corporations that crush the middle class and local businesses.

And globalism has worked, it has reinforced an international economic model that departs from the nation-based capitalist system and benefits the ultra-rich in an unprecedented scale. While the US government is trillions in debt, the ultra-rich in the US are, on the other hand, trillions of dollars in surplus.

Globalism has produced a system in which around 50 individuals now own over 50 % of world assets, only made possible by the transnational business model that refuses to redistribute wealth when outsourcing jobs to China and other cheap labor countries.

As President Trump fights to end the unbalanced business model that benefits only the rich, he is obviously cast as the “president from hell” by the owners of the mainstream media.

Nobel Peace Prize and Trump: Three major Peace Deals in two weeks: Israel/UAE, Bosnia/Serbia, Israel/Bahrain:  “Will Trump be nominated for a third time? And if he does, wouldn’t he be a lock to win it? He should be. And there is still time for more peace pacts to be announced before the election. You knew that once you were able to get someone to declare peace with Israel, others would follow.

The Palestinians tried to scuttle the Israel/UAE deal this past week at a meeting of the twenty-two Arab nations but this time the Arabs were not willing to bow to the will of the Radicals among them. They realize they gain much more being allied with Israel than they ever could with the Palestinians,” continues Stephen Ahle.

What Americans do not realize, is the degree the Norwegian Nobel Committee is hijacked by the Democrat cabal.

As respect for Alfred Nobel’s will is waning, the Committee has increasingly given the Prize to arguably whomever CNN, Washington Post or Hillary Clinton wishes for.

It is as though Alfred Nobel’s will hardly counts and the Norwegians are no more than an extended wing of the endless war strategy.

Human rights activists, climate activists and others have been given the Prize, even if their work does not lay within Alfred Nobel’s specific vision of peace bringing, as stated in his will. The Committee is under scrutiny for misusing it as a political tool to influence countries’ domestic policies.

Nobel’s family openly suggests that the prize should be returned to Sweden altogether due to the Committee’s lack of respect for the Nobel will. Family member, Michael Nobel has stated: “Alfred Nobel’s will from 1895 clearly states that the prize was to go to peace-makers, defined as persons who worked to prevent wars through fraternity, that is through global work for the disarmament of nations based on global justice and institutions.”

In the current neo-Marxist progressive climate in the Norwegian public sphere, the Committee members broadly lack international experience and some even finding it hard to speak English, are stuck in their provincial Oslo bubble where the only respected view to have is the regressive neo-Marxist illiberal Left.

I would assume Greta Thunberg, the 16 year old media puppet who is pushed by billionaires to end investment in oil, is as likely to get the 2021 Peace Prize as Hillary Clinton – or Obama for a second time. But not Donald Trump, regardless of how many world conflicts he resolves. The Peace Prize is as likely to go to some 15 year old from Bangladesh that no one ever heard of.

Hanne Nabintu Herland is a historian of comparative religions, bestselling author and commentator. She is the founder of The Herland Report news and opinion website which provides independent analysis from Western intellectuals, ground breaking YouTube interviews and Podcasts, cutting through the mainstream media rhetoric. This is a great place to watch interviews with leading intellectuals, thought leaders from across the political spectrum. Herland’s books include Respect, Det Nye Babylon, The Culture War. How the West lost its Greatness, and her latest, New Left Tyranny. The Authoritarian Destruction of Our Way of Life is available on Amazon, Barnes and Noble, across the USA and in 60 countries world-wide. New Left Tyranny shows how the neo-Marxist New Left turned their back on historical Western principles and became a destructive authoritarian force. www.theherlandreport.com
Previous America’s Color Revolution and How to Steal an Election
Next Top Emirati diplomat: Peace with Israel will better serve Palestinian cause