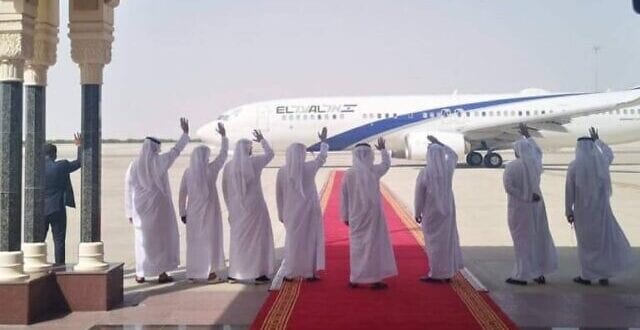 Herland Report: Young Emiratis are now excited to visit the Jewish state of Israel, stating that the Israel-UAE peace deal will serve the Palestinian cause as better relations will profit all in the region.

The Donald Trump brokered peace deal between Israel and the UAE is regarded as ground breaking. Trump is nominated by the Norwegian Parliament member, Christian Tybring-Gjedde for the Nobel Peace Prize for the accomplishment.

Times of Israel writes: Meanwhile, in a rare interview with an Emirati publication, Foreign Minister Gabi Askhenazi praised UAE leadership and called on the Palestinians to learn from the Emirates’ example of normalizing with Israel. (Feature photo: UAE officials wave as the first El Al Israeli flight leaves UAE to return to the Jewish state).

A day ahead of the official signing of the agreement in Washington, Omar Saif Ghobash, assistant minister for culture and public diplomacy in the UAE Foreign Ministry, said that Abu Dhabi would be able to influence Jerusalem as a partner on the Palestinian question, rather than remain on the sidelines.

“Our peace with Israel will serve the Palestinian cause in ways which we cannot predict today,” he told the country’s The National newspaper during an interview streamed live online.

“We will better be able to serve the Palestinian cause by having the direct relationship, by having the economic and commercial ties with the Israelis than by standing outside the tent and waiting for history to take its course,” he added.

“There are many, many Palestinian voices that need to be heard… That will come with time once we have an embassy, once we have a presence there, and once we have Palestinian Israelis come to the UAE as well. It’s going to be a really, really fascinating and exciting time,” he said.

Ghobash said he had always looked forward to the arrival of full relations with the Jewish state, “and perhaps like many Emiratis and many Gulf Arabs, this is something that I’ve always wondered about but never really been able to speak about.”

He said it felt that “a huge taboo” had been removed “from the way in which we can look at the Arab world and ourselves as well.”

The diplomat said he was pleasantly surprised by the number of Emiratis, particularly younger people, who had told him “how excited they are, how interested they are in Israel, how they want to learn about the people and the language and how they want to travel there.”

That approach, he argued, removed any agency from those countries. “We’re basically signaling that that kind of approach is over. We are agents of our own fate. We will fight for our own interests,” he said.

Ashkenazi’s interview with Abu Dhabi-based al-Ittihad newspaper was set to be published Tuesday. In excerpts released early, Ashkenazi praised UAE Crown Prince Mohammad bin Zayed, whom he called “a true leader who leads his people to prosperity and success.” The full article here.