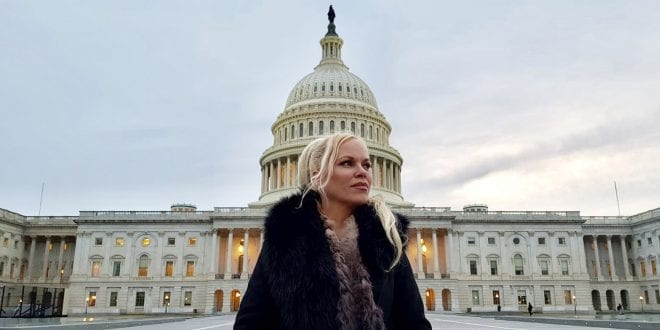 Herland Report: Politicized Gene Sharp riots is another attempted coup d’etat, writes Hanne Nabintu Herland: When Gene Sharp first wrote the manual on how to create a revolution, he probably did not expect that in 2020 his methods could be used in the attempt to overthrow the democratically elected US president, Donald Trump, writes historian and bestselling author, Hanne Herland. Buy her latest book New Left Tyranny here.

The tactics of infiltrating legitimate movements for political purposes follows the Gene Sharp manual From Dictatorship to Democracy:

Use a grievance that the local population has against the system, identify and support those who oppose the current government, infiltrate and strengthen opposition movements, fund them with millions of dollars, organize protests that seem legitimate and have paid political instigators dress up in regular clothes to blend in.

It happened in Maidan, Ukraine and the overthrow of the government, where mercenaries later said they were instructed by Americans to begin shooting.

It happened in Libya with the killing of Muammar Gaddafi. It happened in Syria, as “peaceful protesters” suddenly were not that peaceful after all, but turned out to be infiltrated by Al Qaida members and so on.

Now it is happening in the United States, where civil unrest unravels step by step according to the exact same Gene Sharp manual, even with bricks and stones administered to the raging demonstrators, just like what took place at Tahrir square in Egypt in 2010.

Politicized Gene Sharp riots is another attempted coup d’etat:  Twitter erupted with locals photographing the piles of bricks all across Texas, laid out along the path where demonstrations were to be held.

Instagram films show white young, black clad girls smashing windows, writing Black Lives Matter on walls being stopped by black women who asked them why they did this.

“We are going to be blamed for this looting,” said the young blacks to the white rioters.

A BBC documentary demonstrates the links between Gene Sharp’s alleged CIA material on how to overthrow governments, the CANVAS resistance in Serbia that led to the overthrow of the government and the Arab Spring revolutions.

Politicized Gene Sharp riots is another attempted coup d’etat:  BBC credits Gene Sharp as the man behind the toppling of Mubarak in Egypt, Milosevic in Serbia and Viktor Yanukovych in Ukraine, the Color Revolutions.

In 2009, Egyptians dissatisfied with the Mubarak leadership in Egypt went to Belgrade, Serbia to learn the Gene Sharp tactics that had worked so well there in overthrowing Milosovic.

The new method of professionalizing mass protests as a method to overthrow governments proved very successful in the Arab Spring. Journeyman even did a documentary on the massive Gene Sharp CANVAS success.

Foreign Policy: “Revolutions are often seen as spontaneous. It looks like people just went into the street. But it’s the result of months or years of preparation. It is very boring until you reach a certain point, where you can organize mass demonstrations or strikes. If it is carefully planned, by the time they start, everything is over in a matter of weeks.”

The murder of George Floyd seems abused by infiltrating political groups that intermingle with those rightfully protesting against racism, and cause looting and civil unrest that they know will be blamed on blacks.

The rightful grievance over racism against blacks is now used to get Trump since Russia Gate, Impeachment, the corona scandal and nothing else has worked. The aim is to end democracy in the United States, control Congress and politics and assemble the power into the hands of the very few.

The rise of the authoritarian New Left is described in my new book New Left Tyranny. The Authoritarian destruction of our way of life.

Politicized Gene Sharp riots is another attempted coup d’etat:  What the Black Lives Matter movement does not understand is that they are being used by the billionaire white capitalists who are fighting to push the working class even lower and end the national sovereignty principles that president Trump stands for in America.

It is all about who will own the United States and have free access to its revenues: Either the American people under democracy or globalist billionaire individuals. The rise of totalitarianism as socialists merge with capitalist interests to create state control in America is baffling to watch.

Before corona, the US saw the lowest unemployment rates among blacks in over 50 years. When Trump announced it during the annual State of the Nation address, Democrat Speaker of the House, Nancy Pelosi even refused to clap. Record low black unemployment apparently was nothing to her. As we all remember, it was the Democrats that fought for slavery, just read Candace Owens.

Previous George Floyd Protests: Is It Racism When Police Murder and Brutalize White People?
Next Christophobia in Europe, Religious Freedom in Russia – WND