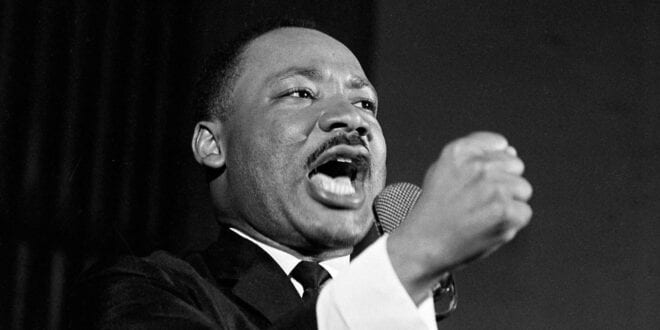 Herland Report: Hanne Nabintu Herland: In times of massive political upheaval such as what we are now witnessing, the German philosopher Hannah Arendt who lived to see World War II and the totalitarian Nazi regime up close is worth remembering.

Let me quote America’s great Christian prophet and martyr, Dr. Martin Luther King Jr., who discusses in his “Letter from The Birmingham Jail”, the same topics, in his treatise of just and unjust laws.

When questioning whether citizens should uphold and adhere to unjust laws when these violate the principle of justice for all:

“If the laws are just, this is no problem. But if the laws are unjust and represent a violation against certain minorities or the majority, while others are given the right to forcefully step on “the little man”, the laws become a problem. The legal system then becomes a problem, because it institutionalizes injustice.”

Hannah Arendt wrote The Origins of Totalitarianism in which she discussed how it was possible for a democratic state such as Germany to turn into a cold blooded totalitarian state.

Wasn’t modernism supposed to bring us closer to freedom for all? Instead the modern, atheist world has brought upon us more atrocities and Gulags than we all thought possible.

Arendt makes the point that a totalitarian system may become even worse than dictatorships, as the latter implements fear of death when speaking up against the authorities, but totalitarian states does the same, but in a more subtle way.

The aim in totalitarian systems is to control every aspect of a person’s life, his views on the family, genders, his feelings towards the church, religion – every aspect of life is to be controlled, writes historian, author and founder of The Herland Report, Hanne Nabintu Herland.

Martin Luther King Jr. and the Totalitarian State: In such states, the population is held in fear of repercussions from the police and state authorities, in constant fear of losing their jobs, their reputation, their friends.

Fear becomes the tool to keep the population in check. Nobody dares to say much, out of trepidation for what may happen then.

One of Arendt’s main points was that precisely because modern democracies incorporates well developed institutions and the hierarchical structure, people tend to obey orders without daring to think freely.

They view themselves as part of a system with little or no personal responsibility.

The Christian preacher Martin Luther King Jr. and the Totalitarian State: The question then becomes: Are the laws implemented just or unjust? Are new laws introduced in order to subdue the citizens, control them or deprive them of their natural rights?

Or are the laws just in the sense of upholding justice among the diverse groups within society, according to the Western, historic principle of equality, regardless of race, ethnic origin, gender, class, religious affiliation or status?

The distinction between laws that provide more freedom and justice and laws that ensure state censorship and fear, is of immanent importance. The value system in a society – its moral codex –is key.

Does our moral codex, be it the neo-Marxist or traditional Conservative or any in between, provide more justice to all? Or less justice between groups? Does it provide more respect for plurality or less?

Does it respect differences of opinion or not? What about diversity, are we allowed to be different and think differently? Does the moral codex motivate individuals for solidarity and empathy? Does it provide wealth to its citizens or only to the elites?

Can a wealthy individual buy its politicians? Will the justice system treat the widow and the fatherless the same way it treats its millionaires when appearing in court? All these questions become vital.

Arendt found that it was not the desire to be brutal to certain ethnic groups such as Jews and Gypsies, that was the root cause for the “obedience towards the state” that permeated the German society.

It was the indifference, lack of empathy and willingness to obey status quo that permeated the German population.

Since group think was vital in this society, no one dared to step out of the group. Those who did, quickly ended up in the same concentration camps where intellectual dissidents joined the Jews and others who were unwanted.

The point is that societies that cultivate just laws prosper.

The Christian preacher Martin Luther King Jr. and the Totalitarian State: Societies that allow the corruption of political powers, the rise of the few to own everything, the right of the few to pay and “buy” politicians, the gross neglect of certain subgroups in society to rot in ghettos for decades, the lack of public health systems, sufficiently good public schools, the lack of respect for law and order, the disdain for the moral codex that establishes right and wrong, the corruption of institutions so that the rich can pay his way to freedom, the lack of good leaders who care for the well-being of the population – these unjust societies do not prosper.

To again quote America’s great Christian prophet and martyr, Martin Luther King Jr.: “You (the authorities) express a great deal of anxiety over our willingness to break laws. This is certainly a legitimate concern.

One may well ask, “How can you advocate breaking some laws and obeying others?” The answer is found in the fact that there are two types of laws: there are just laws, and there are unjust laws. I would agree with St. Augustine that “An unjust law is no law at all.”

“We can never forget that everything Hitler did in Germany was “legal” and everything the Hungarian freedom fighters did in Hungary was “illegal.” It was “illegal” to aid and comfort a Jew in Hitler’s Germany. But I am sure that if I had lived in Germany during that time, I would have aided and comforted my Jewish brothers even though it was illegal. If I lived in a Communist country today where certain principles dear to the Christian faith are suppressed, I believe I would openly advocate disobeying these anti-religious laws.”

Luther King Jr. adds:” There was a time when the church was very powerful. It was during that period that the early Christians rejoiced when they were deemed worthy to suffer for what they believed. In those days the church was not merely a thermometer that recorded the ideas and principles of popular opinion; it was the thermostat that transformed the mores of society.”

“Wherever the early Christians entered a town the power structure got disturbed and immediately sought to convict them for being “disturbers of the peace” and “outside agitators.” But they went on with the conviction that they were “a colony of heaven” and had to obey God rather than man. They were small in number but big in commitment. They were too God-intoxicated to be “astronomically intimidated.” They brought an end to such ancient evils as infanticide and gladiatorial contest.”

So, let us return to the faith of Dr. Martin Luther King Jr. and install again the belief in a just society.

Previous Exclusive interview: US Bishop Harry Jackson says illegal immigration is New Slavery
Next The United States war on its own People