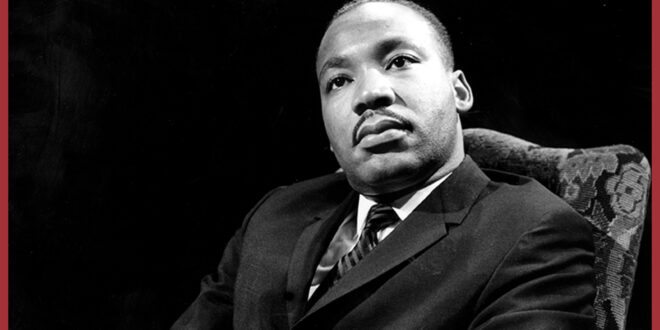 Herland Report: Somehow the Christian preacher, Dr. Martin Luther King, who later was martyred, is not so popular anymore. His message of justice, Christian values, non-violence does not fit well into the Marxist Black Lives Matter narrative.

Nor does it suit the current establishment, but that does not make these values less relevant. Precisely the quest for justice, yet done through non-violence would be a solution that could bridge the race gap.

As we live in an age of Western atheism and hatred towards the traditional, Christian values, we should even more remember how groundbreaking the Christian values of non-violence are, as explained Martin Luther King, writes historian Hanne Nabintu Herland in the regular World Net Daily column.

Over 80 % among Americans state that they “believe in God”, research showing that only 2.4 % of the world population are atheists – according to Pew Research Forum, ISSP 2008.

The masses believe in God. So, why are religion mockers allowed to control the mainstream narrative and with bullying tactics relentlessly work to belittle the Christian values that once made us great?

The Classical Christian Values of Martin Luther King Jr. under Massive Threat: Several of our most important values come precisely from the Judeo-Christianity heritage and its ethics. I have spoken at length about this in my book Trump. The Battle for America.

These are the very values that the Christian preacher, Martin Luther King Jr. stood for. In the current Marxist revolution in the United States, with Black Lives Matter leaders openly stating that they are Marxist atheists, the King message seems to be out of fashion.

Nobody wants to hear about the need to stop hating one another and build a future based on equality, regardless of race, ethnic origin, gender or religious affiliation.

The Conservative message of equality is no longer in fashion among US media editors, as the focus has deviated to skin color, race, “blackness or whiteness” at a level that reminds us of Germany 1944.

The Classical Christian Values of Martin Luther King Jr. under Massive Threat: Professor at Yale and Harvard, historian Robert R. Palmer and Joel Colton state in A History of the Modern World that Christian philosophy defined the concept that humanity is inclusive of all people, regardless of race and creed. This represented a new view on the value of human life and was truly revolutionary.

Palmer states that it is simply impossible to exaggerate the importance of Christianity’s influence on Western values.

Without Christianity, we would not have had the principle of equality, which unleashed the revolutionary idea that each man, regardless of class, gender, and race, has a unique value. This is the very Western value that Marxist Race Theory seeks to uproot.

One of the founding values in Christianity is the requirement to love one another, regardless of class, creed and gender.

German philosopher and atheist, Jürgen Habermas states in The Dialectics of Secularization: On Reason and Religion that secular moral political theory has made a grave mistake in excluding Christian ethics, as these have in history demonstrated its ability to motivate individuals to do good.

Somehow, Christianity has been able to motivate the individuals that together compose our society to care more for one another.

These were the precise values that the Christian preacher and civil rights’ icon, Martin Luther King Jr. fought and was martyred for.

In the Birmingham jail letter, he writes: “I gradually gained a bit of satisfaction from being considered an extremist. Was not Jesus an extremist in love?—“Love your enemies, bless them that curse you, pray for them that despitefully use you.” Was not Amos an extremist for justice?—“Let justice roll down like waters and righteousness like a mighty stream.”

“Was not Paul an extremist for the gospel of Jesus Christ?—“I bear in my body the marks of the Lord Jesus.” Was not Martin Luther an extremist?—“Here I stand; I can do no other so help me God.” Was not John Bunyan an extremist?—“

The Classical Christian Values of Martin Luther King Jr. under Massive Threat: I will stay in jail to the end of my days before I make a mockery of my conscience.” Was not Abraham Lincoln an extremist?—“This nation cannot survive half slave and half free.”

Was not Thomas Jefferson an extremist?—“We hold these truths to be self-evident, that all men are created equal.”

The martyred Dr. Martin Luther King Jr. questioned why the white moderate did not stand up against injustice with him:

”We will have to repent in this generation not merely for the vitriolic words and actions of the bad people but for the appalling silence of the good people. We must come to see that human progress never rolls in on wheels of inevitability.

It comes through the tireless efforts and persistent work of men willing to be coworkers with God, and without this hard work time itself becomes an ally of the forces of social stagnation.”

So, let us all join forces, hold up our Bibles and produce a better society.

Previous Mass Disinformation: The Frustration of Ingrained Lies in Historical Explanations
Next The Social Credit System is the Elite’s Means of Control