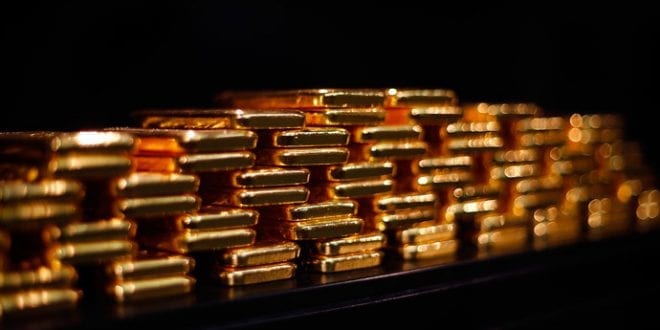 The Quest for Gold and Oil: Syria Lost.. Lebanon’s Gold is Next

Herland Report: Steve Brown: The largest reserve gold traders on the planet are the six bullion banks. A bullion bank is a large multi-national bank authorized to serve as a conduit through which Central Banks – and the Fed primary dealers – loan their gold out into the market.

All central banks lease gold, to maintain their balance sheet and to provide sovereign collateral when a currency swap or paper trade won’t work. It’s called the gold carry trade.

Read more here about where gold comes from and why this precious metal is such a valuable commodity.

There are currently six clearing banks on the LBMA handling gold lease transactions: Barclays, Scotia, Deutsche Bank, HSBC, JPM, and UBS all of which are primary Fed Dealer Banks, too.

Central Banks need real money as collateral – physical gold holdings – to back paper (debt instruments) and as guarantor of foreign exchange sovereign liquidity, or when dealing with failed or semi-failed states, writes author, commentator and scholar on the US monetary system, John Steve Brown for The Herland Report.

The Bullion Banks not only guarantee and lease their own gold reserves, but require adjustments to physical gold holdings based on Geopolitical events particularly during times of war.

For example, Libya, Afghanistan, Iraq, Syria, Egypt and the Ukraine have all turned over their physical gold holdings to the IMF – which acts by proxy for the Fed and G7 Central Banks – for favorable lending terms or settlement of debt to the West, or their gold is seized by force of arms.

Nixon officially closed the US international sovereign gold trading window in 1971, alleged to be temporary, now ostensibly never to re-open.

Officially Nixon’s gold closure still applies to US gold trading, but the “official” world is not the real world. Thus, the US engages in gold trading shrouded in secrecy, generally by proxy to the IMF and via gold carry trade foreign gold swaps. (Also see: IMF voting rights and reform and the Exchange Stabilization Fund)

The international gold window is not about a “gold standard” but about international trade in gold. That trade is to support currency swaps to manipulate currency markets; to enhance interest returns by leveraging other debt products providing a higher return; or to build or deplete foreign exchange reserves held by a sovereign or Central Bank.

Thus, the international gold window still exists in the form of the gold carry trade.

The gold carry trade market also operates by acquiring the gold reserves of failed states such as Iraq, Libya, Syria, Afghanistan, or Ukraine, at prices subsidized by the US taxpayer.

Or the cost of their lost treasure is borne by the unknowing, unaware local population partaking in a “colour revolution” or the “Arab Spring” for example, on behalf of Washington.

The banking crisis in Lebanon is one recent example, where geopolitics and finance – especially relating to gold – intersect. Lebanon has relatively high physical gold reserves relative to its economy and relative to other Middle Eastern states, and Lebanon has been a player in the carry trade for many years.

The reason for Lebanon’s de-leveraging in the gold carry trade is unknown, but one can only speculate that along with US sanctions versus Lebanon, the international currency cartel has its eye on Lebanon’s gold reserves. By extension, The Neocon-Neoliberal ‘Blob’ believes that by harming Lebanon, the Blob can likewise curtail Hezbollah’s influence.

Israel too, currently subject to its own self-induced purgatory in leadership, desperately needs a visible geopolitical victory, and no doubt US and Israeli central bankers see Lebanon’s finance as low-hanging fruit, since Hezbollah cannot be militarily defeated. How do we know? …well, David Ignatius tells us so.

The International Gold Carry Trade is seldom, if ever discussed in the media, the Bullion Bank carry trade in gold – or gold trading sanctions to US-perceived miscreant states such as Iran or Russia – are key to maintaining the global hegemonic. And the mechanism by which US gold trades occur can be linked to the IMF; to bullion banks; to gold lease operations arranged by US Client States; or even via the Bank of International Settlements.

However, by leveraging foreign gold swaps, the US can trade actively in gold; and the US Exchange Stabilization Fund has stated publicly that it can trade in any venue and with any asset it so chooses, regardless of US law.

That Germany leased approximately 300 tonnes of gold to the US Exchange Stabilization Fund during the US financial collapse is well known, and the ESF undoubtedly disposed of that German gold by carry trade means, to support the US dollar and stock market.

Effectively the US government may sell or lease any “commodity” as it sees fit, in its possession, whether strategic oil reserves or gold – even if that gold “belongs” to a foreign power.

In the case of foreign gold trading – not officially considered a US strategic reserve – an act of Congress is not required. Likewise, leased German gold is not US-owned gold, and even as a foreign asset may be treated as an asset of the United States while in its control (check that out).

To the point, it is exceedingly likely that the Federal Reserve leased (sold) German gold on behalf of the Treasury (via the ESF), based on the original timetable set by the Fed for the gold’s return to Germany.

We may arrive at this conclusion because by June of 2104, Germany announced that it did not want its gold back after all…! oh wait, until 2020. Oops, sorry folks, nothing to see here, move on please…

The precise reason for the above failure of US gold repatriation to Germany at the time Germany demanded it is still shrouded in mystery, with political rhetoric and alarming public statements about the condition of the euro seen as political cover.

But the German gold repatriation affair is all the proof needed with regard to US dealing in the transfer, leasing, purchase, accumulation and sale of physical gold reserves… and not just those “belonging” to the US, Richard Nixon be damned. (The ESF can trade in anything.)

There are many other examples of the international gold window in operation, from the pointless provocations that led to the USSR’s invasion of Afghanistan in 1979 (the US eventually got Afghani gold) to Syria, to Libya, to Lebanon, to Egypt, to Iraq, Argentina, Venezuela, and of course Lebanon as described above.

Long a hotbed of corruption, shady dealings, and political intrigue, the Ukraine has leveraged its gold reserves via the carry trade and leasing system for many years now.

Falling prey to the IMF predatory system of capital is another Ukraine specialty, since Ukraine’s gold is its only real strategic asset, besides it location adjacent to Eastern Europe.

Needless to say, wherever the Bretton-Woods last bastion IMF is concerned, things have not gone well for Ukraine after surrendering its gold to the west. For the short-term gain of an IMF loan, the Ukraine was then in hock to Washington without a gold reserve to provide financial leverage. Fortunately for the people of the Donbass, this has limited Ukraine’s ability to wage its aggressive war in the eastern region of the country.

Likewise, the IMF was the worst possible option for Argentina. Argentina was forced to sell 1/3rd of its physical gold reserves from 2009-2013, to prevent a replay of 2001 by placating US bond holders.

In 2014 the Dutch Central bank announced that 122 metric tonnes of gold had been repatriated from the United States.

The DCB’s loss of confidence in the US likely relates to the collapse of the US financial system from 2008-2009. It’s likely too that the Netherlands loaned some sovereign gold reserves to the Fed/ESF during that crisis, and has not seen its gold returned.

Half of Venezuela’s reserves are in gold. The structural and fundamental problem is that Venezuela cannot lease gold via the bullion banks because the physical gold was repatriated, and the gold still present in US /London vaults is sanctioned.

The physical gold must be in the possession of the bullion bank for it to be leased, which effectively means the gold is sold and then bought back later on, at the end of the lease.

That’s why the financial press describes Venezuelan reserves as being “tied up in gold” – and will not tell you that King $ Incorporated mandates that freeze until the west can take Venezuela’s gold.

Trouble is, most of the third world and Non-Aligned Movement – with the exception of Iran, Lebanon, and Venezuela – have already turned over their gold to the West.

So, there is little physical gold for Washington to cajole, appropriate, or steal from destabilized sovereign entities or failed states Washington creates.

Also consider that the United States has been on the oil standard since ditching gold in 1971, because oil is traded in dollars like real money once was (gold).

Where oil is fungible, portable, a unit of account and divisible, durable, rare… but most importantly has real intrinsic value — unlike paper currency.

Should the United States exit the oil standard in King Dollar mode, some other standard must then provide a foundation for trade; and of course, that foundation is partly the subject of this paper, namely the international gold window.*

As global tensions rise, currency wars rage, and global trade becomes threatened by monetary imbalances, the US Dollar has become the ‘linchpin’ of the international gold window in the event the oil standard and dollar become disassociated. Of course

The survival of the USD as global monetary hegemon via US theft of gold is of most concern to States like Lebanon, and Washington’s financial and military targets.

*NB: The gold window is not to be confused with a ‘gold standard’