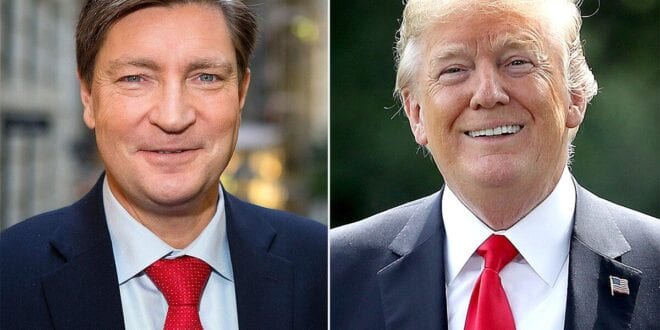 Herland Report: Exclusive to WND: Hanne Nabintu Herland on how the Norwegian Nobel Peace Prize Committee is controlled by the ‘neo-Marxist illiberal left’ who steer Norway according to the 1968-ideology.

The groundbreaking peace agreements between Israel-UAE and Kosovo-Serbia were brokered by President Donald Trump, for which he is nominated twice for the 2021 Nobel Peace Prize.

I congratulate the president; he so deserves it. Trump has forged three peace deals in two weeks, adding Israel-Bahrain to the above, all major breakthroughs in long term conflicts, writes historian of comparative religions and author, Hanne Nabintu Herland, columnist at WND.

It was the honorable Norwegian Parliament Member Christian Tybring-Gjedde who nominated Donald Trump, emphasizing his efforts toward resolving the decades-long conflicts between Israel and Arab nations, as well as conflicts worldwide.

Trump deserves the Nobel Prize – but don’t book a flight to Oslo as neo-Marxists control the Committee: Fox News reports:“‘For his merit, I think he has done more trying to create peace between nations than most other Peace Prize nominees,’ [said] Tybring-Gjedde, a four-term member of Parliament who also serves as chairman of the Norwegian delegation to the NATO Parliamentary Assembly.”

Tybring-Gjedde, who also nominated President Trump in 2018, points out that the president has played a determining role in the establishment of relations between the state of Israel and the United Arab Emirates.

This has come following the remarkably good relations between Israel and Saudi Arabia in recent years.

“As it is expected other Middle Eastern countries will follow in the footsteps of the UAE, this agreement could be a game changer that will turn the Middle East into a region of cooperation and prosperity,” Tybring-Gjedde wrote.

Alfred Nobel’s will clearly states that the Peace Prize is to be, “annually awarded to the person who shall have done the most or the best work for fraternity between nations and the abolition or reduction of standing armies and the formation and spreading of peace congresses … advocates of peace, have conferred the greatest benefit on mankind, the most worthy shall receive the prize.”

Yet, due to reported politicization within the Norwegian Nobel Peace Prize Committee, notoriously in favor of the Democrat cabal, the president is not likely to get the Prize, even if he averted a World War.

As respect for Nobel’s will is waning, the Committee has increasingly given the Prize arguably to whomever CNN, the Washington Post or Hillary Clinton wishes.

It is as though Alfred Nobel’s will hardly counts and that the Norwegians are no more than an extended wing of the endless war strategy.

Human rights activists, climate activists and others have been given the Prize, even if their work does not lay within Nobel’s specific vision of peace bringing, as stated in his will. The Committee is under scrutiny for misusing the Prize as a political tool to influence countries’ domestic policies.

Nobel’s family openly suggests that the Prize should be returned to Sweden altogether due to the Committee’s lack of respect for its namesake’s wishes.

Family member Michael Nobel has stated: “Alfred Nobel’s will from 1895 clearly states that the prize was to go to peacemakers, defined as persons who worked to prevent wars through fraternity, that is through global work for the disarmament of nations based on global justice and institutions.”

In the current neo-Marxist progressive climate in the Norwegian public sphere, the Committee members broadly lack international experience, and some even finding it hard to speak English are stuck in their provincial Oslo bubble where the only respected view to have is that of the regressive neo-Marxist illiberal left.

I would assume Greta Thunberg, the 16-year-old media puppet who is pushed by billionaires to end investment in oil, is as likely to get the 2021 Peace Prize as Hillary Clinton – or Barack Obama for a second time.

But not Donald Trump, regardless of how many world conflicts he resolves. The Peace Prize is as likely to go to some 15-year-old from Bangladesh no one ever heard of.

President Donald Trump is, of course, a far more worthy Nobel Peace Prize winner than Obama ever was. Simply by actively and continuously attempting to pull U.S. forces out of Syria – yet being resisted by the U.S. Military Complex – the work to end the North Korean crisis, the efforts to end the Kashmir crisis and the persistent push to solve the Israel-Palestinian issue, Trump deserves it.

If any time was the right to award him the Peace Prize, it would be when Arab nations such as the United Arab Emirates acknowledge the existence of the state of Israel.

Trump deserves the Nobel Prize – but don’t book a flight to Oslo as neo-Marxists control the Committee:  White House senior adviser Jared Kushner has stated that the deal between the two nations may be the beginning of a major change in the Middle East. Jews have been a part of the multicultural and multi-religious Middle East for thousands of years.

To deny Jews their rightful place in their region of inheritance simply speaks for the deep-rooted level of anti-Semitism that sadly permeates the environment. Will the Norwegian Committee be cowards this year too, or will we see Donald Trump in Oslo soon?

Hanne Nabintu Herland is a historian of comparative religions, bestselling author and commentator. She is the founder of The Herland Report news and opinion website which provides independent analysis from Western intellectuals, ground breaking YouTube interviews and Podcasts, cutting through the mainstream media rhetoric. This is a great place to watch interviews with leading intellectuals, thought leaders from across the political spectrum. Herland’s books include Respect, Det Nye Babylon, The Culture War. How the West lost its Greatness, and her latest, New Left Tyranny. The Authoritarian Destruction of Our Way of Life is available on Amazon, Barnes and Noble, across the USA and in 60 countries world-wide. New Left Tyranny shows how the neo-Marxist New Left turned their back on historical Western principles and became a destructive authoritarian force. www.theherlandreport.com
Previous Olav den Hellige: Hvordan kristne vikinger reformerte Norge – Anders Kvåle Rue, Øystein Rivrud
Next The Magnitsky Act, Bill Browder, Andrei Nekrasov and the art of Deception