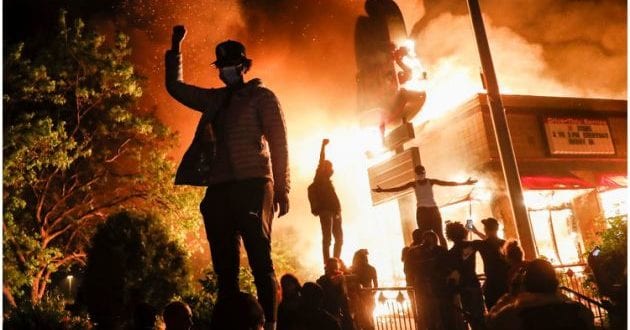 Why does America neglect its own, generation after generation? Keedran Franklin

Herland Report: Why does America neglect its own, generation after generation?  Massive riots are ongoing in downtown Minneapolis, Houston, Atlanta, Phoenix and over twenty other cities in the United States post the George Floyd killing.

The death of 46-year-old George Floyd came after police officer Derek Chauvin kneeled on his neck for eight minutes and 46 seconds. Floyd begged for his life, repeatedly saying *I cannot breathe* before falling unconscious and dying in the street. Mobile cameras recorded his death in full view of witnesses.

In Minneapolis, the protesters showed no sign of leaving, even after the imposed curfews.

The eruption of riots and the nation wide demonstration of rage must have been expected, as police brutality and the militarization of US police with SWAT teams has been building up for years.

Tensions between the black communities and the police did not start with the death of George Floyd. They have been years in the making.

To take but one example: Ever since the introduction of drugs to the black communities in the 1950s, many have watched the tragedy unfold as public America seems to have little care for the welfare of its inner city groups.

While billions are spent overseas going to war in the Middle East and other places, the black communities and the American working class have steadily seen a diminishing living standard. The top point for the middle class in the US was 1987, since then, degeneration.

When higher education and better opportunities were needed, the ghettos of America deteriorated into a culture of rampant drug abuse.

The central question is: Who fed these groups the narcotics? Who benefited from the generations of blacks lost to drugs?

Why did not the US police stop the rampant drug industry? Why is the police still not stopping it?

Why is the affluent rapper culture top performers today in the United States still allowed and encouraged to push the focus on drugs, knowing how their influence keep destroying black lives?

Black Lives Matter. The organization first arose to the challenge to answer these questions, to address the ongoing injustice for generations. While the Black Lives Matter then became politicized, it still does not take away the initial need and just focus on these issues.

Why does America neglect its own, generation after generation?  The killing of George Floyd is the latest, but one among many police murders the past years in the US. His killer, Derek Chauvin, was not arrested, but only sacked from the job, until the riots forced the police to react.

“I can’t breathe,” chanted demonstrators, the last words of George Floyd and also Eric Garner, a black man who died after being held in a police chokehold in New York in 2014. The video of the Floyd murder leaves no doubt about the violation of his rights, as president Trump also tweeted about.

The ongoing cases of police brutality keep coming and coming. The Michael Brown case in 2014 caught national attention, riots prevailed for quite some time. The destruction of Minneapolis and other down town areas in American cities now reflect the reaction against long term injustice.

Why does America neglect its own, generation after generation?   Fronts are hard, pro- or con organizations such as the Black Lives Matter, especially in the hard-line racial divisiveness that now characterize the United States. Black Lives Matter address a variety of issues, from police brutality to the prison industry and racism against blacks in America.

“Police brutality is becoming the norm in America, it is militarized now,” says  Keedran Franklin to Herland Report TV on YouTube. He is a community organizer, Black Lives Matter leader, co-founder of the Memphis Coalition of Concerned Citizens, motivational speaker and a strong advocate against police brutality.

Keedran Franklin: “In America, so-called black people are being shot down and beaten like dogs in the streets and that needed to be addressed with tangible recourse. For example, Mike Brown Jr., who was shot and left in the hot sun on the ground for over 4 hours. The normalization of police brutality is a very dangerous development.”

“One of the elements we are now fighting for is a livable wage. You have the top capitalists making so much, but others, who work hard and break their backs and produce the products, are at the very bottom, barely getting by.”

“You have people working for 7.25 USD an hour, barely getting by, working two or three jobs. Think about that! This leaves their children fending for themselves, doing other things in trying to create ways of making money. It is not a great system.”

“We are just pushing at the powers that beat us, saying pay attention to us! Listen to our grievances, see how we live! In 2016, we had one of the biggest actions that the South has ever seen where we shut down the Hernando De Soto bridge demanding prosperity, demanding to be treated equally.”

“You hear it all over the country where people are being suppressed and oppressed due to poverty and low wages. They killed Martin Luther King in 1968, 50 years later they are still doing the same thing. Think about that. It is a big deal to continue the fight. We want to exercise our right to freedom of speech, but are treated like criminals.”

As Aldous Huxley recognized in his foreword to A Brave New World: “It is perfectly possible for a man to be out of prison and yet not free—to be under no physical constraint and yet be a psychological captive, compelled to think, feel and act as the representatives of the national state, or of some private interest within the nation wants him to think, feel and act. . . . To him the walls of his prison are invisible and he believes himself to be free.”

Why does America neglect its own, generation after generation?  Also check out these topics at CNN or FOX News. Other sources may be New York Times, USA Today, the Washington Post or from the British angle, BBC, The Guardian, The Telegraph or Financial Times.

Previous How Texas got out of the Covid lockdown recession
Next Founder of Black Lives Matter resigns after learning “ugly truth”: BLM is not about rebuilding black families