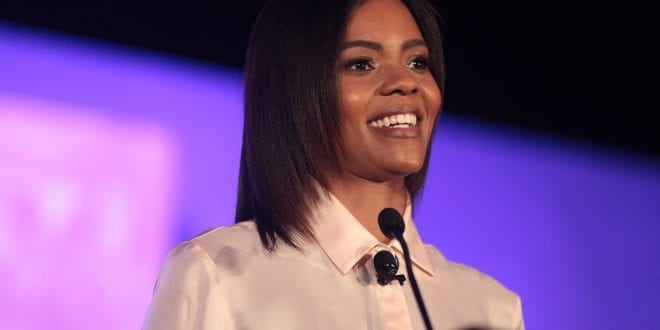 Herland Report: Why does Black America hail criminal George Floyd as hero and martyr, asks Candace Owens: Candace Owens is an American free thinker who has become immensely popular for stating that Democrats are abusing Black Americans by inciting them with a “victim mentality” in order to use their votes to their own benefit.

She implies that the victimization of an individual – or saying that he automatically is “a victim” – based on skin color implies racism, the judging of someone solely based on the color of their skin.

She openly calls it racism and denigrating to blacks that Democrats automatically thinks that black Americans are “victims”.

On June 3rd, she released a Facebook video in which she refuses to look upon the victim of police brutality, George Floyd as a hero and martyr for the black American community.

She questions whether the George Floyd movement is infiltrated by forces that are actually working against the interests of black America.

Candace Owens states that she believes police officer Derek Chauvin should be prosecuted to the fullest extend of the law, she doesn’t agree that Floyd should be made out to look like a hero.

Why does Black America hail criminal George Floyd as hero and martyr, asks Candace Owens: “Sometimes it can be very difficult to say your opinion, when there are so many external pressures,” says Candace Owens, leader of #Blexit, her book BlackOut can be pre-ordered here.

Owens asserts that the newly killed, George Floyd, is not her hero and she questions why Afro-Americans are the only culture that hails criminals as their hero and martyr.

Why does Black America hail criminal George Floyd? She questions the driving forces behind the riots, saying that while the Floyd death was tragic, the policeman who choked him is arrested and justice will be served.

She also extends her best wishes for the Floyd family, yet questions why a criminal like him now is becoming the hero for the Black American community.

Candace Owens says that we are all being sold so many lies, to the detriment of both the black and the white community, that she had to step forward and speak her mind on the creating of a hero of a criminal like George Floyd.

She asserts that she does not support George Floyd and the media depiction of him as a martyr for Black America. The Black American author Shelby Steele says that the black culture community is unique because it is the only community that caters to the bottom denominator of society.

The Owens argument is that even though – obviously – not every black American is a criminal, but the afro-American community is the only culture that fights, screams and demands justice for the people in that community that are up to no good.

She says you will be hard pressed to find a Jewish person who has been five times in jail for crime, who commits a crime and dies committing a crime and whom the whole Jewish people then champion and demand justice for.

Owens says the same would be true for white America, Latino America or others.

Candace Owens: “I am not going to accept the narrative that this is the best the black community has to offer. For whatever reason it has become fashionable over the past 5-6 years to turn criminals into heroes over night. This is something I find despicable.”

Why does Black America hail criminal George Floyd as hero and martyr, asks Candace Owens: “George Floyd was not an amazing person. When arrested, he was high on fenthanol and methamphetamine. the 9-11 transcripts describes someone who was out of his mind high, both autopsy transcripts show this too.”

“A white bag, seemingly cocaine or something white, fell out of his pocket when arrested. The media is refusing to show it, but it is all over Twitter. He had drugs on him at the time of his arrest.”

“Everyone is pretending that this man lived a heroic life style, but he didn’t. He should not be looked upon as a martyr. He was an example of a violent criminal his entire life.”

“White people represent 60 % of the population, blacks 13 % of the US population. What matters is the percentages among the violent crime community you represent.”

“Regarding the percentages within the criminal community, sadly, black communities represent a disproportionate level of crime compared with the white community.”

“Black men 6 % of the population account for 44 % of the murders, according to 2018 statistics. We are extreme minorities and still commit 50 % of all violent offenses, evenly split. So, we have a lot more encounters than whites.”

“A police officer is 18 times more likely to be killed by a black person than the other way around, according to statistics. So, this narrative is completely a smoking mirror, it is completely made up. It is because it is election year.”

Why does Black America hail criminal George Floyd? Also check out these topics at CNN or FOX News. Other sources may be New York Times, USA Today, the Washington Post or from the British angle, BBC, The Guardian, The Telegraph or Financial Times.

The Herland Report Scandinavian news site, TV channel on YouTube and Podcasts have millions of readers/viewers yearly. It is a great place to watch interviews and read the articles of leading intellectuals, thought leaders, authors and activists from across the political spectrum. The Herland Report believes in freedom of speech and its editorial policy resides above the traditional Left vs Right paradigm which we believe has lost its relevance and ability to describe the current driving forces in Western politics.
Previous Christophobia in Europe, Religious Freedom in Russia – WND
Next End the lockdowns, 600 doctors implore president Trump, writes Dr. Ron Paul