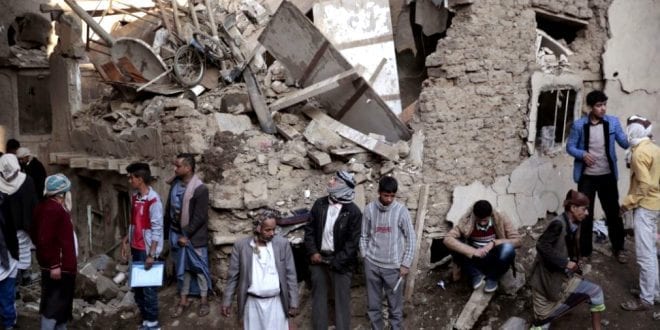 Empire spooked by peace talks in the Middle East: Saudi, Iran and the war in Yemen

Herland Report: Peace talks in the Middle East: Fruitless talks between Saudi and Iran have been ongoing for some months now.

But the idea of ongoing talks to reduce tension in the region seriously spooks Empire, where any minor thaw in militarist tone gets alarm bells ringing inside Washington’s war machine.

According to my source, the ongoing probe for rapprochement is largely for show, and perhaps related to strategic posturing in respect to Washington’s pointless pursuit of a revived JCPOA agreement with Iran, an agreement that the US regime abandoned, writes author, commentator and anti-war activist, Steve Brown for The Herland Report.

News of ongoing Iran-Saudi discussions coincided approximately with a retaliatory Ansarullah strike on abu Dhabi. Due to its illegal trade in gold, as well as its oil trade, arms trade, and relations with the US and western war machine, abu Dhabi is the richest city in the world.

The retaliatory Ansarullah strike on it was to avenge the UAE Emirates Giants Brigade escalation in Yemen’s north at Saudi behest.

Peace talks in the Middle East: The Houthi strike killed three migrant workers and damaged the airport and must have at least given the Machiavellian princes some pause for thought*, also causing the United States to warn its subjects about travel to the UAE.

Two more subsequent and evidently failed attacks were tried, when the president of Israel was making a first-ever visit to the fiefdom. Thus the strikes came at a particularly embarrassing time for the US’s golden Sheikh.

Further complicating reports and bin Zayed’s somewhat exposed position, is a group in Iraq which has claimed credit for drone attacks – but not a ballistic missile attack – on the fiefdom.

Peace talks in the Middle East:  For America’s gold-plated Princeling and the Sheikh, one good retaliation deserves another. So al Saud- bin Zayed launched their F15’s against Sana’a, downing Yemen’s internet access for one week, also killing an unknown number of civilians.

The Saudi-Emirati attack on that prison barely made any news in the west, where the fiefdom’s Sheikh and his bone saw-wielding friend have a very strong hold over Wall Street’s Vanguard Group, and its Fed-funded henchmen, who collectively own and operate the western media.

The chemistry of Salafist aggression in Yemen is quite interesting, where a supposed rift between deadly Prince bin Salman and the corrupt golden Sheikh (both US allies) has been theorized about, but is fiction prima facie.

Washington of course prefers its front for takfiri terror in Asia, and the Middle East, to be portrayed as a united front, a policy developed and evolved by US State and its overlords over many decades.

As such, greater al Saud-UAE cooperation to destroy Yemen must be inspired by Washington dollars defacto, because it makes no sense to transfer UAE Southern Council “Giants Brigade” takfiri terrorists from Hodeidah (west) to the North Shabwah/Mareb — at great cost and only to Saudi advantage — unless Washington’s dollar manufacturing machine is somehow engaged.

Washington’s goal is to reinforce the failing Saudi-bought Sudan-African mercenaries only motivated by riyals to fight (at times) for the Princelings in the north, versus the people of Yemen.

The atrocity of western aggression in Yemen is supported by the vassal states who supply the west with their oil, and host US military bases locally, whether Prince Sultan base in the Kingdom, or Air base Al-Zafar (al Dhafra air base) in the fiefdom.

The current US regime needs Saudi oil more than ever and pressure for US aggression to protect the brutal monarchies of the Gulf is greater than ever… as domestic US oil supplies falter and fade.

The foregoing has caused, in part, the former United States to supply new and advanced weaponry to the Saudi-UAE terror regimes, including a missile destroyer on patrol.

Of course coloring the entire picture is Washington’s hatred for Iran. (How else to put it?) Washington is as convinced that Iran substantially backs Ansarullah, as it is convinced that Russia is about to invade Ukraine. And along with the Bad Actors the US has traditionally supported, Washington’s hegemonic cocktail is now more than toxic.

Peace talks in the Middle East:  Yes, America’s foreign policy psychosis has been on full view for seventy plus years, from Korea then Cuba to Vietnam; to Lebanon, Iraq, Libya and Syria and Gaza, with Yemen just another atrocity inspired by the global hegemon, a hegemon that was never prepared to be or deserved to be.

Whether by megalomania or by doddering but dangerous old fool, US terror and aggression is as extant and lethal in the world now as it has ever been, regardless of false dilemma regime in power. Whether “left wing” or right. And where Neo-corporatism State Capture is complete.

*Emirati dictator bin Zayed has supported Salafi terrorists in Yemen for many years; just as al Saud has supported takfiri terror all over the world for decades.