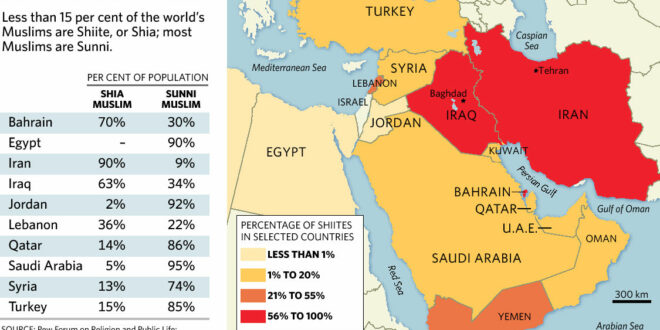 A Saudi-Iran alliance: Fanaticism at the service of the United States?

Herland Report: A Saudi-Iran alliance: Since President Joe Biden took office, the United States has attempted to engage in negotiations with Iran to restore the secret agreement it signed under President Barack Obama on the sidelines of the Iranian nuclear negotiations.

Let us remember that the 5+1 negotiations (the five members of the Security Council + Germany) with Iran began in 2013 in Vienna; that they quickly found an agreement in principle and were then interrupted.

In the West, the agreement is seen as ending Iranian military nuclear research, but in reality some of the signatories never believed that the Islamic Republic of Iran had pursued the monarchy’s military program beyond Ayatollah Rouhani Khomeini’s fatwa banning the weapon as un-Islamic.

A Saudi-Iran alliance:  Despite repeated accusations by Israel and the documents that Mossad managed to steal from Tehran, there is nothing to date to contradict the Iranian position. At most, it has planned to manufacture a shock wave generator [1]. Tehran dismantled its military nuclear program in 1988 and has never restarted it.

From this point on, it appears that the two years of negotiations in Vienna were not aimed at dissipating a non-existent nuclear threat, but at framing the secret bilateral US-Iranian negotiations.

These were led on the U.S. side by three negotiators who have become pillars of the Biden administration: William Burns (current director of the CIA), Wendy Sherman (current deputy secretary of state) and Jake Sullivan (current national security advisor).

A Saudi-Iran alliance: As in 2013-15, the negotiations aimed at restoring the 5+1 agreement mask other negotiations, this time between Saudi Arabia and Iran. They have just reached an agreement in principle.

The opposition between Sunnis and Shiites has always existed, but it is wrong to assume it. It has its roots in the conflict over the political succession to Muhammad, the founder of Islam, who was also the ruler of Mecca and Medina. But the current religious and political conflict did not always exist.

In modern times, relations between Riyadh and Tehran have fluctuated. Saudi Arabia supported Iraq during its war against Iran (1980-88), but Iran and Saudi Arabia together supported Kuwait against Iraq (1990-91). Moreover, both countries sent troops to support Bosnia-Herzegovina (1992-95) under the orders of NATO against Yugoslavia.

This episode is often ignored. The Islamic Republic had sent Revolutionary Guards to support the Bosnian Muslims. The Lebanese Shiite resistance to Israel thought it should follow its example, and Hezbollah therefore also sent fighters into a conflict that had no relation to its raison d’être.

Saudi Arabia, which was protecting the Muslim Brotherhood at the time, sent Osama bin Laden’s Arab Legion to support the president and former Nazi Alija Izetbegović.

Bin Laden became his military advisor, along with his political advisor, the American Richard Perle, and his media advisor, the French Bernard-Henri Lévy.

In retrospect, this amalgam seems unnatural, but at the time, this alliance was not as stupid as it seems today. The United States had gathered all its forces against the Yugoslavia of pro-Russian Slobodan Milošević.

The rivalry between Sunni Saudi Arabia and Shiite Iran developed rapidly in the early 2000s around the Yemeni conflict, with Iran supporting the Zaidists grouped in the Houthi party. The Zaidists are Shiites, but of a very particular form, very much influenced by Indian culture.

For many years, the Saudis ran Yemen (North and South) along tribal lines. While the United States was negotiating the nuclear deal and its Secret Protocol with Iran during 2013-15, Israel was negotiating just as secretly with Saudi Arabia.

The two countries agreed to exploit the oil in Yemen and Ogaden (Horn of Africa) together.) [2]. To honor this agreement, Saudi Arabia went to war in Yemen, supported officially by the United Arab Emirates and unofficially by Israel, which used tactical nuclear bombs.

A Saudi-Iran alliance: Currently (2021-22) the United States and Iran are negotiating a new 5+1 agreement, while Israel and Saudi Arabia are moving toward formalizing diplomatic relations. At the same time, Iran and Saudi Arabia are discussing at the level of the heads of their secret services and diplomats.

They are trying to re-establish their alliance of the early 1990s in Bosnia-Herzegovina. They are on the verge of achieving this, which will unblock the other two negotiations.

Iran has already announced that it is reopening its office at the Organization of Islamic Cooperation (OIC) in Jeddah. The two countries could seal their alliance around political Islam. Especially since the OIC is the only intergovernmental religious organization.

Let us emphasize this point: no other religion has given rise to an intergovernmental organization. This is unique to Islam, whose founder, Muhammad, was both a spiritual leader and a political and military leader.

If this alliance takes shape, it will come into conflict not with secularists in general, but with Muslim secularists who distinguish Mohammedan religion from politics.

In the first place with the United Arab Emirates, Syria and Egypt. At the same time, this alliance will move closer to the other supporters of political Islam, Qatar and Turkey. It will be a complete reversal of the Middle East chessboard.

Already, we can observe the concern of some actors. For example, Sayyed Hassan Nasrallah, the Secretary General of the Lebanese Hezbollah, is multiplying his verbal attacks against Saudi crimes in Yemen, but not against his Emirati ally.

Yet Nasrallah defends a secular vision of Islam as the source of his commitment. He has included fighters of other religions in his resistance network, which would be impossible if he defended political Islam.

Or the Yemeni Houthis bombed the United Arab Emirates using drones. These drones flew 1,200 kilometers in more than 4 hours under the watchful eye of American and French radars and satellites. The Emirates were hit. Washington and Paris condemned the attack, but did nothing to warn the Emirates when they could.

Clearly the silence of the West was a warning to Abu Dhabi, an incentive to abandon its policy of religious tolerance and embrace political Islam. The Emiratis have few illusions about their Anglo-Saxon allies, who have never stopped playing on religious conflicts to extend their domination, but they were stunned to see the French following suit. The Emirates had appealed to President Jacques Chirac in 1995 because they were counting on a secular power to ensure their security.

The Emirates carried out a retaliatory raid in Yemen, but the Houthis are now threatening to attack the Bourj Khalifa Tower (a building over 800 metres high) in Dubai and economic interests in Abu Dhabi.

The United States will change its position in Yemen. For the moment, it is advocating a political settlement of the conflict. At the beginning of Biden’s term, it removed the Houthis from its list of terrorists, arguing that this would help NGOs distribute humanitarian aid. They just did not intervene in the Houthi bombing of the Emirates. Tomorrow they will divide Yemen between Wahabi (Saudi Arabia) and Zaidist (Houthis).

This Western reorganization of the Middle East directly contradicts the traditional Russian vision, which is based on the cultural identity of states and not only on their religion.

Moscow has an ambiguous attitude towards Iran. On the one hand, it integrates it into its defence system, on the other, it leaves it alone to confront Israel. Thus, President Ebrahim Raissi has just been received by President Vladimir Putin and the Duma on January 19.

A Saudi-Iran alliance: Anticipating the lifting of the US embargo, he managed to sign important agreements for technical assistance in the exploitation of his hydrocarbons. It has celebrated the joint victory in Syria and its army is participating in the Russian-Chinese naval manoeuvres in the Indian Ocean (“Maritime Security Belt 2022”).

But at the same time, Russian forces are letting the Israelis strike Iranian bases in Syria as they please. In reality, Iran could benefit from a US-Russian confrontation by joining the Russian-Chinese axis, it could become the missing link in the silk roads between India and Russia. It would be integrated into its banking system (the SPFS and no longer SWIFT) and could once again become a commercial power. In the meantime, Tehran is playing both sides of the fence.

The United States and Russia agreed several months ago on what the Middle East should be. It was more a question of defining zones of influence.

Thus, we have just learned that the Egyptian gas that should soon be delivered to Lebanon is in fact of Israeli origin. However, this information had been concealed by all the actors involved because today Israel is still at war with Lebanon and Syria. Moreover, the Arab pipeline passes through Jordan and Syria.

Not only Russia, but also the United States had encouraged this deal. However, US law forbids any trade with Syria on pain of the wrath of hell.

The Saudi-Iranian alliance would allow the US and the UK to expand the jihadist system [3], for the moment exclusively Sunni. We would then see fanatics from all sides unite against the secularists; a division that the British piloted during their imperial period and which had proved its worth.

[1] “Shock Wave Generator for Iran’sNuclear Weapons Program:More than a Feasibility Study” By David Albright and Olli Heinonen, Fondation for the Defense of Democracies, May 7, 2019.