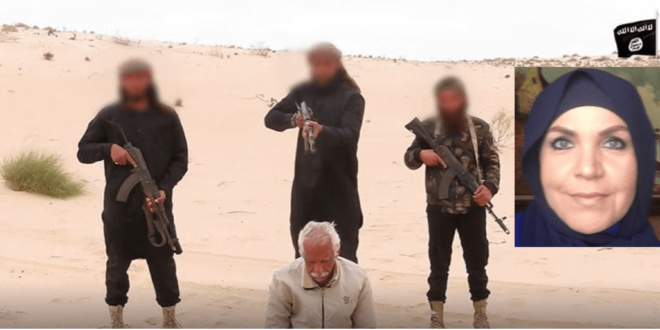 Herland Report: Islamist demonization of Middle East Christians: The recent execution of a Christian man by Muslim terrorists in Sinai showcased a little known but interesting fact: the reason so many “radical” Muslims target innocent “infidels” is often based on projection, a word defined as “the attribution of one’s own ideas, feelings, or attitudes to other people.”

One academic article/book chapter elaborates: “Projection allows the killer to project his (unacceptable) desire to kill (torture, rape, steal, dominate, etc.) onto some target group or person. This demonizes his target, making it even more acceptable to kill.”

Thus, in the April 17, 2021 video of the execution of Nabil H. Salama, a 62-year-old Christian man, the Islamic State narrator said that he was guilty of and being killed for building a church in Sinai that was somehow engaged in nefarious activities meant to subvert the Islamic order—precisely what many mosques do in and to the West, writes Raymond Ibrahim, author and Middle East and Islam specialist.  His books include Sword and Scimitar, Crucified Again: Exposing Islam’s New War on Christians, and The Al Qaeda Reader.

Similarly, after the Islamic State slaughtered 21 mostly Egyptian Christians on the shores of Libya in 2015, it made a video portraying its actions as “revenge” against the Coptic Church, which ISIS and other “radicals” regularly accuse of kidnapping, torturing, and forcing Muslim women to convert to Christianity—all things Muslims regularly do to Christians in Egypt.

Apparently the killing of nearly 60 Christians in a Baghdad church a few years earlier—which the jihadis then also portrayed as revenge against the Coptic Church’s forced conversion of Muslim women—was not enough.

Islamist demonization of Middle East Christians: When a Muslim cleric said that “whenever they [U.S.] invade a Muslim country, they strike on a Sunday. Always,” he too was projecting.  Muslim mob uprisings against Christians and their churches, in and out of Egypt, are almost always on Fridays—and naturally so: for that is the one day of the week when Muslims congregate in mosques for prayers, only to hear sermons that rile them up against infidels.

But perhaps the best example is Ayat Oraby, a Muslim woman activist popular on social media.  In a 2016 video (which appeared around the same time that one authority said Egyptian Christians were suffering attacks “every two or three days”), she sought to foment as much hostility for them as possible.

After calling the Coptic Church a “bunch of gangsters” and a “total mafia” that “rules [Egypt] behind the curtains,” she accused it of “stockpiling weapons in churches” and “striving to create a Coptic statelet” in an effort to continue waging “a war against Islam.”

Meanwhile, back in the real world—which consists of some 200 nations—Egypt is the 16th  worst nation for Christians to live in; there they experience “very high persecution.”  The abduction of Christian women and children and their forced conversion to Islam is par for the course; entire Christian villages and churches are regularly set aflame on the rumor that a Christian somewhere “blasphemed” against Muhammad on social media, or that a Christian man is dating a Muslim woman.

But many Muslims, such as this Ayat Oraby, ever seeing themselves as victims, are blind to such facts; their notions of reality are informed by Islam.  And if Islam calls for constant hostility against the “other,” who must be subjugated or subverted one way or the other, that must mean the “other” is constantly working to subjugate and subvert Muslims.

Oraby’s accusation that Egypt’s Christians control events “behind the curtains” is as ironic as it is old.  In 2010, prominent Egyptian cleric Khalid al-Jundi complained that in Egypt “Muslims have fewer rights than Christians, and even do not have the right to worship like Christians.” In reality and as is well known, Christian churches face immense restrictions; just talk of building one sets off mass riots and attacks on Christians.

Islamist demonization of Middle East Christians: Moreover, in a country where Islam reigns supreme; where Sharia (which mandates the subjugation of non-Muslims, a la Koranic verse 9:29) is part of the Constitution; where every segment of the Muslim population—from terrorists, to mobs, to the authorities themselves—harass Christian minorities at various levels; where Christians have been conditioned over centuries of persecution to be grateful with just being left alone—is it reasonable to believe that these selfsame, down-trodden “infidels,” who make up only ten percent of the population, are planning a violent takeover of Egypt?

Oraby’s claims that Egypt’s Christians are “stockpiling weapons in churches” and “striving to create a Coptic statelet” to continue waging “a war against Islam” is yet another tired charge.

Muhammad Salim al-Awwa, former secretary-general of the International Union for Muslim Scholars, once appeared on Al-Jazeera  and, in a wild tirade, accused the Copts of “stocking arms and ammunitions in their churches and monasteries”—imported from Israel no less, which he called “the heart of the Coptic Cause”—and “preparing to wage war against Muslims.” He warned that if nothing is done, the “country will burn,” inciting Muslims to “counteract the strength of the [Coptic] Church.”

In reality, all that ever burns are Coptic churches at the hands of Muslim mobs and terrorists—as when nearly 70 churches were attacked and many destroyed following the ouster of the Muslim Brotherhood’s Muhammad Morsi in 2013.  Moreover, it is Muslims who smuggle and stockpile weapons, including in mosques, in order to fuel their separatist jihads to secede from “infidel” powers.

In short, and as activist Mounir Bishai once put it:

Suddenly we [Coptic Christians] have shifted from complaints to self-defense, from demanding [our] rights to [trying to] convince the public that we are not depriving others of their rights… now we are being accused of amassing weapons… How have we suddenly turned from persecuted into persecutors, from the weak [party] into the strong and tyrannical [one], from the attacked [party] into the infamous attackers, and from the poor [party] into the rich exploiters? How did these lies become widespread, without us gaining any ground or improving our situation one whit?

Even in the field of theology, Muslims are apt to project Islam’s notions of jihad and “martyrdom,” fighting to the death for Islam, onto Christian theology.  In the midst of the accusation that the Copts are stockpiling weapons to wage war on Muslims, the Al Azhar Scholars Front, which consists of Al Azhar alumni, once declared:

Christianity…is constantly defining its overt and covert policy of eliminating all its rivals or degrading [the followers of other religions] and depriving them of every reason to live so that they will be forced to convert to Christianity.

In fact, this is precisely what Islam does: “eliminate all its rivals” through jihad; or, through the institution of dhimmitude, “degrade [the followers of other religions] and deprive them of every reason to live so that they will be forced to convert to” Islam.

Of course, the notion that a martyr is someone who wages and dies in jihad, or “holy war,” is intrinsic to Islam (e.g., Koran 9:111). Even the authoritative Hans Wehr Arabic-English  Dictionary translates shahid (“martyr”) as “one killed in battle with infidels.”

In closing, this lengthy excursion into Islamic projections offers another, equally important suggestion: if civilizational projection so pervades the world of Islam, could that also be why the people of the West—most of whom either profess Christianity or are at least influenced by its ethics and mores—cannot accept the realities of Islam?

Because they too project the ideals of their religious heritage—one that preaches love, tolerance, and forgiveness for enemies—onto Muslims and Islam, and therefore insists on seeing them in a positive light?

Islamist demonization of Middle East Christians: Also check out these topics at CNN or FOX News. Other sources may be New York Times, USA Today, the Washington Post or from the British angle, BBC, The Guardian, The Telegraph or Financial Times.

Raymond Ibrahim is an author and Middle East and Islam specialist.  His books include Sword and Scimitar, Crucified Again: Exposing Islam’s New War on Christians, and The Al Qaeda Reader. Ibrahim’s writings have appeared in the New York Times, CNN, LA Times, Fox News, Financial Times, Jerusalem Post, New York Times, United Press International, USA Today, Washington Post, Washington Times and others. He has been translated into dozens of languages. Ibrahim is a Shillman Fellow at the David Horowitz Freedom Center, a Judith Rosen Friedman Fellow at the Middle East Forum, and a Distinguished Senior Fellow at the Gatestone Institute.

Previous Only 29 % trust US media: New poll show US ranks last in media trust
Next Dmitry Orlov: The United States is walking along the path of the Soviet Union: Corruption, delusional elites