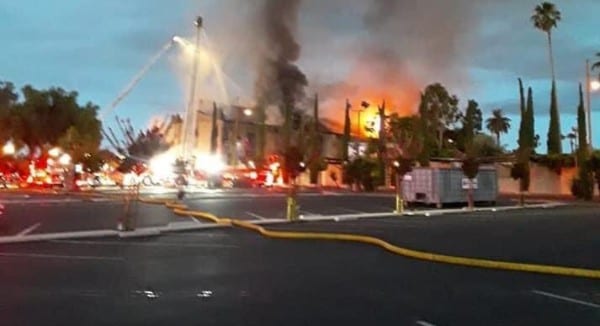 Imitating Islam in Persecuting Christians: The Woke War on the Christian Cross

When it comes to Islam’s views on Christianity, however — that it is an inferior faith to be subjugated and discriminated against (Koran 9:29) — the Left appears to be in agreement, writes best selling author and Islamic scholar, Raymond Ibrahim.

For example, a 61-year-old Christian woman who escaped to Britain from her Nigerian homeland — where a genocide against Christians is currently underway — experienced something similar in her adopted nation. Mary Onuoha, formerly a nurse at England’s Croydon University Hospital since 2002, was over the years repeatedly harassed by management and finally “bullied” out of her job for refusing to remove her small cross necklace, which she has worn for 40 years.  As Mary explained in an interview:

This has always been an attack on my faith. My cross has been with me for 40 years. It is part of me, and my faith, and it has never caused anyone any harm… At this hospital there are members of staff who go to a mosque four times a day and no one says anything to them. Hindus wear red bracelets on their wrists and female Muslims wear hijabs in theatre. Yet my small cross around my neck was deemed so dangerous that I was no longer allowed to do my job.

Her bosses eventually claimed that her cross necklace “harbored bacteria… even though many colleagues were allowed to sport other items expressing their religious beliefs, be they turbans, hijabs or bracelets.” The question she often responded with, and which her superiors never answered, was “why I should hide my faith while others were allowed to show their own.”

Imitating Islam in Persecuting Christians: The worst incident occurred in November 2016, when a manager actually called her away during surgery to berate her about her cross: “I said ‘I cannot leave the patient,’ but the manager insisted.  I was so embarrassed. Theatre [operation room] is a pressured environment, and I was astonished that senior staff were prepared to potentially endanger a patient’s life in order to intimidate me to remove it [her cross].”

In the end, because “she refused to take it off, Mary was moved to clerical duties and became subject to what she describes as a sustained campaign of bullying that left her unable to work.”  She took her case to court and only recently, according to a January 8 report, won.  Ruling in her favor, the judge found that management had forced Mary to work in a “humiliating, hostile and threatening environment” and that when Mary complained, their response had only been “offensive and intimidating.”

Imitating Islam in Persecuting Christians: And all because she wore a small cross necklace.  As Andrea Williams, who represented Mary in her lawsuit, explained:

From the beginning this case has been about one or two members of staff being offended by the cross — the worldwide, recognised and cherished symbol of the Christian faith. It is upsetting that an experienced nurse, during a pandemic, has been forced to choose between her faith and the profession she loves. Why do some NHS [National Health Service] employers feel that the cross is less worthy of protection or display than other religious attire?

Mary’s “victory has, however,” continues the report, “been achieved at a high price. Many Christians in the NHS and other workplaces have had to hide their crosses and Mary had to persevere through two years of incessant harassment by her managers.”  Nor is this phenomenon limited to Britain’s NHS.  According to a 2013 report,

A British Airways check-in worker’s right to express her religion was unfairly restricted when she was prevented from wearing a cross at work, the European court of human rights (ECHR) has ruled.  In a landmark judgment defining the limits of religious freedom, Nadia Eweida, 60, a practising Coptic Christian, was awarded €2,000 (£1,600) in compensation by the court in Strasbourg after it ruled against the United Kingdom.

In both of the above cases, the cross-wearing women came from nations — Nigeria and Egypt — where Muslims persecute and discriminate against Christians.  There, they were willing to face the abuse for wearing their crosses, these tiny emblems of hope.  Accordingly, and as I know from talking to such people, they are often shocked beyond belief to discover that the Western nations they fled to — and which they mistakenly assumed were Christian nations — share in Islam’s well-documented aversion for the Christian cross.

Nor are Christian immigrants the only ones to face such discrimination in Britain.  So do natives — and they, perhaps unsurprisingly, rarely get vindicated.  For example, the same report discussing Coptic woman Nadia Eweida’s victory adds:

But three other Christian applicants – Lilian Ladele, a local authority registrar who also lives in London, Shirley Chaplin, 57, a nurse from Exeter, and Gary McFarlane, 51, a Bristol marriage counsellor – who also claimed they had suffered religious discrimination lost their appeals.

The three aforementioned other cases also concerned Christians who were disciplined or fired from their jobs for religious reasons.  Shirley Chaplin’s case was near identical to Mary Onuoha’s case: she too was a nurse at an NHS hospital who was disciplined and demoted for refusing to remove her cross necklace: “In her case, however,” continues the report, “the Strasbourg judges considered the fact that hospital authorities had asked her to remove it for the protection of health and safety and to prevent infections spreading on a ward ‘was inherently more important.’ Hospital managers, the judges agreed, ‘were well placed to make decisions about clinical safety.’”

“It seems ridiculous to me,” was Shirley’s response:

I wore it [the crucifix] on my confirmation when I was 16, I’ve been a nurse since 1978. I’ve worn it without incident, I’ve nursed a very wide range of patients, I’ve been bitten, I’ve been scratched, I’ve had computers thrown at me, but no-one has ever, ever grabbed my crucifix. To say it’s a health and safety risk, I really don’t agree with that at all.

Imitating Islam in Persecuting Christians: The same sort of thing is happening right here in the United States of America — and at the highest levels.  Most recently, according to a December 23, 2021 report,

A Texas-based religious business that makes specialty dog tags [identifier necklaces for soldiers] with Bible verses and Christian imagery has filed a lawsuit against the United States Department of Defense over its decision to prohibit the company from selling religious tags with U.S. armed forces trademarks…

For over 20 years, Shields of Strength had been allowed to include the military trademarks alongside Bible verse quotes and Christian imagery, such as a cross. The business boasts of having sold or donated around 4 million dog tags.

First Liberty Institute, which represents Shields of Strength, said the military’s policy is unconstitutional, “arbitrary and capricious,” adding, “It’s a cruel insult to our service members to deny them a source of inspiration, hope, and encouragement simply because it contains a religious message.  DOD officials caved to the empty threats of those who make their living by being offended. There’s no legal reason for the military to discriminate against Shields of Strength.”

In conclusion, if Islam and the Left are dissimilar in many ways, they certainly share the same hostility for one particular thing — to the point that some might argue that is the whole impetus behind their being, contradistinction, opposition to that one thing: Christianity, especially visible and proud reminders of it, such as the cross.

Islam, beginning with its prophet, who “had such a repugnance to the form of the cross that he broke everything brought into his house with its figure upon it,” has been responsible for destroying countless crosses, past and present.  Islam, however, is at least honest and open about its hatred.

As for the so-called “Left,” perhaps it is high time to take the sage advice first uttered by the one behind the cross: “You will know them by their fruits.”

Raymond Ibrahim is an author and Middle East and Islam specialist.  Order his latest book Defenders of the West here! His books include Sword and Scimitar, Crucified Again: Exposing Islam’s New War on Christians, and The Al Qaeda Reader. Ibrahim’s writings have appeared in the New York Times, CNN, LA Times, Fox News, Financial Times, Jerusalem Post, New York Times, United Press International, USA Today, Washington Post, Washington Times and others. He has been translated into dozens of languages. Ibrahim is a Shillman Fellow at the David Horowitz Freedom Center, a Judith Rosen Friedman Fellow at the Middle East Forum, and a Distinguished Senior Fellow at the Gatestone Institute.
Previous We have had a Narrow Escape from Full Blown Tyranny
Next The Covid vaccine failure: U-turn in the pandemic narrative