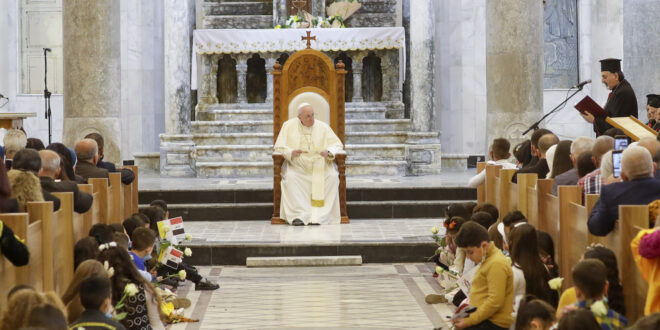 Pope Francis listens to Syriac Catholic Patriarch Ignatius Joseph III Yonan, right, delivering his welcome speech during a meeting with the Qaraqosh community at the Church of the Immaculate Conception, in Qaraqosh, Iraq, Sunday, March 7, 2021, The small Christian community returned to Qaraqosh after the war where they rebuilt their church that was used as a firing range by IS. (AP Photo/Andrew Medichini)

Pope Francis says service to others frees us from existential grayness

Herland Report:  Pope Francis says service to others frees us from existential grayness: In his homily during Mass for Saturday’s trip to Molise, Pope Francis explained that the Church is a people that both serves God and lives in the freedom that he gives from oppression, Catholic News Agency reports.

“This is the freedom that, by the grace of God, we experience in the Christian community when we put ourselves at each others’ service, without jealousy, without taking sides, without chatter… Serving one another. Serving!” the Pope explained in his homily.

Taking place in the Campobasso’s Romagnoli Stadium, the Pope’s Mass was the second event in his one-day trip to Italy’s southern region of Molise.

Pope Francis says service to others frees us from existential grayness: Overseeing the Archdiocese of Campobasso-Boiano is Archbishop Giancarlo Maria Bregantini, who was appointed by the Pope to write the meditations for this year’s Good Friday Via Crucis at the Colosseum. He is also known for his commitment in fighting against organized crime.

In his homily Pope Francis reflected on how the day’s first reading illustrates the characteristics of divine wisdom, stating that it “liberates from evil and oppression those who place themselves at the service of the Lord.”

Pope Francis says service to others frees us from existential grayness: He explained that God is never neutral but rather is always “close to people who are fragile, discriminated against and oppressed, who abandon themselves in trust to him,” adding that the experience of Jacob and Joseph in the Old Testament “reveals two essential aspects of the life of the Church.”

Observing how the Church is first of all a people who serves God, the pontiff noted that although this is done in various ways, the most important is prayer, of which Mary is an iconic example through her haste to help Elizabeth when she was in need.

Noting how “the witness of charity is the main path of evangelization,” the Bishop of Rome encouraged the priests, religious and laity of Molise to “persevere on this path, serving God in the service of others and spreading everywhere the culture of solidarity.”

“There is much need for this commitment in the face of situations of material and spiritual precariousness, especially in the face of unemployment, a plague that requires every effort and much courage on everyone’s part,” he said.

In order to give this effort Pope Francis stated that it is first necessary to “place the dignity of the human person at the center of every prospect and every action.”

Going on, the Roman Pontiff explained that because the Church serves the Lord it is also a people that “experiences his freedom and lives in this freedom that he gives,” adding that “the Lord always gives true freedom.”

“First of all the freedom from sin, from selfishness in all its forms: the freedom to give of oneself and to do so with joy” as well as to “to adore God, to serve God and to serve him even in our brothers and sisters,” he went on.

Observing how there is often “no shortage of negative attitudes that make people self-referential, more concerned with defending themselves than with giving of themselves” in our own communities, the Pope assured that Christ frees us from all of this.

“For this reason we disciples of the Lord, though still always weak and sinners – we are all so – still weak and sinners, we are called to live our faith with joy and courage.”

We are also called to live our faith in “communion with God and with our brothers, adoration of God,” he went on, “and to face with strength the labors and trials of life.”

The level of censorship in social media and search engines is all-time high. Do like thousands of others, subscribe to The Herland Report newsletter here! Led by Scandinavian bestselling author, Hanne Nabintu Herland, The Herland Report news and opinion website provides independent analysis from leading Western intellectuals and ground breaking YouTube interviews, cutting through the mainstream media rhetoric. It is a great place to watch interviews and read the articles of leading intellectuals, thought leaders, authors and activists from across the political spectrum. The Herland Report believes in freedom of speech and its editorial policy resides above the traditional Left vs Right paradigm which we believe has lost its relevance and ability to describe the current driving forces in Western politics.
Previous TV show: Herland on The Media War and Western Propaganda
Next Typisk norsk å være ond?