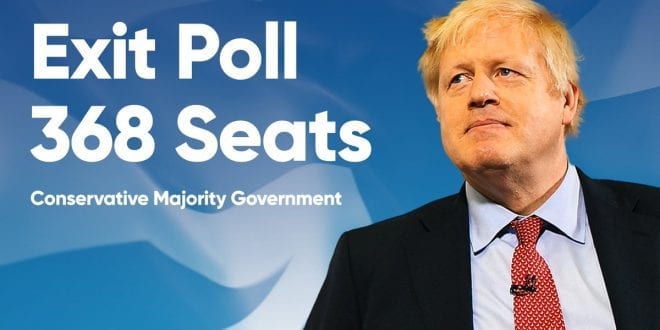 Herland Report:  The historic UK election with Boris Johnson Churchillian moment said to set the standard for many years to come, gave the Conservatives a massive victory.

The British people voted Brexit years ago. This is the second time they vote on the same matter. We wrote: The power struggle between the EU globalists and the British people over who will rule Britain comes to an end in the December 12 election. Let the British rule Great Britain! We support Boris Johnson.

Boris Johnson tweeted: “Thank you to everyone across our great country who voted, who volunteered, who stood as candidates. We live in the greatest democracy in the world.”

Both the mainstream media and the Labour Party has massively pushed against Brexit – and thereby against its own people who already once before voted for Brexit. The people has spoken, again.

Media surveys for the UK show that around 70 % of the British people do not trust the media. It seems few trust the Labour Party too, as analysts say the downward spiral for Labour may last for many years.

That’s what happens when you leave your working class voter base and become best friends with the EU globalist billionaires instead. Workers in Britain voted Brexit, Labour chose the EU allegiance over their own voter base.

It seems that the Labour Party lost the favour of the working class, who voted Conservative.

The pound rose more than 2 per cent, its biggest rise since 2017 after the exit poll projected a strong victory for Boris Johnson’s Conservative party, reports Financial Times.

According to analysts, the strong Conservative outcome will give Boris Johnson a very strong standing, not only regarding the Brexit process but also in negotiating trade agreements with the EU. In Brussels, the mood was gloomy as the Tories soared.

The paradox of how the Labour Party could go from being the workers’ choice to fending for the billionaires at Davos, remains to be thoroughly examined.

As the 1 % richest in the world own the media, and with the globalist intention of further amassing wealth into the hands of the few, the internationalist strategy disregards national borders and national sovereignty.

Their transnational business model is dependent on free access, not paying taxes, no redistribution of wealth and a borderless society.

Socialism, under the disguise of protecting the worker, provides the best political tool to gain control over a population with its own elite.

For example, The Guardian bias against the British people’s choice. The people already voted once before “For Brexit”, which British newspapers simply cannot respect.

The mainstream media bias reflects its globalist owners’ wish: For Britain to remain under the umbrella of the 1 % internationalist model.

The Conservatives have all along stated that they respect the will of the people. They will get Brexit done and take back to power over Great Britain to the British. We think that is a good idea. Let the British rule Great Britain for the years to come.