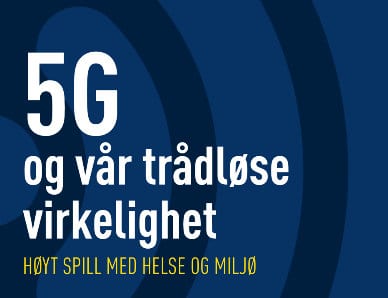 Herland Report: A ground breaking book on 5G with proof of health hazard has been published in Norway, 5G og vår trådløse virkelighet. This book represents a break through event in Scandinavia.

It offers interested readers of all professions a thorough walk through of the medical, as well as the juridical proofs that 5G is even more unsafe than earlier generation wireless communications – 4G, 3G and 2G.

Einar Flydal is a political scientist and a leading voice on EMF research, health and the environment, and a central activist in the fight against «smart» meters. Else Nordhagen (PhD in ICT) is a former researcher/developer at Telenor, a serial business founder, and an experienced university lecturer.

The published material also demonstrates in detail how we, the laymen as well as politicians and public authorities, are fooled by more often less well informed scientists, consultants and marketeers, serving corporate interests.

The book takes the reader through technical explanations, a host of medical evidence from scientific research, and documentation that fully demonstrates fraudulent action and unpermissible carelessness.

The format and language is well understandable and useful both to lawyers, health professionals, biologists, physicists, investigative journalists, environmentalists/activists and other interested parties.

It can – and should – form the basis for legal measures as well as health and environmental policy advances.

The radiation protection policies in Norway and other Nordic countries follow WHO recommendations. They are blueprints derived from the private German foundation The International Commission for Non-Ionizing Radiation Protection (ICNIRP), set up by industry, financed by industry, and actively promoting max lax regulatory regimes.

So doing, it is even more than IEEE and FCC recommendations. The content of the book is presented under four main perspectives:

The editors are responsible for larger parts of the book, and for the many translations of scientific and other materials presented.

Einar Flydal (master of political science and master of telecom strategy) is retired from positions as researcher and senior strategy adviser at Telenor corporate headquarters, and from a position as adjunct assistant professor at the politechnical university NTNU in Trondheim, Norway.

Einar Flydal is a political scientist and a leading voice on EMF research, health and the environment, and a central activist in the fight against «smart» meters. Else Nordhagen (PhD in ICT) is a former researcher/developer at Telenor, a serial business founder, and an experienced university lecturer.

The papers re-published in Norwegian in the book, are by Martin L. Pall, by SCENIHR (the Scientific Committee on Emerging and Newly Identified Health Risks under the EU Commission), and by David Carpenter, Cindy Sage and Lennart Hardell. A Danish juridical study (also awailable in English) by the attorny-at-law Christian F. Jensen is also included.

Also, Bård-Rune Martinsen, Health, Environment and Safety Consultant, presents his take on the lacking foundation for the claims often issued by the Norwegian Radiation Authority, that current exposure levels are safe.