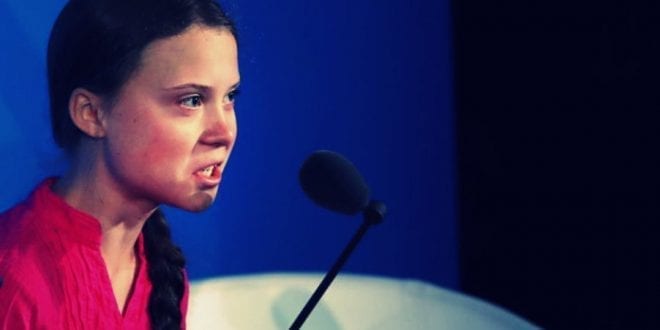 Herland Report: To use children as “bait” in creating sympathy for various causes, is an increasingly used method in the Western media. Latest, Swedish Greta Thunberg, a 16 year old with zero understanding of how she is publicly abused and lured into the role as “media puppet for climate change”.

If we get the highly politicized Norwegian Nobel Peace Prize committee right, she will probably get the Peace Prize this year. The world truly has gone mad.

Alfred Nobel would have turned in his grave at the current level of stupidity of the Nobel Committee, writes Hanne Herland, founder of The Herland Report.

Thunberg has a known past with mental issues, comes from a troubled background and is now a child pampered by power structures in society to travel the world with mainstream media covering her every step.

As the world needs heros, someone has decided that Greta Thunberg is what the world needs. Let us guess that it will remain that way for as long as Thunberg and her parents allow the abuse of this girl to continue.

Once it is over, and she stops being useful to whoever is paying for all of this, we will never hear of her again.

The little girl initially suddenly found world fame (sic) by organizing a school strike in her home town in Sweden, demanding climate change to be taken seriously by world leaders.

After travelling the world – and obviously dropping out of school, one wonders what benefit that will bring her later in life – she spoke at the UN, the crowd cheering.

The “idiot” is the president and the hero is a 16 year old? This truly is the end of the West.

Thanks to the formal diagnosis of Asperger’s syndrome coupled with high-functioning autism and obsessive compulsive disorder, the now-16-year-old Swede has become quite literally the poster child for the generation that will have to deal with the destruction of our planet.

One seriously wonders if the world has gone mad. Tunberg, a child already diagnosed with mental disorder history now used by big industry “climate change” and given front row mainstream media? The child is 16!

This child is allowed to give hysterical speeches about “the world at mass extinction, entire ecosystems are collapsing. We are in the beginning of a mass extinction and all you can talk about is money and fairytales of eternal economic growth.”

The child is allowed to theatrically shouting “how dare you” at the grown ups in the UN assembly. It is simply a display of lack of bad manners, for one. Second, a question of child abuse, allowing such an disarrayed child to even behave in such a way publicly.

Let me predict that nobody will care what will happen to this child in later years, when Thunberg has outdone her use to the mainstream powers.

Is this what we have become, using a child and her destiny to achieve “sympathy” for some cause?

To cite Daily Beast: “When Swedish climate change activist Greta Thunberg was 11 years old, her body had started to shut down due to severe self-starvation tied to debilitating depression. She spoke to almost no one but her immediate family.

She was afraid of crowds. She was lost in her own world, and the world very nearly lost her.

Since she began not even a year ago, the protests have been held in 100 cities by teen activists. Her intensity has become her secret weapon and her now-famous speeches at the World Economic Forum’s annual meeting in Davos, in front of the British Parliament and at the United Nations’ COP24 Climate Talks, landed her a nomination for the Nobel Peace Prize this year.

But thanks to the formal diagnosis of Asperger’s syndrome coupled with high-functioning autism and obsessive compulsive disorder, the now-16-year-old Swede has become quite literally the poster child for the generation that will have to deal with the destruction of our planet.

Once she started receiving multifaceted treatment, Thunberg was able to channel her anxiety into something we should all be concerned about: the health of the planet and the science behind apocalyptic warnings of its demise.”

It is quite the testament to the cynicial abuse of children that is now mainstream legitimate in the West. The point is to create sympathy for whichever cause, in this case “climate change”.

And apparently Donald Trump is the enemy, although it is China and the Far East who are the worst with climate – coal and so on. Somehow still, Trump seems to be the main enemy for poor children such as Thunberg. Whoever is responsible for the abuse of this child, let him stop doing this to this poor, Swedish girl. Let her go home, and finish her schooling and get a bright future in Sweden.

By the way, when the parents of the Syrian Boy, Omran Daqneesh, for whom the CNN archor so famously cried – the boy depicted in the iconic orange ambulance – protested against the use of the face of their child, the mainstream media did not report it. Not a word. The boy’s face became iconic in Western media, created to symbolize the brutality of the Assad regime as Aleppo fell.

The parents were furious that their son was abused by rebel groups who tried to use his face in the international propaganda media campaigns against Assad, they said to Lebanese media channels.

We hope somebody cares for Greta Thunberg once the media is finished using her for their own agenda.

The Herland Report Scandinavian news site, TV channel on YouTube and Podcasts have millions of readers/viewers yearly. It is a great place to watch interviews and read the articles of leading intellectuals, thought leaders, authors and activists from across the political spectrum. The Herland Report believes in freedom of speech and its editorial policy resides above the traditional Left vs Right paradigm which we believe has lost its relevance and ability to describe the current driving forces in Western politics.
Previous Brexit stopped by Supreme Court, Paul C. Roberts
Next September 11, 2011: America, a Land Without Truth – Paul Craig Roberts