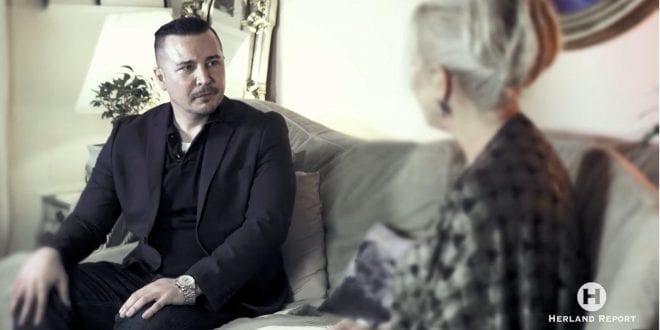 Herland Report: Why do the narratives become so “black and white” in wars, we asked Joaquin Flores, editor-in-chief of Fort Russ News and director for Center for Syncretic Studies in Belgrade.

Herland Report TV: “Truth is the first casualty of war, the narratives become polarized, just as it did in the Syria war,” says Joaquin Flores in this new TV program.

“To the extent that we’ve seen in the Western narrative that Assad is gassing his own people, murdering his own people, these are fictions. Was their repression? Were there imprisonments? Torture? Are there political prisoners? Yes, like in the United States there is.”

Joaquin Flores explains: “I am not saying the truth is somewhere in the middle because then that just simply creates the incentive for both sides to exaggerate further, to push the middle over to their side. We’ve seen that and that’s polarization.”

“Yet, when the accusations became ridiculous and unsustainable against the Syrian government, then the pro-Syrian forces, their international allies and the Syrian government itself began to project an alternate reality in the other direction: That there were not any major problems, that Assad had full support, that all the things that were being said about the government were lies. And they weren’t. There were some real problems in Syria.”

“For example, as The White Helmets came into the picture this seemed like a recent advent for many people, but it in fact has been growing slowly since the early 1970s.

So, there was in 1972 or 1973 Hafez al Assad began to move away from the Soviet model of direct state planning and all spheres of the economy, and kind of learned more from Khrushchev and the West to liberalize the economy.

He took on IMF debt, but also the British MI5 had been supporting and building up Islamists for a long time since the 40s and 50s.

As early as the 1970s, there was attempts by Hafez al-Assad to incorporate them in, to sort of buy them off to place any imam who is ostensibly a Sunni, even a radical Sunni cleric, even one who previously said anti-pan Arab nationalist things, and get him to be kind of neutral and bestow his blessings on the government.

In turn, the government of Hafez al-Assad would then bestow some legitimacy upon the Muslim Brotherhood.

Because they were of course under the rules of the IMF which had to introduce these human rights organizations.” “The Muslim Brotherhood had in the 20th century, in particular since the 1950s, influenced by the Egyptian scholar cult developed the concept of introducing radical Islamism with social programs.”

“This put them in competition with the secular Communist and social Left, or the pan-Arab nationalists who had kind of a somewhat of a band with the pro-Soviet sphere. So, the Muslim Brotherhood began taking up the language of the Western Left.”

“They built up parallell institutions within society. For example, the IMF would say Syria had to put budget cuts on education, so Assad’s father had to veto bills about education and health care and reduced the budget. Who filled the gap were these civil society organizations being financed by Gulf monarchs and the United States in a long game to create what are called dual power institutions.”

“Vladimir Lenin actually, the Bolshevik leader, was one of the first to write about the necessity in trying to overthrow a government ultimately that you have to create dual power organs within the society.”

“You have to start to take away the credibility of the government while the government still stands, by performing certain necessary government functions through the philanthropic sphere.”

“So, the White Helmets really evolved out of these civil society organizations that the West and Gulf state monarchs had been financing going back to the 70s.”

“Then, when Wolfowitz and Pearl and the neo-cons, and Bush II was president and made the war on Iraq and Afghanistan, they put the ultimatum to Gadhafi, to next in line, Bashar al-Assad, that you must introduce you must let some of the even crazier radical Salafis out of jail.”

“You must let them integrate into the NGOs that were already Muslim Brotherhood led NGOs that had been for a certain period moderated or co-opted by the state, but we’re festering slowly building these dual state functions in society.”

“So, what we saw erupt up finally eight years ago now, is the culmination of a process going back to decades and decades ago.”

Previous September 11, 2011: America, a Land Without Truth – Paul Craig Roberts
Next No sex Marriage? The end of sex – Maureen McGrath