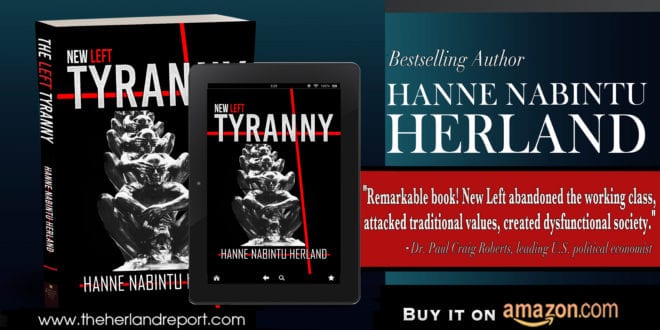 Herland Report: Important book about Gangster State Capitalism and Returning Feudalism: “Hanne Herland of the European Herland Report has a book published in which she argues that the ruling elite has resurrected feudalism by financializing the economy and offshoring middle class jobs.

The title is New Left Tyranny, but it is about gangster state capitalism,” writes the leading political economist, Dr. Paul Craig Roberts in this analysis of the book:

Free labor markets and emergent capitalism made productive by technological advancements created with time rising living standards and a free people determined to protect their independence by holding government accountable.

This system was eventually wrecked by banks that financialized the economy and diverted discretionary personal income to the payment of interests and fees to banks, and by global corporations that moved first world jobs to Asia, thus raising their profits at the expense of domestic consumer purchasing power and living standards.

The result was the concentration of income and wealth in the hands of a few multi-billionaires.

Years of attacks by left-wing intellectuals on Western principles and values, the re-writing of history to serve left-wing agendas, the dilution of national identity in diversity and multiculturalism, and the teaching of race and gender hatreds by Identity Politics has produced a disunited and dysfunctional society.”

Corporate investment in the US ceased as corporations used their profits to buy back their own stocks, thus raising share prices and maximizing executive bonuses and shareholders’ capital gains.

This selfish management of corporations brought economic growth to a halt.  The ladders of upward mobility were dismantled.”

Years of attacks by left-wing intellectuals on Western principles and values, the re-writing of history to serve left-wing agendas, the dilution of national identity in diversity and multiculturalism, and the teaching of race and gender hatreds by Identity Politics has produced a disunited and dysfunctional society.

In the US the Democrat Party has abandoned the working class it once championed, labeling blue collar workers “the Trump deplorables.”

Everywhere in the Western World Towers of Babel are being erected. The ethnic nationalities that constituted a country are becoming increasingly alienated from their country as it ceases to be theirs.

In France, Sweden, and Germany law favors immigrant-invaders over the ethnicities—French, Swedes, Germans—that gave the countries their names. Ethnic nationalities are also under attack from the European Union whose purpose is to replace European ethnicities with “Europeans” of no ethnicity.  Everywhere the bonds that held things together are being severed.

Tyranny can be the only outcome.

Democracy is touted, but everywhere in the Western World the traditional ethnicities feel powerless and unable to affect how they are governed. Dissent is censored by the ruling elites who have in place powerful means to control explanations and to implement agendas that the people do not support.

Capitalism, no longer productive, has turned to looting. Privatization is the method.  First it was third world countries that were looted. Then the weaker first world countries such as Greece, which lost its municipal water companies and ports.

Real estate speculators made a grab for the country’s protected islands. Now it is the public sectors of the First World countries that are being looted. Regulations that protect the environment are ignored or withdrawn so that private firms can plunder national forests and mine wildlife refuges. Valuable public assets are sold at prices below value to well-connected elites.

For example, the British post office was sold to a private company at a fraction of the value of the properties it owned. France sold off its public companies. New private firms are created, the revenues of which come entirely from public budgets.  The number of private businesses today whose only revenues come from some government’s budget is stunning.

The examples of politicians creating private businesses for politically-connected people by assigning the provision of various government services to private companies is endless.”

New book about Gangster State Capitalism and Returning Feudalism:  Dr. Roberts continues: “The state of Florida has contracted out to a private firm the issuance of new vehicle license tags. Will driver’s licenses be next? Soldiers no longer perform guard duty or KP.  The army is fed and guarded by private contractors.

The claim is always made that it is less costly and saves taxpayers money to rely on the private sector, but it always costs much more. Individuals working for private military contractors, for example, earn between $9,000 and $22,500 per month. If the person is working abroad, $104,100 of his earnings are tax free under the IRS foreign earned income inclusion. A soldier earns $1,468 a month.  A captain’s pay is $4,952.”

New book about Gangster State Capitalism and Returning Feudalism:  Dr. Roberts: “In the US traditional government functions are being turned over to newly created “private” companies that have no customers but the government.  Soon the US government will be merely a revenue collector that hands out money to private firms.