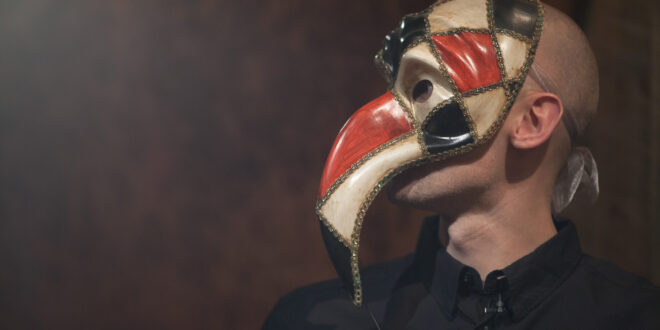 Herland Report: The Norwegian government’ reported squandering of public funds has become somewhat of a a Facebook phenomenon thanks to the Norwegian commentator who calls himself Sløseriombudsmannen – which means “The Squander Ombudsman”.

Wearing a Venetian mask, the man behind the social media account visits Cave of Apelles to discuss how artists are reportedly wasting taxpayers’ money through the sloppy attitudes of the rich, Norwegian bureaucracy.

Much of the attention around The Squander Ombudsman comes from his posts about conceptual art performances and their taxpayer funding.

– No One Is Trying to Stop Them

Sløseriombudsmannen – The Squander Ombudsman: The anonymous person behind the account stresses that he does not have “a plan” for The Norwegian Culture Council, other than to reduce public funding.

“I guess you can make an effort to say that The Council should be politically neutral, but they already say that they use it for their political agenda” and that no one is trying to stop them, he says in the interview.

Jan-Ove Tuv clarifies that people who oppose the massive funding of these art projects, are not attempting to hinder people to do what they want.

The Squander Ombudsman takes us back to the beginning in 2014, when a group of friends entertained each other by sharing examples of silly government spending, ultimately deciding to make the activity into a Facebook page. Eventually, the Ombudsman discovered that state squandering frequently occurred in the cultural field as well.

He posted a video of a performance by a female artist who had applied for money from The Culture Council, receiving roughly 300 000 dollars. It went viral.

“People were shocked that the government spent money on this. That someone got money to do this even in Norway, where we are quite used to large government spending,” says The Squander Ombudsman.

However, what had started as an entertainment project would soon spark the rage of the Norwegian Art community, in which many were furious that artists were being subjected to “mockery”.

The Squander Ombudsman had hit a nerve.

“I was so surprised about the intensity of the criticism, so that made me think a lot more about this. There is something that goes a little bit deeper than just 300 000 dollars wasted,” he says.

Sløseriombudsmannen – The Squander Ombudsman: The Ombudsman says that he has become a true object of hate within the Art community in Norway, although he clarifies that he has never attempted to target specific artists based on his personal taste, because, as he argues, he did not have any.

A connection that illustrates the Art community’s aversion towards his project is the boycott of the Norwegian artist Morten Tråvik following his collaborative project with the Ombudsman.

“Tråvik was funded to do a play in North Korea, and was accused of being a useful idiot for the North Korean regime. No one cared in the art community,” says the Ombudsman. But when Tråvik got involved with the Squander Ombudsman, the tone was quite different.

“It means that I’m one step above the North Korean dictator in the Norwegian art community. I find that hilarious,” he says and laughs.

Despite the hatred and criticism from the Art community, his followers support his coverage of state squandering. Recently, the social media account has also started to gain some institutional power.

“I notice that more and more politicians have started to follow the Facebook page. A couple of months ago, the Progress Party [Fremskrittspartiet] posted, in their alternative budget, that they wanted to cut around 40 million dollars from the fund that distributes money to the artists,” he says.

“Yes. So, that was quite a big deal. It was never an ambition to change the world, because that would be a horrible headwind. My hope was to have fun, and be a bit sarcastic and have fun in this wild spending spree,” the Ombudsman says.

Negotiating with the government, the Progress Party managed to cut the spending budget of The Culture Council by ten million norwegian kroner.

Arms Length Distance Is A Joke

But Tuv and the Ombudsman are not buying that argument. The former refers to how even accepted artists have criticized the nepotism involved in delegating culture funds.

The latter says that he read some documents from the National Soscialist government’s Department of Propaganda during the Second World War, and reveals that they promote the same clichés about the freedom of art and how art should not be inflicted by politics — what we call “arms length distance”.

As the reader might suspect, the National Socialists’ Department of Propaganda was nothing close to being politically neutral.

“It’s a joke, really, because if you put the right people in there, they are going to do what you intend them to anyway, says the Ombudsman.

He argues that his mission is the complete opposite of the Nazi attitude of letting the State decide between good and bad art.

– The state should not have a strong hand in this game, he says.

Previous Marxists demonize the Bible to hide how Great the West used to be
Next PARLER, The Big Tech silenced free speech platform is back in business, log in here