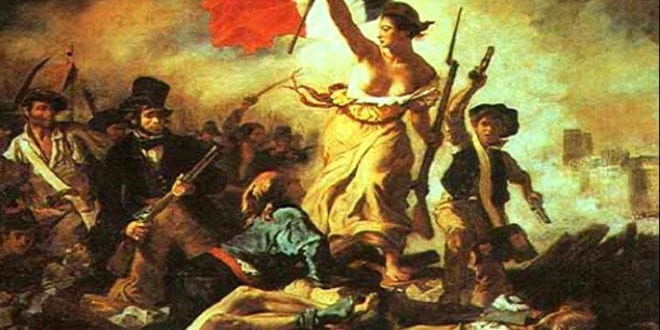 Herland Report: The French Revolution Tyranny:  The great rulers in history knew perfectly well how to control the mob.

Empires often ruthlessly pushed for conquest of the weak and revenues from the conquered, yet he who holds the moral high ground tends to win in the long run.

As the United States is engulfed in civil unrest, a divided people, Communist Antifa millennials and the Marxist Black Lives Matter, let us look at how mob rule often ends.

For example, the radical French Revolution brought massive anarchy to France in the late 1700s. Peace was not restored until Napoleon seized power and reinstated the rule of law.

When the mob has tyrannized the people long enough, a military dictatorship is normally introduced in order to get matters under control again. Napoleon was the man who saved the French mob from their own lynching spiral.

Ironically, the 1789 French Revolution is to this day depicted as a “glorious moment” in modern European history as “the people took power over the elite”. In reality, the revolution almost destroyed the French state and has only been glorified since by the rise of Marxism.

The Revolution of 1789 came only years before Karl Marx and Engels wrote the famous thesis “The Communist Manifesto.” Europe was in turmoil, and many wanted to break free from the traditional systems.
Before the Revolution, the French ruling classes did little to alleviate poverty and other challenges in a society experiencing corruption and internal unrest. They stood aside, occupied with amassing wealth into their own hands, not unlike today. The rich became richer, the poor were deprived of the little they had. And, as usual, political forces that desired change, took advantage of the situation.
RELATED POSTS:
Its wealthy kings failed to address painstaking issues that made life miserable for ordinary citizens. Injustice and discontentment among the people have in history tended to be the root cause of many a revolution. Yet, the idealization of brute revolutions has tended not to always lead to the wished for result.
The new radical French leaders “of the people” who first spoke so gloriously about “liberty, equality and fraternity” soon proved to be far more ruthless than their bourgeois predecessors.

A few years after the rebels had ousted the king’s court, they constructed a power-elite that became vastly more tyrannical than the aristocracy they had removed.

This enhanced a brutal tyranny of the mob that to this day reminds us of our own ruthless legacy of authoritarian intolerance draped in the disguise of liberty and freedom. We are often good speakers of “democracy and freedom,” but even better at waging wars.

Under the French revolutionary leader, Maximilien de Robespierre, guillotines were set up on almost every street corner in Paris.

Robespierre summarized his totalitarian logic, stating that there are only two types of people in France, the people and their enemies. Anyone who opposed the revolution was to be eliminated.

Priests and the well-educated were beheaded and killed by the thousands without trials or examining evidence; their bodies were thrown into the streets.

Nobody cared about the rule of law in the midst of this so-called glorious revolution. And it was profoundly anti-religious. Churches were locked up; priests demeaned and killed.

The French Revolution meant the end of religious freedom in France. A new tyranny had begun – a “democratic” tyranny.

The anarchy during the French Revolution and its early implementation of democracy – the rule of the people – gave criminals the opportunity to exercise all kinds of violence freely.

Its new consensus-oriented politicians were driven by a deep resentment, not only against religion but against all traditional values. In the “New France” no violation of the strict radical consensus was tolerated.

Conservative intellectuals, religious dissidents, kings, anyone of authority who did not submit to the new rulers, were ruthlessly killed. In “Demonic,” best-selling author Ann Coulter points out that the French Revolution was an uprising of a peer-pressure oriented nihilistic mob, further characterized by irrationality, violence and destructive social attitudes.

The French Revolution was essentially a disaster for France.

It resulted in total anarchy. There was no peace until Napoleon Bonaparte seized power and restored the rule of law. He ended up saving the French “government of the people” from their own merciless spiral of violence against the population.

It is quite remarkable – this is how modern Western democracy first was implemented in Europe, by brutal force and authoritarian, illiberal new elites.

It was Napoleon who brought back a functioning legal system, restored freedom of religion, the protection of minorities such as the Jews and reinstalled respect for the clergy.

The French church was not reinstated until Napoleon came to power.

He understood how vital this traditional force was for the upkeep of morality and order. He allegedly even forced his atheist marshals to attend church and pay their respects.

Napoleon was acutely aware of the dangers of hypocrisy within the church, having attended Catholic schools and seen much of the injustice within the institutionalized church systems, yet he still believed that religious values such as “love thy neighbor” were ideals that needed to be taught in society to uphold social order.

So, war and revolution may not always be the answer that brings more justice to the world.

Hanne Nabintu Herland is a historian of religions and bestselling author. She is the founder of The Herland Report Scandinavian news site, TV channel on YouTube and Podcasts which have millions of readers/viewers yearly. This is a great place to watch interviews with leading intellectuals, thought leaders from across the political spectrum. Herland’s books include Respect, Det Nye Babylon, The Culture War. How the West lost its Greatness, and her latest, New Left Tyranny. The Authoritarian Destruction of Our Way of Life is available on Amazon, Barnes and Noble, across the USA and in 60 countries world-wide. New Left Tyranny shows how the neo-Marxist New Left turned their back on historical Western principles and became a destructive authoritarian force. www.theherlandreport.com
Previous Friedrich Hayek and the West returning to Feudalism – WND
Next Paul Craig Roberts: “Herland Report is Important perspective, impressive truth-telling, outstanding work.”