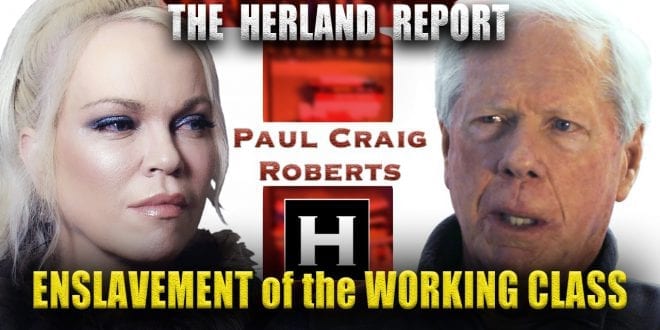 Herland Report:  Robbery capitalism, enslavement of working class: “We are now back to robbery-capitalism. There are no countervailing powers and no media to constrain them.”

“The reason Noam Chomsky and I can speak freely is because we don’t want anything from the establishment.”

“We are not depended on them. If we were, we would be shut down. So, you have a situation in the West where there is hardly anybody who can afford to speak freely.”

This says one of America’s leading political economists, Dr. Paul Craig Roberts, chairman of The Institute for Political Economy, former editor of the Wall Street Journal, to The Herland Report in a new show.

He is a regular contributor to the Herland Report news site as well as The Herland Report TV, awarded the Treasury Department’s Meritorious Service Award for “his outstanding contributions to the formulation of United States economic policy.”

Robbery capitalism, enslavement of working class: Many of the leading Western philosophers over the years have spoken about the need for fearless speech and critical thinking and investigative journalism and independence from power structures.

About this, Dr. Roberts says:

“In the US, all of these countervailing powers have been destroyed. For example, one of the main results of offshoring the middle class jobs, the manufacturing jobs, was to destroy the unions.”

“So, there is no longer any constraint by the union as a workforce, or employers. We are now back to robbery-capitalism because the unions are gone.”

“A few exist and they are in the public sector and they are now beginning to starve them out as well. No raises, cuts, they use all sorts of tactics. And there is no longer a media to constrain them. Where is that limit now? It is gone.”

“The deterioration happened in a fairly short time. It was not a long drawn out procedure. If you think back to post World War II, we had a country that was a real country back then.”

Robbery capitalism, enslavement of working class:  “The pendulum has swung to robber-capitalism. The only mark of success is money. How you get it doesn’t matter anymore.”

“I can remember when a billionaire was unknown, now everyone on the Forbes 400-list is a billionaire. We talk about individuals who have 100 billion dollars.”

“That was the stats of the entirety of the Federal government when John F. Kennedy was president. So, now one person has a hundred billion dollars.”

“This is America. The majority population cannot raise 400 dollars cash without selling personal property, personal assets, their TV, their car, their ring. Yet, we have people worth 100 billion dollars.”

“I criticized globalism years ago and offshoring new jobs. I was accused to be against free trade, but it has nothing to do with free trade.”

“So, what this does is it sends you to where labor is cheapest, where there is no regulation because then your profits are maximized.”

“And those profits only go the management and the owners. But the cost of getting those profits is that you have destroyed the middle class.”

“In that sense, president Trump is right. The country has deserted its own and it is largely the reason for the rise of China.’

‘So, by doing this, we have created another power that is a constraint on American Unitarianism, which is China. They now know how to do thing that we do not know anymore.”

The level of censorship in social media and search engines is all-time high. Do like thousands of others, subscribe to The Herland Report newsletter here! Led by Scandinavian bestselling author, Hanne Nabintu Herland, The Herland Report news and opinion website provides independent analysis from leading Western intellectuals and ground breaking YouTube interviews, cutting through the mainstream media rhetoric. It is a great place to watch interviews and read the articles of leading intellectuals, thought leaders, authors and activists from across the political spectrum. The Herland Report believes in freedom of speech and its editorial policy resides above the traditional Left vs Right paradigm which we believe has lost its relevance and ability to describe the current driving forces in Western politics.
Previous We need empathy: What can motivate us to do good to others?
Next Focus on Christianity defined at our YouTube Channel “SPIRIT and FAITH”