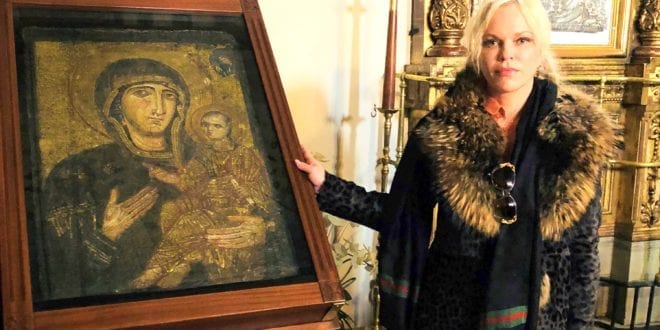 The Eastern Orthodox Church is honored by Christians from all over the Middle East, Ukraine, Russia, Ethiopia, Greece and other Eastern nations celebrate the physical and spiritual light that came from Jerusalem after the death and resurrection of Jesus Christ.

Although the dates may vary due to different calendars, the Easter celebrations mark the centerfold of the Christian faith which is adhered to by billions across the nations.

We celebrate with our brothers and sisters, as the holy fire ascended in the Holy Sepulchre in Jerusalem and Patriarch Theophilos III led the celebrations as the fire was transported to other Orthodox nations.

Over 2.3 billion Christians attempt to follow the example of Jesus with humility, justice, kindness, honesty, virtue and love and founding values. (Feature photo: Hanne Herland next to the Virgin Mary (Mother of God) icon, in the Ecumenical Patriarchy, Istanbul, Turkey.)

Orthodox Easter: Born in a manger, far from presidential palaces, the symbolism of Jesus Christ’ birth carries oceans of hope for those less fortunate – and for the rich.

He was worshiped by Eastern astrologers who found his star and brought their wealth to lay down at his feet. This is The True Meaning of Christianity.

Kings and queens have since meditated at His altar, the poor, the desperate and desolate have found peace connecting to his eternal star.

The true message of Christianity transcends class, race, gender and cultures. This is the mystery of which the Eastern Orthodox Church speaks: “God cannot be grasped by the mind. If he could be grasped, he would not be God,” as stated by Evagrius of Pontus.

The founding father of what later became the largest religion in the world, the Eastern philosopher and spiritual icon, Jesus son of Mary, outlined the very solution to civil strife, division and war.

His simple message was “Love one Another,” writes historian, author and founder of The Herland Report, Hanne Herland in her column at World Net Daily, the world’s largest conservative news network.

Easter is of deep spiritual and metaphysical importance to Middle Eastern Christians.

As Huffington Post’ David Dunn commented: “Easter in the Orthodox Church is called Pascha, which is a nod to the Jewish Passover.

To be clear, when it comes to Orthodoxy and the church traditions that grew out of Rome, there is more that unites us than divides us, but what does make Orthodox Christianity different is most pronounced in the way we prepare for, and celebrate, the Resurrection.

Orthodox Easter: More significant is the way we enter Lent. There is no Ash Wednesday service in the Orthodox Church. We have Forgiveness Sunday. Our journey to the cross begins with a ritual in which every parishioner ends up having asked forgiveness from each other.

Our services during Lent are long and often, and finishes upon Easter Saturday night. This is especially true during Holy Week.

We alternate between standing, bowing, and full prostration. We recite the Psalter over the symbolic tomb of Christ in an all night vigil. We stand and listen to the Passion Gospels in a three-hour service (that ends with even more prostration).”

Orthodox Easter: The message was love thy God and love thy Neighbor. Do good to others. Live insuch a way that you treat others with respect, give freely to those in need.

Be honest, honorable, trustworthy, accountable, true, faithful. The ideal is to keep the commandments and acquire a great life that prepares you for the afterlife, in which there will be a judgement on how you spent your short lived days on this planet.

The existential peace found in the metaphysical fellowship between God and man, described by Michelangelo in the Sistine Chapel in Rome as God touches the finger of Adam, becomes the very solution to this world’s problems. We need the touch of God to transcend from darkness to light.

Orthodox Easter: “Come to me all ye who are burdened, and I will give you rest” speaks the Master Jesus. That rest – the peace not of this world – becomes a man’s source of new energy, of wisdom, understanding, perseverance and love for others.

Christianity is not foremost about how “I can be blessed, get my promotion, get rich”. In an age of endless materialism, some forget that the main commandment was not “love thyself”.

God is not a genie in a bottle, some power I can sway to do my will. Rather, I am to do His will embedded in a single word: love.

The call for loving your fellow man, suffering when he suffers, helping him the instant you find the means to, constantly looking for ways in which you can ease other’s pain – this is The Gospel. St. Seraphim of Sarov, one of the Orthodox Fathers says:

“When the Spirit of God descends upon a man and overshadows him with he fullness of his outpouring, then his soul overflows with a joy not to be described, for the Holy Spirit turns to joy whatever he touches. The kingdom of heaven is peace and joy in the Holy Spirit. Acquire inward peace and thousands around you will find salvation.”

It is impossible to exaggerate the importance of Christianity’s influence on Western values. The message of the world’s most famous spiritual leader, Jesus Christ, was revolutionary in its definition of the value of each human life.

Previous Happy Easter! We join the Orthodox celebrations of the Easter Message of hope to the World
Next Russia’s war in Ukraine: The End of an Economic Illusion