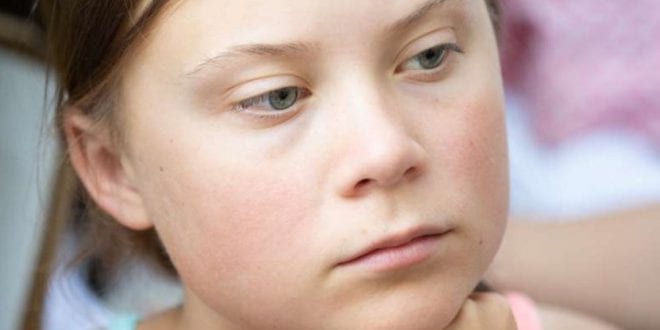 Herland Report: The use children as bait to create media sympathy for various causes, is an increasingly used method in the West.

Latest, the public child abuse of Greta Thunberg, the Swedish 16 year old lured into the role as “media puppet for climate change.” She recently spoke at the UN, probably without a clue of the sinister political game she is a useful tool for.

The teenager is even nominated for the Nobel Peace Prize this year, which she might get judging on the politicized way that the Norwegian Nobel Committee picks its candidates.

Whomever is popular in the ultra-liberal mainstream media has in recent years suddenly also been awarded the Prize, disregarding the requirements stated in the will of Alfred Nobel, writes Hanne Nabintu Herland, founder of The Herland Report, at World Net Daily, one of America’s leading Conservative outlet.

Swedish Greta Thunberg has a known past with mental issues, a diagnosis of Asperger’s syndrome, high-functioning autism, depression, a history of self-starvation and obsessive compulsive disorder.

This is the child now pampered by power structures in society to travel the world with the mainstream media covering her every step as she gives apocalyptic speeches and end-of-the-world threats.

As the world searches for heros, someone in powerful places has decided that Greta Thunberg is what we need. Let us guess that it will remain that way for as long as Thunberg and her parents allow the abuse of the girl to continue.

[pullquote]Once it is over, and Thunberg stops being useful to whoever is paying for all of this, we will never hear of her again.[/pullquote]

The young girl initially found world fame just a year ago, after organizing school strikes in her home town in Sweden, skipping school and demanding climate change to be taken seriously by world leaders.

Then someone paid for the community organizing of similar protests in over a hundred cities. Since then, someone has organized an unbelievably long Wikipedia bio, has paid for her being forefront at the World Economic Forum in Davos, in front of the British Parliament, at UN Climate Talks and taking center stage in mainstream media.

After dropping school, again, to travel the world and perform theatrical, angry speeches, one wonders what benefit it will bring her later in life.

The world truly has gone mad. Thunberg, now used by the highly politicized “climate change” industry is only 16!

The child is allowed to give hysterical, rude talks about “the world at mass extinction, entire ecosystems collapsing, the end of the world stories.

“We are in the beginning of a mass extinction and all you can talk about is money and fairytales of eternal economic growth,” to cite Daily Wire.

It is utter stupidity. Thunberg, for one, would not even be able to travel was it not for economic growth and billion dollar wealth pushed into the very same industry she now is a poster child for. Who writes her speeches? The guy should be fired.

[pullquote]The disarrayed child is allowed to mockingly shout “how dare you” at the grown-ups in the UN assembly, who have to sit and listen to such rubbish simply because big money has paid for her very entrance.[/pullquote]

The Swede simply displays a complete lack of manners typical of Western youth these days, which must shock many of the UN delegates who are honorable individuals in senior positions in their respectable countries.

The Greta Thunberg story is a testament of the suicidal state that Western culture currently finds itself in, abusing a young child into such public embarrassment.

Let me predict that nobody will care what will happen to this child in later years, when Thunberg has outdone her use to the mainstream powers.

Is this what we have become, so lightheartedly using her already frail destiny to achieve “sympathy” for a cause that already has billions of dollars in its pot?

Apparently Donald Trump who held a brilliant speech at the UN, is her enemy, aligned with the mainstream media owners, which tells you all you need to know about who pays for the Thunberg show. Everyone knows that China and the Far East are the worst climate offenders, using coal and so on, yet of that Thunberg has nothing to say.

When the parents of the Syrian Boy, Omran Daqneesh, depicted in the iconic orange ambulance, protested against the use of the face of their child, the mainstream media did not report it.

Not a word. The parents reported to Lebanese media that they were furious that their son was abused by rebel groups who used his face in the international propaganda media campaigns against Assad.

The boy’s face, for whom the CNN anchor and the whole world so famously cried, became iconic in Western media, to symbolize the brutality of the Assad regime as Aleppo fell.

Whoever is responsible for the abuse of Greta, let him stop. Let her go home and finish her schooling and get a bright future in Sweden.

Previous No sex Marriage? The end of sex – Maureen McGrath
Next Financial mogul, George Soros speaks about NAZI collaboration as “happiest time of his life”