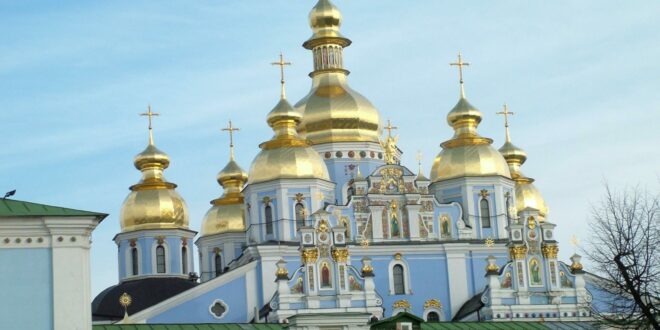 The hierarchs, gathered under the chairmanship of His Beatitude Metropolitan Onuphry of Kiev and All Ukraine.

The Ukrainian Orthodox Church under heavy persecution: They remind the head of state that the UOC stands by the Ukrainian people and has always supported Ukrainian territorial integrity sovereignty, whereas the enmity against the Church only divides the people, writes OrthoChristian.

The Synod also strongly condemns a recently-aired blasphemous television program from Kvartal 95, the studio founded by Zelensky and some school friends in 2003.

“Overcoming the remnants of the communist system is impossible if we allow its methods to be applied, especially in the legal, public, and information space. In no case should we wage war against God, because this is the road to self-destruction,” the Synod states.

Read the Synod’s statement below:

The Ukrainian Orthodox Church under heavy persecution: The Ukrainian Orthodox Church has more than a thousand years of history. Since the Baptism of the Equal-to-the-Apostles Prince Vladimir, it was our Church that was at the origins of Ukrainian statehood. The ups and downs of creative thought, science, and high art were associated with its beneficial educational and educational impact.

During the most critical periods of our people’s existence, the Holy Church was the force that preserved their identity and gave them the inspiration to rise from their knees and move on.

We can see numerous examples of this from the pages of history during the Mongol invasion, the Lithuanian-Polish era, the Cossacks, the Soviet period and until today.

With the beginning of the Russian Federation’s invasion of Ukraine, the Ukrainian Orthodox Church was the first among other religious organizations to strongly condemn this military aggression and express its unconditional support for the territorial integrity of our homeland.

From the very beginning of military operations, our believers have been defending their country, sacrificing their lives for the liberation of their native land.

The Ukrainian Orthodox Church constantly offers prayers and provides material assistance to military personnel, internally displaced persons, and other categories of the population affected by the war.

Against this background, the numerous slanders, insults, and baseless accusations that are being leveled against the Ukrainian Orthodox Church are very upsetting. They not only form a negative public opinion, but also incite religious hostility, which sets some citizens of Ukraine against others, dividing our people, who are so in need of unity in the conditions of war.

The flurry of filth that is poured out on the Church creates anger and intolerance towards each other in Ukrainian society, which, in turn, leads to spiritual decline and the loss of moral values.

This leads to the beating of believers and priests, the seizure and destruction of churches, and the banning of the church itself. In addition, the Ukrainian Orthodox Church is still deliberately called “Russian” and “Moscow,” and believers who are citizens of Ukraine are groundlessly considered enemies just because they belong to this Church.

These draft laws do not comply with international law and the Constitution of Ukraine, establishing advantages and limitations that violate the principle of equality of religious organizations and are aimed at the discrimination of religious citizens of Ukraine and the liquidation of the Ukrainian Orthodox Church.

The Ukrainian Orthodox Church under heavy persecution: Moreover, for the first time in the history of our state, “personal” sanctions were illegally and unjustifiably applied against clergymen who are citizens of Ukraine. This is a gross interference in the activities of religious organizations.

As a result, the activities of entire dioceses that cover tens of thousands of believers and provide large-scale social and humanitarian assistance to the military, internally displaced persons, and many other segments of the population in need are blocked. In fact, these restrictions violate not so much the personal rights of clergy, but the rights of almost a thousand religious communities.

The systematic violation of the right to freedom of religion, the rhetoric of hatred and religious enmity against the Ukrainian Orthodox Church, which is cultivated with impunity in Ukrainian society, leads to such negative manifestations in the media as happened on December 7, 2022.

On this day, a video of the program “Bayraktar New#104” produced by Kvartal 95 was shown on the television and YouTube channel called “Official Channel Chisto News.” For nearly 14 minutes, the program contained blasphemy, mockery, and sacrilege against God and the Ukrainian Orthodox Church, as well as false and unreliable information, contempt, insults to the religious sensibilities of believers and incitement to religious enmity.

Such shocking and blasphemous words cannot be repeated. This is a cynical mockery of the Holy Scriptures, God the Trinity, and the Lord Jesus Christ, for Whom thousands of people sacrificed themselves and went to martyrdom.