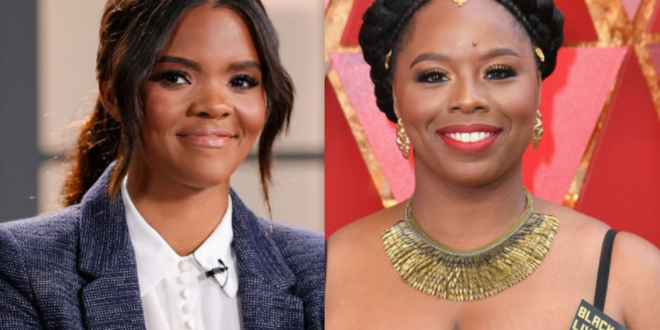 Herland Report: These days it has become fashionable among Marxists to mingle with Wall Street billionaires and buy million dollar homes among the rich and wealthy, just like Black Lives Matter founder, Patrisse Khan-Cullors have done.

Recently, Daily Wire host Candace Owens spoke up about the Marxist Black Lives Matter founder, Patrisse Khan-Cullors, asking her exactly what it was that made her choose to buy several million dollar homes in “white areas”, not “black areas”, since white people supposedly are “her oppressors”.

It looks like it pays off for Black Lives Matter to serve the interests of the ultra-rich, which seems to be to divide the American population into sub-groups according to race and color of skin – an archaic racist attitude also practiced among the NAZIS – and make everyone hate each other. To achieve this, the help of Black Lives Matter has been invaluable.

A divided, disunited and broken people – both economically and culturally  – will not be able to  unite in a revolt if its elites do harm to the interests of its own population. So, helpers to achieve this is of utmost importance. This article is not about the media, but the help of the mainstream press has, of course, been instrumental in fueling this race oriented hatred.

To divide and conquer has long been an applied principle of power to weaken your enemies. Doing it to your own people to cripple and enfeeble your own nation is, on the other hand, the newly chosen American approach.

Naturally, as the Marxist Black Lives Matter has done an excellent job enforcing domestic division, they are not under any “censorship”, neither on Twitter, nor Facebook, nor under Google search engine ban.

On the other hand, the money now floods into the pockets of its obedient black leaders who have accomplished to unleash hatred.

Long gone are the days of the Christian preacher, Dr. Martin Luther King and his message of non-violence in protesting racism. The BLM movement seems to be engulfed in the very opposite value system and moral codex in solving injustice in a population.

Daily Wire writes: “Why doesn’t she want to live amongst black people?” Owens asked. “Why is she choosing to move herself into an all-white neighborhood? These are important questions.”

According to a report from the New York Post, Black Lives Matter founder Khan-Cullors is reportedly on a “real-estate buying binge,” already purchasing four homes with a price tag totaling upwards of $3 million.

Notably, one of the homes was purchased at $1.4 million and located in a secluded area of Los Angeles, where the population is reportedly less than 2% black.

“A secluded mini-compound tucked into L.A.’s rustic and semi-remote Topanga Canyon was recently sold for a tad more than $1.4 million to a corporate entity that public records show is controlled by Patrisse Khan-Cullors, 37-year-old social justice visionary and co-founder of the galvanizing and, for some, controversial Black Lives Matter movement,” dirt.com reported.

The liberal Black Lives Matter founder activist was also eyeing a spot in an “ultra-exclusive” resort in the Bahamas, where musician Justin Timberlake and iconic golfer Tiger Woods both have homes. The Post detailed:

Patrisse Khan-Cullors, 37, also eyed property in the Bahamas at an ultra-exclusive resort where Justin Timberlake and Tiger Woods both have homes, The Post has learned. Luxury apartments and townhouses at the beachfront Albany resort outside Nassau are priced between $5 million and $20 million, according to a local agent.

The self-described Marxist last month purchased a $1.4 million home on a secluded road a short drive from Malibu in Los Angeles, according to a report. The 2,370 square-foot property features “soaring ceilings, skylights and plenty of windows” with canyon views. The Topanga Canyon homestead, which includes two houses on a quarter acre, is just one of three homes Khan-Cullors owns in the Los Angeles area, public records show.

Owens also mockingly commended Black Lives Matter founder Khan-Cullors for staying true to her “communist” values. “She has my respect because she’s unapologetic in her approach. She’s telling you what she is. She’s a Marxist. So Marxists steal money from other people and they enrich themselves until the people that they stole from are poor. And so she has stolen money from other people on the pretext of a lie that is Black Lives Matter.”

“I mean, you have to kind of appreciate the honesty; she’s not hiding by any means, you know. … She’s a communist through and through, and she’s been unbelievably unapologetic in her approach,” Owens added.

It’s unclear if Black Lives Matter founder Khan-Cullors has done anything shady or illegal with the BLM funds, but her actions have prompted Hawk Newsome, the head of Black Lives Matter Greater New York City, to call for “an independent investigation” to find out how the global network spends its money, the Post reported this weekend.

“If you go around calling yourself a socialist, you have to ask how much of her own personal money is going to charitable causes,” Newsome said. “It’s really sad because it makes people doubt the validity of the movement and overlook the fact that it’s the people that carry this movement.”