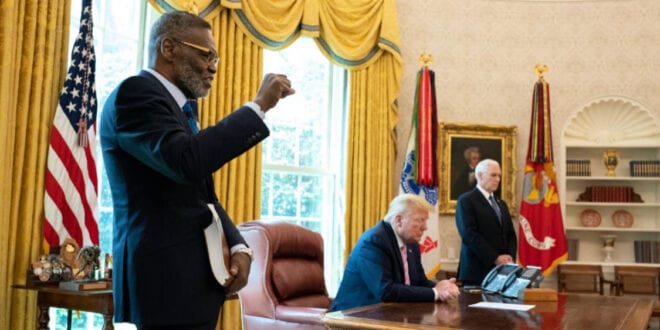 Herland Report: We received news that Bishop Harry Jackson has left us and transitioned to be with the Lord on Monday and therefore release an exclusive interview with him about Martin Luther King Jr. to commemorate this great, spiritual leader.

Below is one of our last interviews with the Bishop, not before published, as the Herland Report TV host, Hanne Nabintu Herland speaks to Bishop Harry Jackson about the Christian preacher, martyr and civil rights icon, Martin Luther King Jr.

Why is Dr. King not popular anymore? Why does the marxist Black Lives Matter movement reject his message of racial reconciliation?

The interview touches upon topics such as the waning respect for the US Constitution, Christianity and the need for moral reform.

“America is losing her ability to call the nation back to accountability, because we no longer honor the Christian preacher Martin Luther King’s Bible and the Constitution, at a level that we once did,” says Bishop Harry Jackson, a leading American social conservative activist, commentator, a famous lecturer who held an MBA from Harvard Business School. He was also the Chairman of the High Impact Leadership Coalition and a best-selling author.

A participant in numerous Herland Report interviews, he was a highly respected guest of honor for us who are working with these projects. He was a regular guest at CBS, 700 Club, CBN, featured in articles in The New York Times, Los Angeles Times, Washington Post, The Washington Times and many more.

Fox reports, the Maryland pastor and unofficial faith adviser for President Trump, died Monday at age 66, his church announced. “It is with a heavy heart that we notify you that our beloved Bishop Harry R. Jackson, Jr. has transitioned to be with the Lord on November 9, 2020,” Hope Christian Church wrote on its website.

EXCLUSIVE: Bishop Harry Jackson has left us, hear him speak about Martin Luther King:  The Bishop says: “The Constitution was meant to be a philosophical/strategic overview of how our society should be constructed, and in a lot of ways it had to be divinely inspired, simply because of clarity, and brevity, and the fact that it has lasted so long. We are drifting away from our Constitution just as quickly.”

Bishop Jackson continues: “The secular community as a church in America has drifted away from the biblical moorings of our society, and it is because we have not taught and handed-down to next generations these truths that we hold to be self-evident.”

“Back in the civil rights days, Martin Luther King Jr. was esteemed by most Americans as an iconic classic American. If you go past him, you have got to go all the way back to the revolutionary days to have people that seemed to embody ‘Americanism’.”

“Martin Luther King put his case to the American public by lifting up a Constitution in his left hand and a Bible in his right hand. Meaning, he had a higher framework, a way of referencing truth and righteousness. He was a pastor of a church. His father’s original name was Michael King and he changed his name to Martin Luther King because of his belief in Martin Luther, the great reformer of the Christian church.”

EXCLUSIVE: Bishop Harry Jackson has left us, hear him speak about Martin Luther King: “I think America is losing her ability to call the nation back to accountability, because we no longer really honor the Constitution or Martin Luther King’s Bible, at a level that we once did.”

“When the U.S. had universally Christian values, even people who did not choose to live by the Bible were aware of biblical framework. They created the Constitution as a derivative of truths found in the Bible.”

“I think Martin Luther King Junior saw from his childhood his role was to reform and change fundamental things about American thought life, by how they viewed the value of human life and free speech was at the heart of it. I talked to many of the civil rights leaders that are still alive, and they all said that they wanted to use free speech to show America how bad racism was.”

Bishop Jackson: “It would be a catalyst for repentance or change that would transform American culture. The truth is, that is exactly what happened.”

“A minority of people who are descendants of former slaves did regional campaigns to show up in equities and eventually some of those images created the Voter Rights Act of the middle 1960s, and all of the laws that changed public accommodations and people’s ability to be educated.”

“It is possible to have a revival that affects America and our sense of moral boundaries, what we should be about. In our communities, there can be activism based on that morality that could advocate for specific social change, and thirdly, any lasting change is going to be codified in our laws, in Congress and Senate and our president. We need to make these adjustments, like Martin Luther King did.”

Dr. Paul Craig Roberts about The Herland Report: “Important perspective, impressive truth-telling, outstanding work.” “The Herland Report in Scandinavia is a good source of information and thoughtful comment from around the world.”

Previous The West Has Thrown Itself Into the Waste Basket of History
Next The Coup That Deposed a President, or not yet?