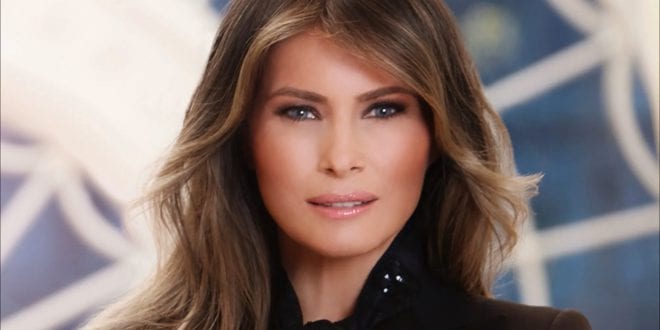 Herland Report: In arguably the most evil time in the history of the United States, where domestic forces strive to end democracy in the nation and implement a brutal oligarch rule, Melania Trump entered the stage as the most beautiful first lady since Jackie Kennedy, writes historian, author and founder of The Herland Report, Hanne Nabintu Herland.

As a statement to the greatness of the American melting pot, her spectacular story from a young European girl who ended up as the president of the United State’s wife, reflects the remarkable hope of the American dream.

But America lost touch with its historical values, its respect for manners, the family, the honor of the woman and its traditional belief in God’s abundance and miracles.

At the height of its power, America scrapped the very values that once made it great.

In a time where traditional ideals such as tolerance and free speech is misused as a New Left tactic to legitimize bullying and hatred of conservatives and promoters of national sovereignty, the First Lady has also been among those subjected to the distasteful mainstream media mob tactics of hatred.

Yet, the breathtakingly beautiful and gracious First Lady rises above the pettiness of American evil.  Knowledgeably educated in the problems of the Soviet Eastern Europe, she now watches how the Democrats attempt to infuse the same God hating Soviet socialism into the United States. Socialism and its Marxist heritage brought to power an abusing Communist elite, maybe worse than any before them.

As lack of wisdom permeates the Hollywood hedonist public, engulfed as they are in the same type of Soviet propaganda through the globalist oligarch owned US mainstream media, the First Lady must be surprised to watch how a culture falls.

As over 90 % of the American media is globalist oligarch owned, they do not exactly seem have the best for the people in mind. The amassing of wealth into the hands of the few has probably never been worse than now.

When a nation loses its historical values, its respect for the Almighty God and begins to despise its traditional belief in the family, the honor of the woman, in kindness and justice, – this happens.

The rule of the raging mob and its leaders have long threatened to end American greatness.

This is the scene set for the honorable Melania Trump, fluent in five languages — Slovenian, English, French, Serbian, and German.

The First Lady has demonstrated her effortlessly queenly valor by not responding to the lack of manners on such crude display.

Not to mention the racism and lack of respect for Europeans as demonstrated in 2018, as the classless New Left Hollywood actors and TV personalities sought to racist defame her beautiful accent.

If any, the First Lady Melania Trump is my sister. She is a role model for all women who seek to rise above the petty evil of the racist New Left Western world, and be honorable women who graciously stand by our husband’s side, with strong belief in the values of the historical West.

Melania Trump lives in the age of civil strife in the political civil war against her democratically elected husband, Donald Trump. For whom, the American oligarchs, arguably angered at the prospect of losing money and power back to the American people, have fought in a drama never seen before.

The globalist, transnational business model arose from the later 1980s, as leading American conglomerates had outgrown local markets and set their eyes on global trade.

Since then, the middle-class Americans have lost the power to oligarch rule. The outsourcing of jobs to the East left manufacturers in the US suffering, millions of jobs and corresponding know-how lost.

Depending on borderless nations, globalist business does not pay tax to nations, rise above national laws, discredit international law and push for a one world order. All wealth is assembled into the hands of the few.

The rise of Donald Trump was one of the obstacles, as he was democratically elected by the American people to return jobs to the working and middle-class. The idea was to cause the rise of America, again.

The end of globalism would spell the end of the rise of a small elite who now own almost everything. According to Oxfam, less than 60 individuals owned more than half of world assets by 2016.

Judicial Watch, the US public watch dog in Washington, steadily sues the American government for corruption, retrieving documents withheld from the public that document the ongoing attempts of coup d’etat. At The Herland Report, we have several interviews with leading Judicial Watch directors, former NSA directors, professors, bestselling authors, CIA officials, senators and former presidential candidates. The Herland Report YouTube channel can be viewed here, where these interviews are logged.

Should we share the wealth or should a few of us own it all? Donald Trump seems to fight for the first choice, the return of democracy.

Leading intellectuals, such as Dr. Noam Chomsky, professors at Princeton University and many more have for years spoken of the trend towards an oligarchy. Regular Americans work two or three jobs to get by, 1987 marked the high point for middle-class wages.

With this as her world scene, the epitome of beauty and unique qualities, Melania Trump graces America with her presence as a symbol of hope.

The First Lady is the hope of a new tomorrow in the United States, where the return of traditional civility and manners will again permeate the nation.

United in the greatness of the belief in God, the American melting pot can again embrace everyone, disregarding of race, creed, ethnic origin in accomplishing what the Americans do best: The miracle of the American dream. Happy birthday to the honorable First Lady of the United States, Melania Trump.

Hanne Nabintu Herland is a historian of religions and bestselling author. She is the founder of The Herland Report Scandinavian news site, TV channel on YouTube and Podcasts which have millions of readers/viewers yearly. This is a great place to watch interviews with leading intellectuals, thought leaders from across the political spectrum. Herland’s latest book, The Culture War. How the West lost its Greatness, is available in the USA and 60 countries world-wide. www.theherlandreport.com
Previous Conservative National Values Resurrection – Paul Craig Roberts
Next Corona definerer slutten på åpne grenser i Europa – Marine Le Pen