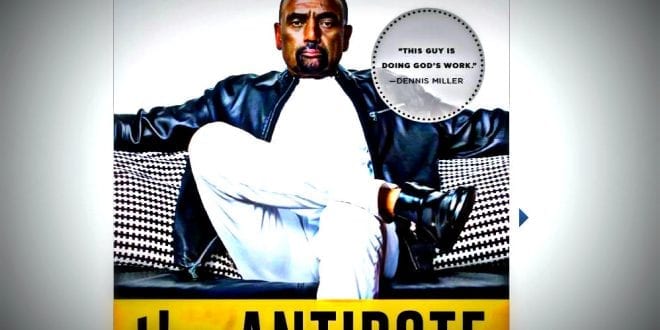 Jesse Lee Peterson on ‘Healing America from the Poison of Hate, Blame and Victimhood

From a perhaps unlikely place, here comes some fantastic medicine for what is ailing America. It’s “The Antidote: Healing America From the Poison of Hate, Blame and Victimhood” by Jesse Lee Peterson.

Indeed, Jesse Lee Peterson is considered by many to be the most courageous, outspoken critic of the “civil rights” establishment in America today.

For the better part of a century, says Peterson, black people have labored under the spell of the progressive left – the race hustlers, media hacks, politicians, community organizers and the like – who promise to “fundamentally transform” America.

Healing America: However, the transformation they promise, while resulting in unearned benefits like welfare, food stamps, subsidized housing, payouts from lawsuits, and maybe one day even reparations, forces recipients to sacrifice something of infinitely greater value: the sanctity of the two-parent family. It is a devil’s bargain.

To make this experiment work, the left has created an ungodly and unhealthy environment, one in which the white population is made to feel guilty and the black population made to feel angry. The pattern is simple: Children – black or white – when deprived of fathers, grow up angry at their parents and the world.

Consider what nationally syndicated radio talk-show host Dennis Prager says about Peterson in his introduction to “The Antidote.”

“In the thirty-three years I have been broadcasting, I have interviewed probably a thousand authors. I have interviewed virtually every major thinker who speaks English. Yet, a full hour that I interviewed Jesse Peterson stands out as one of the most significant hours I ever broadcast. It was mesmerizing radio. …

“There are many admirable traits that a good person may possess – honesty, integrity, compassion, among others – but there is one trait that very few good people have. That trait is courage. … Jesse is fearless. Or to be more accurate, he does not allow fear to govern his behavior or speech. I have no idea whether or not he has fears. I only know that fear plays no role in his work. He answers to God and his conscience.”

Healing America: White children direct their anger in a thousand different directions. Black children channel theirs, for the most part, in a single destructive direction – toward white people. The progressive left encourages them to do this, enables them and rewards them. After all, this anger fuels the system that keeps them in power.

As bleak as this all sounds, an antidote exists – one that saved Peterson’s own life, that of his son, and those of countless young men who have been counseled at Peterson’s famed Los Angeles-based organization, BOND (Brotherhood Organization of a New Destiny).

The perverse genius of the left, Peterson explains in “The Antidote,” has been its ability to capture black anger and project it outward toward anyone, black or white, who resists the Democratic agenda. By encouraging a resentful dependency, the left has instituted a new kind of slavery in the black community as emotionally shackling as the physical slavery that first brought Africans to America.

Peterson knows this story from the inside as few other people do. Born on an Alabama plantation, he was abandoned by his father before he was born. After high school, Peterson moved to Los Angeles and for the next 20 years moved purposelessly through life, channeling his internal anger outward toward white people and America in general.

After a spiritual transformation, Peterson founded BOND, a nationally recognized nonprofit dedicated to “Rebuilding the Family by Rebuilding the Man.” Peterson is also the founder of The BOND Leadership Academy, a private school in Los Angeles. He’s a radio talk show host, speaker and the author of “SCAM: How the Black Leadership Exploits Black America” and “From Rage to Responsibility.” Peterson writes a weekly column for WND.com and appears as a media commentator on Fox News Channel, CNN and other national TV and radio networks.

Providentially, Peterson has discovered the “antidote” to that which ailed him and which still troubles black America – an indeed, troubles the rest of America. In the mission he has undertaken ever since, and in this hopeful book, Peterson shares what he learned on his personal road to Damascus.