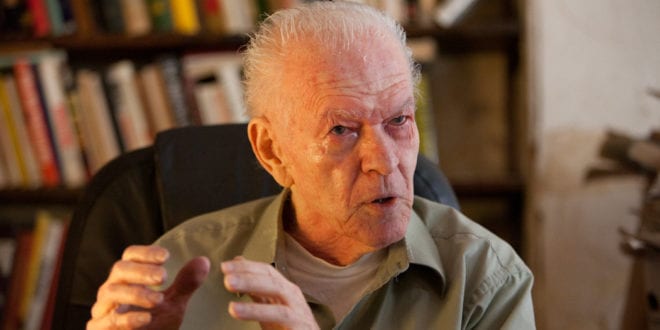 Color Revolutions: The Gene Sharp manual on how to create revolutions – From Dictatorship to Democracy

Herland Report:  Color Revolution Gene Sharp: CIA front man, a professor at the Albert Einstein Institute, Gene Sharp wrote the manual on how to create a revolution and overthrow governments, and since then we have seen Color Revolutions happening all over the world.

For example, the Arab Spring tactics of infiltrating legitimate movements directly follows the Gene Sharp manual From Dictatorship to Democracy:

Use a grievance that the local population has against its political leaders, identify and support those who oppose the current government.

Then infiltrate and strengthen opposition movements, fund them with millions of dollars, organize protests that seem legitimate.

Then have your paid political instigators dress up in regular clothes to blend in and portray the whole thing as legitimate.

It happened at the Maidan in Ukraine, where mercenaries later said they were instructed by Americans to begin shooting. This instigated the overthrow of the Viktor Yanukovych government.

It happened in the Color Revolution in Serbia that led to the fall of Slobodan Milosevic.

It happened in Egypt and took down Hosni Mubarak.

It happened in Libya and ended with the killing of Muammar Gaddafi.

It happened in Syria, as “peaceful protesters” suddenly were not that peaceful after all and the worst humanitarian catastrophe since World War II then took place.

BBC credits Gene Sharp as the man behind the toppling of Mubarak in Egypt, Milosevic in Serbia and Viktor Yanukovych in Ukraine, the Color Revolutions.

Gene Sharp: How to create division in a population, and brew revolution

Color Revolution Gene Sharp: Gene Sharp founded the Albert Einstein Institute and reportedly the only other employee was Jamila Raqib.

It is said that Albert Einstein wrote the foreword to Sharp’s first book – Gandhi Wields the Weapon of Moral Power: Three Case Histories – published in 1960.

Despite these successes and a Nobel Peace Prize nomination in 2009 he has faced almost constant financial hardship and wild accusations of being a CIA front organization.

The Albert Einstein Institution based on the ground floor of his home is kept running by sheer force of personality and his fiercely loyal Executive Director, Jamila Raqib.

Gene Sharp was nominated for the Nobel Peace Prize in 2009, 2012, 2013, 2015, which may demonstrate powerful groups’ support for his candidature.  He never got the prize and died in January, 2018, surrounded by secrecy like he always was.

As Slobodan Milosevic in Serbia and Viktor Yanukovych in Ukraine fell to the color revolutions which swept across Eastern Europe, each of the so-called “democratic” movements paid tribute to Sharp’s contribution, yet he remained largely unknown to the public.

“One of the main points which we used was Sharp’s idea of identifying a regime’s pillars of support. If we could build a relationship with the army, Mubarak’s biggest pillar of support, to get them on our side, then we knew he would quickly be finished,” said one of the Arab Spring instigators in Egypt in 2010, according to the BBC.

The BBC documentary demonstrates the links between Gene Sharp’s alleged CIA material on how to overthrow governments, the CANVAS resistance in Serbia that led to the overthrow of the serbian government.

The very successful Arab Spring revolutions in the Middle East led Islamist groups taking power in country after country, destabilizing the nations. It also led to the transnational takeover of oil and gas reserves in some countries and halted domestic economic growth as well as in cases like Libya, produced a civil war that still rages on.

BBC credits Gene Sharp as the man behind the toppling of Mubarak in Egypt, Milosevic in Serbia and Viktor Yanukovych in Ukraine, the Color Revolutions.

In 2009, Egyptians dissatisfied with the Mubarak leadership in Egypt went to Belgrade, Serbia to learn the Gene Sharp tactics that had worked so well there in overthrowing Milosovic.

The new method of professionalizing mass protests as a method to overthrow governments proved very successful in the Arab Spring too. The tactics were straight out of the Serbian Srdja Popovic CANVAS training curriculum, a Stratfor report said. The students who led Otpor used Serbian translations of Gene Sharp‘s writings on nonviolent action as a theoretical basis for their campaigns.

The Gene Sharp manual was so successful, the Journeyman documentary on the massive CANVAS success is worth watching.

“Revolutions are often seen as spontaneous,” Ivan Marovic, a former CANVAS trainer said. “It looks like people just went into the street. But it’s the result of months or years of preparation. It is very boring until you reach a certain point, where you can organize mass demonstrations or strikes. If it is carefully planned, by the time they start, everything is over in a matter of weeks.”

Revolution and its Marxist roots

Color Revolution Gene Sharp: Gene Sharp probably got the idea from its Marxist roots. Bloody revolution was a core value since the Karl Marx movement first began. The 1960s neo-Marxist student revolutions have since slowly broken down the very fabric of Western unity and stability.

Repression of free speech, tolerance, and respect for plurality has since become the trademark. In A critique of pure tolerance, Herbert Marcuse (1898-1979), the father of the neo-Marxist 1960s student rebellion, defined how the rebellion was to succeed in tearing down historical values:

Majority views were to be crudely oppressed in order to push for the deconstruction of traditions.

Marcuse’s shocking words reveal the authoritarianism in the New Left pursuit, prescribing repression of large parts of the population as a method to forcefully silence opposition and achieve the desired goal:

To revolutionize the West according to the post World War II neo-Marxist ideology.

The New Left generation who were permeated by neo-Marxist thought, later became the political leaders, professors, media editors, and public servants who control the government bureaucracy in many Western nations today.

Merged with the globalist, billionaire capitalist structures, they became the new elite, forcefully implementing their ideals into the very fabric of the New West.