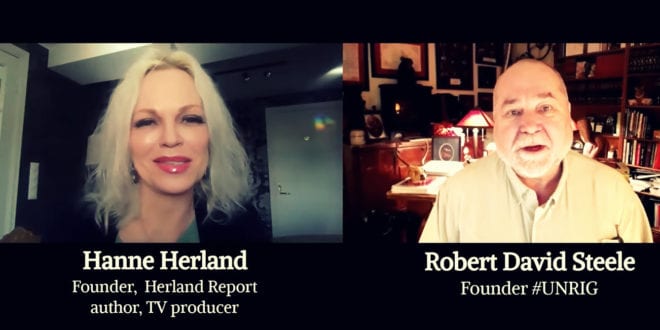 Herland Report: Robert Steele interviews Hanne Herland on her new book New Left Tyranny: “Black Lives Matter is being abused to benefit white, rich billionaire agenda for the takeover of power in the United States, just like I write about in my new book,  New Left Tyranny. The Authoritarian Destruction of Our Way of Life,” says historian of comparative religions and bestselling author, Hanne Herland to Robert David Steele on The Steele Report.

Donald Trump may easily be the main profiteer from the BLM riots and win the upcoming election, if nothing unforeseen happens.

Sane Americans will want law, order and jobs, not Democrat supported defunding of police and an anarchy of rude white millennials who think it is good fun to burn cars, smoke marijuana and quit school.

As a consequence, social cohesion dissolved into selfishness and a lack of personal responsibility. Western societies have been fragmentized into the hate politics of Identity Politics.

Historian Hanne Herland: When globalism first was introduced in the mid-1980s, we were told that this would lead to the rise of the poor in non-Western countries. The seamstress in India, the factory worker in China, the poor in Africa were to participate globally now, in rising to new economic standards. We were to share our wealth with them.

In the West, we were told to accept this change as jobs were outsourced to the East, in solidarity with the poor in Asia. The New Left, with its inbred Marxist “workers unite” internationalist attitude instantly pushed heavily in support for globalism. Whoever protested was “a selfish Westerner, chauvinist, racist, ultra nationalist, Nazi, fascist” and, in its routine, the rest of the demonizing slogans designated to eradicate the belief in national sovereignty.

Robert Steele interviews Hanne Herland on her new book New Left Tyranny: Karl Marx was right in asserting that a new class steadily arises to replace the old bourgeoisie or elite, and it may be argued that the atheist-socialist class has been the most totalitarian in history.

It could be argued that the aim is for the post-modern socialist state to “take it all” and re-distribute among its wealthy friends. That’s what globalists tend to do, as the political system is easily exploited with the possibility of funding Congress members all the way to the top.

the United States, private corporations may fund the campaign for an individual running for Congress, then have the same person work to amend laws while in office that benefit the same group.

Historian Hanne Herland:  The transnational globalist business model works perfectly with socialism or neo-Marxist thinking. The socialist leaders make sure that the people give up all their private rights and then assemble all the national wealth into state systems.

Robert Steele interviews Hanne Herland on her new book New Left Tyranny: Marxism was at heart internationalist and hoped for borderless societies. The globalist capitalist system also depends on borderless societies, its owners not paying taxes to any nation, free to outsource jobs to wherever the workers are paid less.

No responsibility for the working class, the allegiance only to profit.

What Marxists often do not comprehend, as the socialist ideology is religion to them and Karl Marx their God, is that the Capitalist model is not an ideology. It is an economic model. This means that to a Capitalist who hopes to maximize profit, it does not matter whether he works with Marxists, Socialists, or fellow Capitalist – whether Chinese, Japanese or people from Albania. His aim is capital gain or to maximize profit in order to enhance economic growth.

Historian Hanne Herland:  Socialism appeals to capitalist owners, maybe even more in the globalist world than before, partly because it is the very best way to control a population while milking the very top state structures economically. If you control the state, you control the economic finances in addition to global dominion of private capital.

Regarding Black Lives Matter, one example illustrates the point: While the Black Lives Matter funding is said to go to those in need, donations go directly to a fundraiser called “Act Blue” that has given hundreds of millions to white, rich Democrats running for President. Act Blue is actually a fundraiser for the Democratic Party. So, abuse is the word and death of the working class under globalism the aim.

Previous The neo-Marxist New Left 1960s revolution: Total Catastrophy
Next The shocking American deterioration: How Long Before America Appoints a Horse to the Senate?