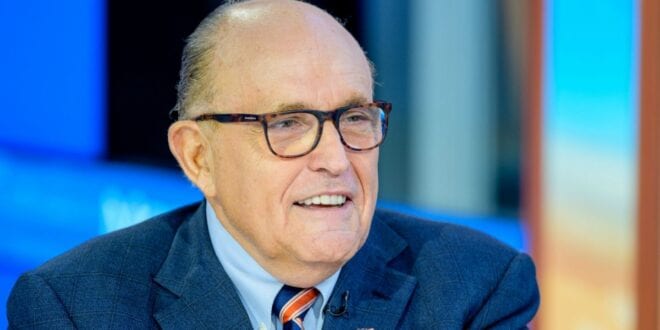 Herland Report: Yesterday in a press conference, Rudy Giuliani legal team, Sidney Powell and two other members of the team gave an overview of the evidence.

It is overwhelming. There was fraud in the voting machines and software in every state, and massive mail-in ballot fraud in the main Democrat cities where the election fraud is most evident, writes Dr. Paul Craig Roberts.

I was stunned that even some of my readers kept asking why Trump hadn’t presented the evidence to back up his claim of election fraud.  I have to keep reminding myself of how poor the education system and the media are in the US and how insouciant Americans tend to be.

Evidence takes time to collect.  You have to establish a legal team. You have to interview the people who come forward.

Witnesses have to sign affidavits under penalty of perjury. You have to organize the evidence and turn it into court cases.  This is what the legal team has been doing in the days since the election.

Giuliani Legal Team Presents Overview of Election Fraud Evidence: As stated, yesterday in a press conference, Giuliani, Sidney Powell, and two other members of the legal team gave an overview of the evidence.

It is overwhelming. There was fraud in the voting machines and software in every state, and massive mail-in ballot fraud in the main Democrat cities where the election fraud is most evident.

In presenting an overview of the evidence, Giuliani and two female members of the legal team shamed the media for their lies, their censorship, their disregard for fact, and their hatred of President Trump.

They shamed the presstitutes for their indifference to election integrity and for their belief that all means no matter how illegal, unconstitutional, or foul that can be used to get Trump out of office are justified.

Readers have asked the meaning of algorithm in the legal team’s description of the use of the Dominion voting machines and Smartmatic software used in the election fraud. An algorithm is a step-by-step set of instructions to accomplish a particular task.

Computers use algorithms, in the form of programs.  The claim of the legal team is that the voting machines and software contained an algorithm to switch 2%-3% of the vote from Trump to Biden, and to spread it out around the country so as to go undetected.

But the election thieves were unprepared for a Trump landslide, and it became apparent that switching 2%-3% of the vote wasn’t going to cut it.

The software warned whoever was monitoring it (those stealing the election) that the goal of election theft was in jeopardy, and that the algorithm was going to fail.  It was then that the entire system was taken offline.  This is when the votes stopped being counted in the dead of night in all the swing states the Democrats are trying to steal.

Biden was way behind, and the vote deficit was going to have to be made up. It was made up with the use of fraudulent mail-in ballots.

As I have said previously, there is no one in the American media today who could have been hired by the Wall Street Journal in the 1980s.

What passes for journalists today are not journalists.  They haven’t an ounce of integrity or honor or even a basic understanding of the United States.

And they proved it in the question period afterward.

Evidence and fact mean nothing to people hired to suppress it. The American media, never very good, ended its life in the last year of the Clinton regime when the government permitted a dispersed and independent media to be concentrated in the hands of 6 mega-corporations.

I am confident that the presstitutes will not provide the American people with an honest account of what they were told in today’s press conference.  They are not capable of it, and they know that it is not their job.

They and their editors know that any such truthful account means their unemployment.  Here is CNN’s report on the press conference: “Giuliani spouts baseless claims at press conference”;

MSNBC’s report: “Rudy Giuliani press conference an SNL skit of sorts;” Sky News Australia: “Hair dye sweat drips from Rudy Giuliani’s face in press conference.” The total disrespect of factual evidence by the presstitutes could not be more complete. The American media feels justified in withholding facts from the American public and in participating in the destruction of election integrity in the American democracy.  What worse situation can a country be in?

But it is worse than that. These presstitutes see themselves as revolutionaries committed to the overthrow of the evil of white supremacy.

Trump is, in their feeble and brainwashed minds, a white racist and a misogynist elected by racists and misogynists—“the Trump deplorables.”  The presstitutes call the violence that loots and destroys white businesses “peaceful protests.”

Giuliani Legal Team Presents Overview of Election Fraud Evidence: They support the destruction of “white monuments” and “white history.” They turn on any member of the flock that utters a word of truth.

They want Tucker Carlson arrested and Trump imprisoned.  Biden is actually talking about a pardon for President Trump. American media believe that truth is produced by repeating lies over and over until they become “truth” in the absence of any other explanation.

I am impressed that the legal team made it clear that they are not going to be intimidated by the presstitutes’ lies.  Nevertheless, watching the press conference left me with a concern.

I suspect that the CIA or NSA has planted on the team a false story that could end up discrediting their efforts in behalf of election integrity.

The story that worries me is the story that the crooked voting machines and software are owned by Venezuelans and were first devised in order to allow Chavez and Maduro to steal their elections, and that the November 3 votes were sent out of the country to servers in Europe where they could be fiddled with more.  This, the legal team said, is an independent national security issue in itself.

Clearly Sidney Powell believes this, but it seems to me to be farfetched for several reasons.  One is that there is no need to send the votes out of the country to be “adjusted” as the machines themselves were set up to do that.

Another is that Chavez was so popular that he had no need to steal elections.  Remember when the CIA succeeded in overthrowing Chavez and had him in their custody in Venezuela, the people and the military poured into the streets and demanded his release.

The CIA had to release him, and he continued as president.  He was so secure in the people that he had no reason to exact retribution against those who plotted with the CIA against him, just as Maduro has left alone the pawn declared by Washington to be Venezuela’s president.

The pawn has so little support he is not a problem for Maduro, just as the so-called “Russian opposition leader,” Navalny is such an insignificant figure that he is no problem for Putin.

Part of the “votes taken out of the country” story is the claim that US forces seized a Dominion server in Germany which contains more evidence of the fraud.  To me this seems an unlikely procedure. If the US government wanted evidence on German soil, they would rely on German police to deliver it, not send in the US military to seize it.

Moreover, the legal team has not been presented with evidence contained on the server. Possibly the server evidence, if such exists, will be used for criminal indictments, whereas the legal team consists of private lawyers who are not the government and cannot issue indictments.

I think the legal team should have stayed with the acount for which they have about 1,000 affidavits that there was a Democrat plan to steal the election, that the plan relied on the voting machines and software, and that the mail-in ballots were a backup if needed.  When the Trump vote was so much larger than those who programmed the machines expected, the counting was stopped in the middle of the night while in the Democrat big cities hundreds of thousands of Biden votes were produced, with the result being a sudden impossible vertical spike in the Biden vote that highlighted the fraud.

Here is the URL to the press conference if the media hasn’t taken it down as “against community standards.”  There is a long delay in the beginning so move the cursor along until you see Giuliani and begin there.

Giuliani Legal Team Presents Overview of Election Fraud Evidence: Also check out these topics at CNN or FOX News. Other sources may be New York Times, USA Today, the Washington Post or from the British angle, BBC, The Guardian, The Telegraph or Financial Times.