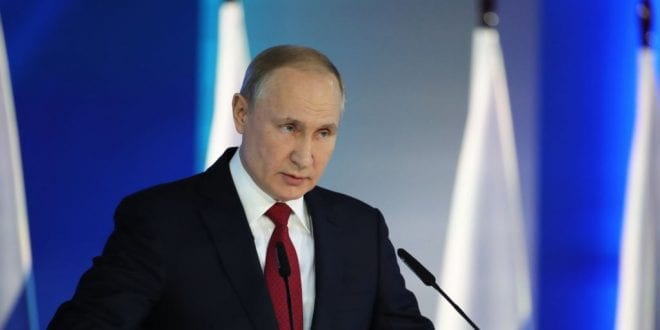 We’ve all seen this just now in the US, and everybody understands what I’m talking about.”

Putin is talking about the censorship in “freedom and democracy America” of everyone who departs from the controlled explanations.

Censorship Is Killing America: No one is permitted to express the view or present evidence that the presidential election was stolen. No one is permitted to challenge or correct any aspect of the Covid narrative.  Any non-establishment view is ruled “against community standards” and suppressed just as in Stalinist Russia, Gestapo Germany, and Orwell’s 1984.

But the situation for Americans is actually much worse than being censored.  Americans who are Trump supporters are being labeled domestic terrorists, and legislation against them is in the works. The legislation pushed by Democrats and the presstitutes has strong support from former CIA director John Brennan and from the Department of Homeland Security.

Former CIA director John Brennan declared Trump supporters to be more dangerous terrorists than the foreign terrorists, such as al Qaeda and ISIS, against whom Washington conducted the “war on terror.”  The bigger problem, Brennan said, is here at home with Trump voters.

Last week the Gestapo-sounding Department of Homeland Security issued a “National Terrorism Advisory System Bulletin” on “domestic violent extremists” who think the presidential election was stolen.  That’s half of the American population. If you believe the voluminous evidence that the presidential election was stolen, you are a “violent domestic terrorist,” all 90 million of you.

As the Establishment has managed to define everyone concerned about electoral integrity a “violent domestic terrorist” and “enemy of democracy,” people are being fired for using uncensored social media.

Colleen Oefelein, a New York literary agent was fired by Jennifer De Chiara, president of the JDLit Agency for posting a profile of herself on Parler and Gab, disapproved sites.  The fact that she posted on these sites meant to her employer that she wasn’t leftwing, and only leftwing employees are acceptable to the literary firm.

Don’t expect to see a discrimination case from the black supremacist Biden has appointed as head of the DOJ’s civil rights division.  White people are not protected by civil rights laws.

Twitter, Facebook, YouTube, Google, Apple, Amazon and the rest of the anti-democratic high tech censors gang up on you and ban you from communicating if you express any Establishment-disapproved views. Mike Lindell, CEO of My Pillow, is lifetime banned by Twitter for maintaining the obvious—Trump’s reelection was stolen from the voters.

Notice that all who make the claim that the claim of election theft is groundless have never examined an ounce of the evidence.  They are issuing an edict that no evidence exists, so there is nothing to examine.  Why then is Maricopa County, Arizona, conducting a forensic audit of the voting in the November election?

In an act of extraordinary misogyny, a House Democrat is trying to get expelled a female Republican from the House of Representatives on the grounds that she expressed support for President Trump’s belief that his reelection was stolen.

Censorship Is Killing America: This makes, according to Democrat Rep. Jimmy Gomez of California, Republican Rep. Marjorie Taylor Greene of Georgia a person whose “very presence in office represents a direct threat against the elected officials and staff who serve our government.”

It is “with their safety in mind, as well as the security of institutions and pubic servants across our country,” Gomez said, that requires Rep. Greene to be expelled from Congress.

Think about that for a moment, and you will wonder if the Democrats are resurrecting the Third Reich, Stalinist Russia, or something worse.

Representative Tulsi Gabbard, the one Democrat in Congress who represents Americans, says it is Jimmy Gomez, John Brennan, and Adam Schiff who are the domestic enemies of America. They are the ones who are taking away our Constitutional protections and free speech. They are the ones who are silencing truth and creating a world of lies in which truth-tellers can be prosecuted and convicted for telling the truth.

Large parts of America are now in the hands of anti-American Third World immigrant-invaders. In San Francisco the School Board headed by Gabiela Lopez reported that 44 schools would be renamed. Schools named after those with ties to slavery, oppression, racism, and the subjugation of human beings, such as George Washington, Thomas Jefferson, John Muir, Paul Revere, Francis Scott Key and Spanish priest Junipero Serra will be renamed.

I could go on at great length, but long articles don’t get read. It takes too much time from TV or the video screen. And having to think is so stressful.  No need to email me demanding sources.  You can find them here.

Previous The Civil War was never about Slavery: History is twisted to fit Identity Politics?
Next Corrupt politicians and foreign governments bankrupt America