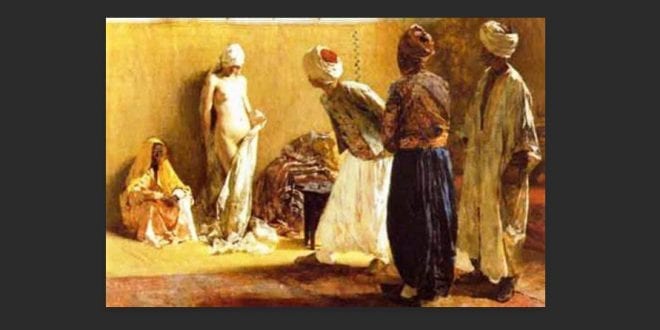 Herland Report: Hanne Herland: As the racism debate focuses solely on white racism, it may be time to remind everyone that it was “white” Christian activists, priests and the British Empire that abolished slave trade.

The slave trade in question began in Africa when the black tribes, in war with each other, sold the slaves that they acquired from other black tribes, to the Arab traders. No white man was around for a long time while this was happening.

Slaves were white, black, Asian depending on who conquered who.

Yet, in all of this, it was the British Empire with its “white” Christian activists and preachers that ended slavery in the Western civilization. Not Africans, not Asians, not Arabs but the white man ended the slavery of black slaves.

What began with a “sect” of Christian abolitionists in the British Empire, ended up changing the world – and ended the institution of slavery that had characterized human society in all history. These Christian activists and preachers had been deeply repulsed by what they witnessed and passionately re-communicated the ancient Christian sentiment against slavery and racism.

Christian activist preachers and the British Empire abolished Slave Trade:  Slavery has been an integral part of human history and embedded in the social hierarchy of virtually all civilizations. However, the Christian religion – with its message of equal worth – lay the ideological foundations for anti-slavery thought.

In the 17th century, Christian groups fought tirelessly to abolish the trade they rightfully called evil, and, with the help of the British Empire, finally succeeded in ending the infamous trade.

The British Empire, acknowledging the evil it had helped create, went to great lengths to regret it and abolish it. Their efforts and success in doing so deserves greater attention in modern-day debate.

Christian activist preachers and the British Empire abolished Slave Trade:  Anti-slavery has always been an underlying sentiment in the Christian religion. It stems from the core Judeo-Christian idea that all humans are born in the image of God, as stated in the first chapter of the Bible, and thus have equal worth.

The founding father of what later became the largest religion in the world, the Eastern philosopher and spiritual icon, Jesus son of Mary, outlined the very solution to civil strife, division and war. One of his followers was the Christian preacher and civil rights leader, Martin Luther King. His simple message was “Love one Another.”

Robert Palmer, a distinguished historian at Princeton and Yale, state in A History of the Modern World that Christian philosophy was revolutionary in that its definition of humanity was inclusive of all people, an altogether new view on the value of human life.

It was Christianity that introduced the principle of equality, which unleashed the revolutionary idea that each man, regardless of class, gender and race, has a genuine worth.

The famous philosopher and atheist Jürgen Habermas states that Christian theology in the Middle Ages and Spanish scholasticism as the origins of what we call human rights. The early Christians worked to relieve suffering, help the poor, support the sick and ailing. They taught humility, kindness, perseverance and that all men were brothers.

Habermas points out that modern moral philosophical and political theory pays a high price for excluding the very Christian ethics that in history has demonstrated the ability to motivate individuals to care for one another.

Christianity taught that all men were equal

Christian activist preachers and the British Empire abolished Slave Trade:  In the slave-built Roman Empire, St. Paul urged Christians to break with the Roman view of slaves as degraded, and exhorted slave owners to treat their slaves in love, as brothers. “There is neither Jew nor Greek, neither slave nor free, nor is there male and female; for ye are all One in Christ Jesus,” St. Paul writes in Galatians 3:28 (KJV).

Other early Christians were also deeply skeptical and repulsed by the institution. St. Augustine (5th century A.D) described it as evidence of mankind’s fall from grace. St. John Chrysostom (4th century A.D) called it “the fruit of covetousness, of degradation, of savagery…the fruit of sin, of rebellion against…our True Father.”

Other “Church Fathers” (4th century) argued strongly for the emancipation of slaves, and some, like St. Eligius (6th century), spent their wealth on buying, then freeing, vast scores of slaves.

When Christianity was legalized in the Roman Empire in the 4th century, Emperor Constantine already made liberalizing reforms for slaves to promote the idea of equal worth.

The Middle Ages saw theologians and statesmen wrestle with how to restructure society to become slave-free, and in 1102, slavery was officially banned in England.

Christians in the British Empire stopped the Atlantic Slave Trade

Christian activist preachers and the British Empire abolished Slave Trade:  However, the rise of globalized trade in the 15th century revived Europe’s involvement in slavery. Labor demand in the commodity plantations in the Americas was high, so merchants began buying slaves from African tribes and kingdoms and ship them to the plantations across the Atlantic.

In, the so-called Enlightenment Era (16th-18th century), this Atlantic Slave Trade boomed, and millions were shipped over, doomed to a lifetime of forced labor. Racist dehumanization, mixed with legal loopholes and distorted interpretations of science and religion, helped Europeans quell their conscience in the interest of business.

The Quakers – a Protestant, anti-institutional denomination – were vehemently opposed of slavery and fought consistently against it in the 17th century, notably founding schools of liberated African children.

They spread awareness of the outrageous maltreatment of slaves and the sinful nature of it, and soon inspired scores of other Christians and Evangelicals to join their cause.

Most notable were Charles Spurgeon (whose sermons were often burned for their disdain of slavery), preacher John Wesley, and John Newton, a former slave trader and composer of the hymn Amazing Grace. Many African abolitionists wrote books and pamphlets describing the horrid conditions and raising awareness.

In 1787, they formed an Abolitionist pressure group, sometimes known as the Clapham Sect. Coming to their aid was MP William Wilberforce, who managed to translate their Christian abolitionist ideas into political form in the British Parliament.

They printed leaflets and held speeches to educate the public of the abuses of slavery, then gathered petitions and resorted to various political tactics to sway the Parliament to abolish it.

Soon, MP Wilberforce managed to persuade the Parliament of the evil it had helped create.  In 1807, at the height of the Napoleonic wars, the Slave Trade Act was passed, officially prohibiting the slave trade across the Empire.

Four years later, in 1811, the Empire made slave smuggling an Imperial felony – across the entire world. In other words, London decided that slave trade was illegal for everyone, not just the British. They gave the Royal Navy mandate to patrol and seize any ship they suspected was smuggling slaves. If found, the slaves were liberated, and the shipowner trialed.

The British Empire prohibited Others to continue the Slave Trade

Christian activist preachers and the British Empire abolished Slave Trade:  The British prohibited other nations from engaging in the slave trade as well. They seized foreign ships carrying slaves, and pressured European nations and African kingdoms into signing treaties that made them vow to end the buying and selling of humans.

The use of slaves in plantations, however, continued – but was also declared illegal in 1833 with the Slavery Abolition Act, initiating a gradual process of emancipation and government compensation. By 1840, all slaves across the Empire and in all colonies were free men and women.

What began with a “sect” of Christian abolitionists in the British Empire, changed the world – and ended the institution of slavery that had characterized human society in all history.

Christian activists and preachers had been deeply repulsed by what they witnessed and passionately re-communicated the ancient Christian sentiment against slavery and racism.

The racism that surged during the slave trade was fiercely combated by the universal Christian message of “neither Gentile nor Jew” – the idea that all humans are children of God, and therefore of equal worth.

Much thanks to William Wilbeforce’ political acumen, they helped London finally realize the abhorrent immorality of slave trading, and, with the muscles of the Empire, prohibit the institution across the world. The “the fruit of covetousness, of degradation, of savagery” was picked and thrown away.

The Herland Report Scandinavian news site, TV channel on YouTube and Podcasts have millions of readers/viewers yearly. It is a great place to watch interviews and read the articles of leading intellectuals, thought leaders, authors and activists from across the political spectrum. The Herland Report believes in freedom of speech and its editorial policy resides above the traditional Left vs Right paradigm which we believe has lost its relevance and ability to describe the current driving forces in Western politics.
Previous Joseph Stalin was the gold standard of Dictatorship, how to control a nation by fear
Next TV Interview with Reginald Davis: War on the Working Class, moral crisis