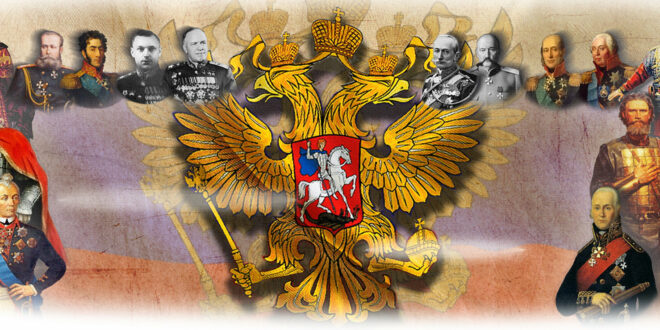 Exclusive: The story of how Russia turned to Conservatism / Glenn Diesen

Herland Report: How may we better understand Russia? Professor Glenn Diesen’s intriguing book, Russian Conservatism discusses Russia’s turn from Atheism to Conservatism, highlighting the country’s return to its history before 1917.

Read the exclusive excerpts below. While the steadily weakened West is rapidly moving away from its historical roots, Russia seems to better recall how Communism ended and now embrace its history before Lenin.

BUY the book here or here and acquire a new understanding of the driving forces that define modern Russia.

The evolution of Russian Conservatism: As Russia itself has changed through history, new conservative strands emerged to adapt to new realities.

Nikolai Karamzin was a cultural conservative who emerged in the late eighteenth century during the Romanticist era that opposed the excesses of the Enlightenment.

Karamzin was deeply critical of the Cultural Revolution under Peter the Great, aimed to Europeanise Russia, and meant it was neccessary for Russia to return to its roots by reviving the its cultural distinctiveness.

Political conservatives emerged in the form of Slavophiles from the 1830s and 1840s. Slavophiles such as Aleksei Khomyakov, Ivan Kireevskii, Konstantin Aksakov and Yuri Samarin considered Russia to be on an artificial European path, and advocated for developing Russia based on its native values and institutions that prevailed before the Petrine reforms.

Konstantin Leontiev similarly believed in organic development and romanticised the Byzantine past of Russia, while others drew inspiration for Medival Muscovy.

Pan-Slav thinkers like Nikolai Danilevsky advanced a conservative strand that endeavoured to unite Slavs akin to German unification of 1871.

Fyodor Dostoyevsky drew from different conservative ideals – he distanced himself from the Slavophiles but was an advocate of pan-Slavism; he looked towards the Byzantine past as a motivation to “retake” Constantinople; he believed that conservatives and the liberal elites should find unity; and he also had some early Eurasianist impulses as the eastern frontier was seen as a remedy to the decadence from living like Europeans.

The story of how Russia turned to Conservatism: The early twentieth-century Eurasianists such as Nikolai Trubetskoi and Pyotr Savitsky rejected that Russia was defined solely by its Slavic roots as the steppes of Eurasia had altered Russia.

The commonality of all conservative epochs has been the central role of the Orthodox Church, which also serves as an instrument to bridge Russian history and different conservative strands.

The conservative turn of Russia from the beginning of the twenty-first century demonstrates both continuity and change.

The story of how Russia turned to Conservatism, by professor Glenn Diesen: Under the Putin presidency, Russia began seeking refuge and stability under conservative ideas that had been prominent before the Bolshevik Revolution.

Conservatives recognize that revolutionary change is destructive, which caused a return to the old question of how conservatives should respond incorporate revolution that has already changed the fundamental character of the state?

Conservatism should not be conflated with nostalgia. Grand Duke Nikolai Nikolaevich argued following the loss of Russia to the Bolshevik Revolution: “Nobody should dream that it is possible to turn back the wheel of history. Our task is not to re-create the old order but to build a new Russia”(Robinson 2019: 140).

Conservatives have to salvage what it can from the revolutionary periods of Russian history and incorporate it into the national identity of Russia.

The Mongol legacy, the Cultural Revolution by Peter the Great, the Great Reforms of the nineteenth century, the Bolshevik Revolution and other disruptive events are part of Russia’s collective consciousness and contributed to what Russia has become today.

By expanding and widening the historical memory and traditions, the rifts caused by revolutions become less profound in terms of shaping the identity. In other words, the revolutions of 1917 and 1991 must be incorporated into Russia’s identity, although it does not define Russia as the nation was born more than a millennium ago.

Contemporary Russian conservatism, therefore, aims to draw a national narrative with historical memory from Prince Vladimir the Great who converted to Christianity in Kievan Rus in the tenth century to the current realities of the Russian Federation.

Finding a Russian path to change and modernisation requires selfawareness and self-esteem, thus rediscovering the traditional in the past is imperative to look confidently into the future.

The cultural inheritance is revived, the Orthodox Church is being elevated as a social institution, and nineteenth-century conservatives are commemorated with statues. Putin rarely cites any socialists or liberals; rather, his speeches frequently include quotes by Nikolai Berdyaev, Ivan Ilyin, Pyotr Stolypin, Aleksandr Solzhenitsyn, Fyodor Dostoevsky, Nikolai Karamzin, and other conservative thinkers.

Unlike the Russian Empire or the Soviet Union, Russia has neither the capacity nor intention to pursue hegemony in Europe or Eurasia. Having made its peace with its existing borders, Russia has positioned itself as a status-quo power seeking to consolidate its existing position.

The demographics have changed with a higher percentage of ethnic Russians within its borders, which opens up the question of defining the nation. However, Russian conservatives are more drawn to the identity of a civilisation state as it seized being an ethnic nation-state in the mid-sixteenth century.

The tradition of a strong state remains as a source for stability, although as stability boosts the confidence of the Kremlin, there is more ambitious experimentation with gradual democratic reforms.

Russia also aims to resolve the historical challenge of establishing a Russian political economy that pursues organic growth. Infrastructure projects are advanced to tie together the vast territory, with great similarity to the economic policies of Sergei Witte at the end of the nineteenth century.

The changing international distribution of power is also influencing Russian conservatism. The rise of Asia, most prominently China, ends 500 years of Western dominance. This has profound implications for Russia as it contributes to resolving the Eurasian schism in its identity and the fixation on Europe and the Western world.

The economic rise of Asia ends the dichotomy between a modern European identity and a traditional eastern identity. Eurasian integration by linking with both the east and the west becomes a viable geoeconomic project and a source for bringing harmony to Russian unique identity.

About the book: A remarkably well researched and intellectually persuasive book.

Glenn Diesen manages to elegantly avoid biases of Russian and foreign authors writing on the subject.

And it is highly relevant in the times of the unleashing struggle to fill the ideological void created by evaporation of communism and liberalism. A must reading for Russian intellectual class, too.”

Glenn Diesen’s other books are: Great Power Politics in the Fourth Industrial Rivalry: The Geoeconomics of Technological Sovereignty (2021); Russia in a Changing World (2020); The Decay of Western Civilisation and Resurgence of Russia: Between Gemeinschaft and Gesellschaft (2018); Russia’s Geoeconomic Strategy for a Greater Eurasia (2017); and EU and NATO relations with Russia: After the collapse of the Soviet Union (2015).