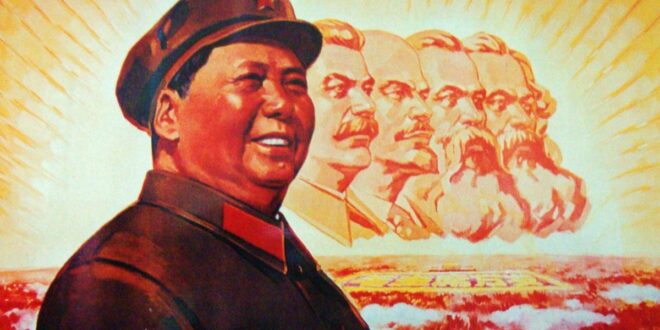 Herland Report:  Mao Zedong America: “Older Americans who were brought up in a fact-based, reason-based society are at a loss to understand the anti-factual, anti-reason, emotion-based attacks on straight white persons and Western civilization,” writes Dr. Paul Craig Roberts in a new post:

“A woman with direct experience with the ruling woke ideology in American universities, media, Democrat Party, and corporate management explains the destruction of reason and evidence-based knowledge that is leading us back to the barbaric emotionalism of the age before reason.

The basis of a scientific and technological society is being unraveled.  America is becoming a form of pre-modern barbarism armed with nuclear weapons.” End quote.

All across America reports turn up about regular citizens who are trying to address the gross injustice that wokeness produces.  Using Mao Zedong tactics from the old Communist system, individuals are shamed into submission and silence through group tyranny.

The well known Communist method to subdue and exert social pressure on those who do not support the Socialist-Communist world view, is now massively being used in the United States through the so-called cancel culture movement, applying critical race theory. Read more here.

Read below the shocking story of Grace Daniel, the co-founder of a nonprofit that trains care providers to victims of trauma globally. She explains how critical theory, cancel culture and Mao Zedong tactics were used in order to shut down their business, and how they fought back.

Mao Zedong America:  Grace Daniel: “By now there are enough “cancel culture” stories to fill volumes. After my own story about standing up to a woke mob—and succeeding—went viral on Twitter, I decided to speak out, because I am convinced that Americans need more encouraging stories about standing up to cancel culture, and information on how they can do it themselves.

My story began in 2010, when my husband and I founded a nonprofit organization that trains people around the world who are providing care for survivors of trauma. We were pleased with the success of our organization for the first several years, but around 2016, we noticed a change.

Mao Zedong America: My husband, who serves as executive director, eventually found himself uneasy among his staff. The general tone was one of criticism. It wasn’t explicitly directed at him at first, but toward “systems,” the “hegemony,” and “normativity.”

We were not acquainted with critical theory at the time, but the common rhetoric about “systems of power and oppression” was an indicator that there was a shared perception of reality among team members to which we were not privy.

We initiated all-team sessions to hear from our staff and discern what was happening. What usually happened was the staff made vague assertions that the organization was “causing harm” and would present a list of demands. I later came to understand these meetings were essentially “struggle sessions”—an opportunity for our woke employees to shame us into submission, a technique often used in Mao’s China.”

Mao Zedong America: Also check out these topics at CNN or FOX News. Other sources may be New York Times, USA Today, the Washington Post or from the British angle, BBC, The Guardian, The Telegraph or Financial Times.

Previous Never forget Libya: Under Muammar Gaddafi Libya was Africa’s richest welfare state
Next Truth About Slavery: Practiced by Africans and Arabs in Africa long before the White man got involved