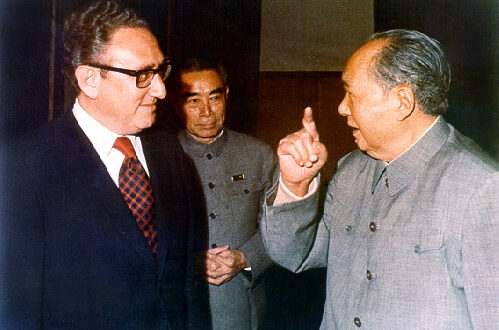 Herland Report: Mao Zedong, the founder of the People’s Republic of China, is currently quoted again and again in President Joe Biden speeches.

One may therefore humbly assume that Biden respects Mao and endorses some his work or else he would obviously not have referred to him repeatedly.

And as the United States is turning to Marxism, openly endorsed for example by Black Lives Matter, it is but natural that President Joe Biden steadily quotes the Chinese Communist leader. Let us therefore take a look at who Mao Zedong was.

“Mao qualifies as the greatest mass murderer in world history”, says Frank Dikötter, an expert with unprecedented access to the Communist Party archives, writes The Independent.

The Dikötter book outlines an unprecedented, groundbreaking history of China’s Great Famine that recasts the era of Mao Zedong and the history of the People’s Republic of China.

During the Mao enforced 1958 Great Leap Forward, which was the Chinese effort to gain economic momentum and grow faster in order to better compete with the West, Mao was responsible for “one of the worst catastrophes the world has ever known”.

Chinese rural history from 1958 to 1962 shows that as China endured the great famine, Dikötter found in the official Communist Party archives systematic torture, brutality, starvation and killing of Chinese peasants on the level of Second World War in magnitude.

The respect for human life and the lower classes was horrifyingly low, very much to the contrary of the Communist official slogans which stated that the worker was to be elevated and respected.

Around 45 million people were starved or beaten to death in China during those four years. Bear in mind that the death toll from World War II was around 55 million.

Mao Zedong, often quoted by Joe Biden, was greatest mass murderer in history: The book explains the horrifying atrocities this way: “Between 1958 and 1962, China descended into hell. Mao Zedong threw his country into a frenzy with the Great Leap Forward, an attempt to catch up to and overtake Britain in less than fifteen years. The experiment ended in the greatest catastrophe the country had ever known, destroying tens of millions of lives.

So opens Frank Dikötter’s riveting, magnificently detailed chronicle of an era in Chinese history much speculated about but never before fully documented, as access to Communist Party archives has long been restricted to all but the most trusted historians. A new archive law has opened up thousands of central and provincial documents that “fundamentally change the way one can study the Maoist era.”

Dikötter makes clear, as nobody has before, that far from being the program that would lift the country among the world’s superpowers and prove the power of Communism, as Mao imagined, the Great Leap Forward transformed the country in the other direction.

It became the site not only of “one of the most deadly mass killings of human history”–at least forty-five million people were worked, starved, or beaten to death–but also of “the greatest demolition of real estate in human history,” as up to one-third of all housing was turned into rubble.

The experiment was a catastrophe for the natural world as well, as the land was savaged in the maniacal pursuit of steel and other industrial accomplishments. In a powerful meshing of exhaustive research in Chinese archives and narrative drive, Dikötter, for the first time, links up what happened in the corridors of power–the vicious backstabbing and bullying tactics that took place among party leaders–with the everyday experiences of ordinary people, giving voice to the dead and disenfranchised. His magisterial account recasts the history of the People’s Republic of China.” End quote.

Mao Zedong, often quoted by Joe Biden, was greatest mass murderer in history: ChinaWatch writes: Mr Dikötter is the only author to have delved into the Chinese archives since they were reopened. He argued that this devastating period of history – which has until now remained hidden – has international resonance. “It ranks alongside the gulags and the Holocaust as one of the three greatest events of the 20th century…. It was like [the Cambodian communist dictator] Pol Pot’s genocide multiplied 20 times over,” he said.

Between 1958 and 1962, a war raged between the peasants and the state; it was a period when a third of all homes in China were destroyed to produce fertiliser and when the nation descended into famine and starvation, Mr Dikötter said.

His book, Mao’s Great Famine; The Story of China’s Most Devastating Catastrophe, reveals that while this is a part of history that has been “quite forgotten” in the official memory of the People’s Republic of China, there was a “staggering degree of violence” that was, remarkably, carefully catalogued in Public Security Bureau reports, which featured among the provincial archives he studied.

In them, he found that the members of the rural farming communities were seen by the Party merely as “digits”, or a faceless workforce. For those who committed any acts of disobedience, however minor, the punishments were huge.

State retribution for tiny thefts, such as stealing a potato, even by a child, would include being tied up and thrown into a pond; parents were forced to bury their children alive or were doused in excrement and urine, others were set alight, or had a nose or ear cut off. One record shows how a man was branded with hot metal.

People were forced to work naked in the middle of winter; 80 per cent of all the villagers in one region of a quarter of a million Chinese were banned from the official canteen because they were too old or ill to be effective workers, so were deliberately starved to death.

Mr Dikötter said that he was once again examining the Party’s archives for his next book, The Tragedy of Liberation, which will deal with the bloody advent of Communism in China from 1944 to 1957.

He said the archives were already illuminating the extent of the atrocities of the period; one piece of evidence revealed that 13,000 opponents of the new regime were killed in one region alone, in just three weeks. “We know the outline of what went on but I will be looking into precisely what happened in this period, how it happened, and the human experiences behind the history,” he said.

Mr Dikötter, who teaches at the University of Hong Kong, said while it was difficult for any historian in China to write books that are critical of Mao, he felt he could not collude with the “conspiracy of silence” in what the Chinese rural community had suffered in recent history.

Mao Zedong, often quoted by Joe Biden, was greatest mass murderer in history: Also check out these topics at CNN or FOX News. Other sources may be New York Times, USA Today, the Washington Post or from the British angle, BBC, The Guardian, The Telegraph or Financial Times.

Previous Orlando massacre was not anti-LGBT hatred, but anger over Syria and Iraq War
Next 1960s: How the neo-Marxist New Left destabilized the West – Frankfurt School