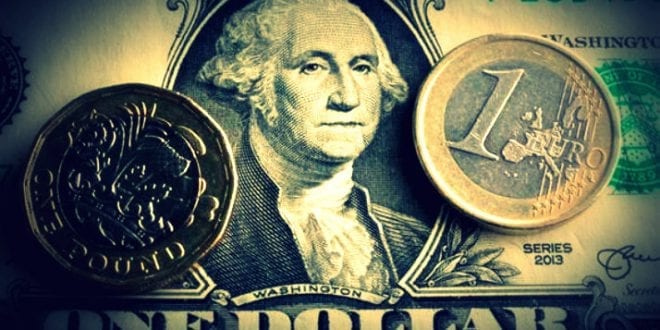 Herland Report: The recent escalation U.S. sanctions blocking Europe, Asia and other countries from trade and investment with Russia, Iran and China has imposed enormous opportunity costs – the cost of lost opportunities – on U.S. allies.

And the recent confiscation of the gold and foreign reserves of Venezuela, Afghanistan and now Russia, along the targeted grabbing of bank accounts of wealthy foreigners (hoping to win their hearts and minds, along with recovery of their sequestered accounts), has ended the idea that dollar holdings or those in its sterling and euro NATO satellites are a safe investment haven when world economic conditions become shaky.

This writes author Michael Hudson, President of The Institute for the Study of Long-Term Economic Trends (ISLET), a Wall Street Financial Analyst, Distinguished Research Professor of Economics at the University of Missouri, Kansas City.  Excerpts from the article below.

Sadly, the American Empire Destroys the Trust in its own Dollar: Nobody thought that it (The American empire self-destructing) would happen this fast. Empires often follow the course of a Greek tragedy, bringing about precisely the fate that they sought to avoid. That certainly is the case with the American Empire as it dismantles itself in not-so-slow motion.

The basic assumption of economic and diplomatic forecasting is that every country will act in its own self-interest. Such reasoning is of no help in today’s world. Observers across the political spectrum are using phrases like “shooting themselves in their own foot” to describe U.S. diplomatic confrontation with Russia and allies alike.

For more than a generation the most prominent U.S. diplomats have warned about what they thought would represent the ultimate external threat: an alliance of Russia and China dominating Eurasia. America’s economic sanctions and military confrontation has driven them together, and is driving other countries into their emerging Eurasian orbit.

American economic and financial power was expected to avert this fate. During the half-century since the United States went off gold in 1971, the world’s central banks have operated on the Dollar Standard, holding their international monetary reserves in the form of U.S. Treasury securities, U.S. bank deposits and U.S. stocks and bonds. The resulting Treasury-bill Standard has enabled America to finance its foreign military spending and investment takeover of other countries simply by creating dollar IOUs. U.S. balance-of-payments deficits end up in the central banks of payments-surplus countries as their reserves, while Global South debtors need dollars to pay their bondholders and conduct their foreign trade.

This monetary privilege – dollar seignorage – has enabled U.S. diplomacy to impose neoliberal policies on the rest of the world, without having to use much military force of its own except to grab Near Eastern oil.

Sadly, the American Empire Destroys the Trust in its own Dollar: The recent escalation U.S. sanctions blocking Europe, Asia and other countries from trade and investment with Russia, Iran and China has imposed enormous opportunity costs – the cost of lost opportunities – on U.S. allies. And the recent confiscation of the gold and foreign reserves of Venezuela, Afghanistan and now Russia, along the targeted grabbing of bank accounts of wealthy foreigners (hoping to win their hearts and minds, along with recovery of their sequestered accounts), has ended the idea that dollar holdings or those in its sterling and euro NATO satellites are a safe investment haven when world economic conditions become shaky.

So I am somewhat chagrined as I watch the speed at which this U.S.-centered financialized system has de-dollarized over the span of just a year or two. The basic theme of my Super Imperialism has been how, for the past fifty years, the U.S. Treasury-bill standard has channeled foreign savings to U.S. financial markets and banks, giving Dollar Diplomacy a free ride. I thought that de-dollarization would be led by China and Russia moving to take control of their economies to avoid the kind of financial polarization that is imposing austerity on the United States. But U.S. officials are forcing them to overcome whatever hesitancy they had to de-dollarize.

I had expected that the end of the dollarized imperial economy would come about by other countries breaking away. But that is not what has happened.

U.S. diplomats have chosen to end international dollarization themselves, while helping Russia build up its own means of self-reliant agricultural and industrial production.

This global fracture process actually has been going on for some years now, starting with the sanctions blocking America’s NATO allies and other economic satellites from trading with Russia.For Russia, these sanctions had the same effect that protective tariffs would have had.

Russia had remained too enthralled by free-market ideology to take steps to protect its own agriculture or industry. The United States provided the help that was needed by imposing domestic self-reliance on Russia (via sanctions).

When the Baltic states lost the Russian market for cheese and other farm products, Russia quickly created its own cheese and dairy sector – while becoming the world’s leading grain exporter.

Russia is discovering (or is on the verge of discovering) that it does not need U.S. dollars as backing for the ruble’s exchange rate. Its central bank can create the rubles needed to pay domestic wages and finance capital formation. The U.S. confiscations thus may finally lead Russia to end neoliberal monetary philosophy, as Sergei Glaziev has long been advocating in favor of MMT.

The same dynamic undercutting ostensible U.S aims has occurred with U.S. sanctions against the leading Russian billionaires. The neoliberal shock therapy and privatizations of the 1990s left Russian kleptocrats with only one way to cash out on the assets they had grabbed from the public domain.

That was to incorporate their takings and sell their shares in London and New York. Domestic savings had been wiped out, and U.S. advisors persuaded Russia’s central bank not to create its own ruble money.

The result was that Russia’s national oil, gas and mineral patrimony was not used to finance a rationalization of Russian industry and housing.

Instead of the revenue from privatization being invested to create new Russian means of protection, it was burned up on nouveau-riche acquisitions of luxury British real estate, yachts and other global flight-capital assets.

But the effect of making the Russian dollar, sterling and euro holdings hostage has been to make the City of London too risky a venue in which to hold their assets.

By imposing sanctions on the richest Russians closest to Putin, U.S. officials hoped to induce them to oppose his breakaway from the West, and thus to serve effectively as NATO agents-of-influence. But for Russian billionaires, their own country is starting to look safest.

Sadly, the American Empire Destroys the Trust in its own Dollar: For many decades now, the Federal Reserve and Treasury have fought against gold recovering its role in international reserves. But how will India and Saudi Arabia view their dollar holdings as Biden and Blinken try to strong-arm them into following the U.S. “rules-based order” instead of their own national self-interest?

The recent U.S. dictates have left little alternative but to start protecting their own political autonomy by converting dollar and euro holdings into gold as an asset free of political liability of being held hostage to the increasingly costly and disruptive U.S. demands.

U.S. diplomacy has rubbed Europe’s nose in its abject subservience by telling its governments to have their companies dump the Russian assets for pennies on the dollar after Russia’s foreign reserves were blocked and the ruble’s exchange rate plunged. Blackstone, Goldman Sachs and other U.S. investors moved quickly to buy up what Shell Oil and other foreign companies were unloading.

Nobody thought that the postwar 1945-2020 world order would give way this fast. A truly new international economic order is emerging, although it is not yet clear just what form it will take. But “prodding the Bear” with the U.S./NATO confrontation with Russia has passed critical-mass level. It no longer is just about Ukraine. That is merely the trigger, a catalyst for driving much of the world away from the US/NATO orbit.

Previous TV Interview with William Marshall: George Soros and US drug epidemic
Next How the American Prison Industrial Complex benefits from Putting So Many Americans in Jail