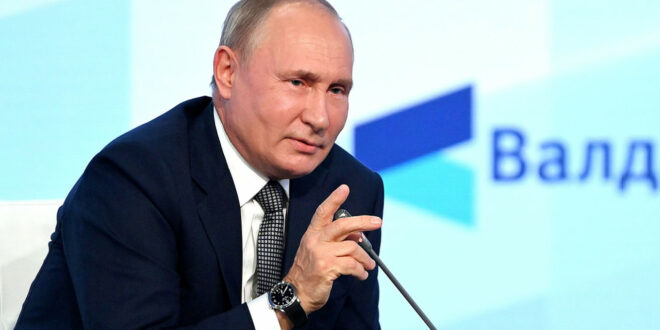 Herland Report: Sanctions against Russia failing: When you dig a grave for others, be careful that you don’t fall in it yourself, the Holy Book wisely warns.

The grave was dug for Russia, but the knockout blow now hits recession bound USA and Europe in a dramatically changing world where the sanctions have backfired spectacularly.

At The Herland Report, we have warned against this effect for months, also taking into account that such a negative development in Europe might be intended.

The trust in Western banking institutions have been crushed, the SWIFT system and other before so reliable sources of world economic order is now at its all-time low, local currencies are replacing the US dollar in the speed of light; 85 % of the global population are refusing to sanction Russia and Russia itself is swimming in money from the sky rocketing energy prices, writes Hanne Nabintu Herland, historian of comparative religions, author and columnist at World Net Daily.

President Putin has never been more popular, trusted by over 8o % of the Russian population, according to VTSIOM, where many complain that he should have attacked Ukraine much earlier.

Even oligarchs who formerly hated Putin and strongly opposed him domestically, now love him.

Sanctions against Russia failing: Europe also used to love Putin, to the extent that when the Green Energy ideology first made Europe shut down its own energy resources without having an energy substitution, Europe was happy to leave its fate in the hands of Russian oil and gas.

The Canadian philosopher, Jordan Peterson recently deemed political statesmen incompetent to the degree it defies comprehension for first choosing to become dependent on Russian energy for environmental reasons, and not understanding that it would produce the current crisis.

By implementing sanctions against the very source of energy upon which they depend, Europe has been thrown by its own politicians into an unbelievable recession.

How wrong is it possible to be? How incompetent are our leaders, actually?

Sanctions against Russia failing: European leaders rushed to implement sanctions on Russian energy as early as the day after the invasion of Ukraine – they needed no time whatsoever to reflect upon the long term effects this would have on European nations and industries, but ran to the action with no second thought – most probably following Washington’s advice.

Wall Street predicted with pride that Russia’s economy would collapse and resemble a trainwreck when hit with sanctions. But soaring energy and commodities’ prices has as a result of the very same sanctions, made Russia filthy rich, with surplus of 265 billion USD this year, according to The Economist.

By 2022, Russia’s energy export revenues are predicted to be 337.5 billion USD, 38 % more than 2021. Top investment banks predicted a total Russian downfall, forecasting in March that the country’s GDP would fall 35% in the second quarter. It only fell 4 %.

President Biden was extremely quick to state that Russia’s economy was already cratering and reeling, Washington Post boasting in March that Russia was in free fall, its foreign reserves frozen, its oligarchs denied access to properties and its banks barred from Western financial networks.

As it turns out, the Shanghai Cooperation Organization is now working around the clock to exclude both the US dollar and the Euro and replace them with national payment systems.

Who dares to have their money in Western banks after this?

Russia was forced to switch to its local currency, the Ruble, which is currently the best performing currency in 2022,  creating its own SWIFT system, abandoning the US Dollar and rapidly search out new markets and closer relations to China, India, Iran, Brasil, Saudi Arabia and African nations.

In Europe, on the other hand, 45 million Brits are set to plunge into fuel poverty this winter. Mayor of London, Sadiq Khan recently tweeted: ”We have seen nothing like this before. We are facing a winter where for millions it won’t be about choosing between heating or eating but tragically being able to afford neither.”

Sanctions against Russia failing: Germany, Europe’s largest economy, has in reality have agreed to commit hara-kiri and face deindustrialization as sky rocketing energy prices hit the market. Russia, on the other hand, can shut off gas to Europe for a whole year without even noticing it much, writes Bloomberg.

To top it off, Ukraine’s richest mineral deposits, worth 12.4 trillion US dollars are now in the hands of Russia, writes Washington Post: That is 63 % of world coal deposits, 42 % of its metals and 33 % of other earth elements, not even counting agricultural land.

With the worst drought in 500 years facing Europe, it apparently has rained more than ever in Russia, set for a record grain harvest in 2022 that may reach 145 million tons, according to the Institute of Agricultural Market Conjuncture.

To return to the interview with Jordan Peterson: “Never underestimate the people you are at war with,” he says.  To march on Moscow has never been easy.