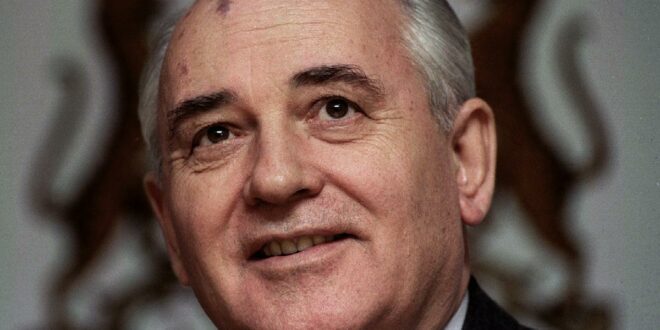 Herland Report: Mikhail Gorbachev was the first President of the Soviet Union and the last Soviet leader.

He was the best of the younger generation of Communist Party members who understood, like US President Ronald Reagan, the futility of the Cold War and the needless threat of nuclear Armageddon.

Gorbachev also understood that the repressions and hardships of the Soviet years were unnecessary, and he with advisors, some of whom I met and engaged in discussion, attempted to reform the Soviet system. There is no question that he was a great man and a sincere leader of the Soviet peoples, writes Dr. Paul C. Roberts, the chairman of The Institute for Political Economy, former associate editor of the Wall Street Journal and a regular contributor to The Herland Report.

President Reagan realized Gorbachev’s greatness. Reagan also realized that Gorbachev was limited in his ability to end the Cold War by distrustful elements in the Politburo.

President Reagan’s plan, in which I was a participant, was to rescue the US economy from “stagflation” and then to put pressure of a threatened arms race–Star Wars– on the Soviet Union in order to enhance Gorbachev’s position in favor of ending the Cold War than to subject the struggling Soviet economy to an arms race with a revitalized US economy.

Mikhail Gorbachev R.I.P. Reagan, despite the CIA’s opposition and that of the US military/security complex, carried out his plan not in order to win the cold war but as Reagan repeatedly stressed to all of us involved to end the Cold War. None of us, Reagan included, had any idea of Soviet collapse.

Our purpose was to halt a gratuitous conflict that threatened humanity with nuclear Armageddon.

Van Cliburn had won, with Khrushchev’s approval, the inaugural International Tchaikovsky Competition in Moscow in 1958. In addition to classics of Russian composers, Van Cliburn regaled Mikhail Gorbachev with Russian folk songs. President Reagan absolutely forbade any derogatory reference to the Soviet Union. Nothing, not even the CIA, was to prevent the end of the Cold War.

After Reagan’s second term ended, I had less connection with his successor, his former vice president, George H. W. Bush, but I know for an absolute fact that Secretary of State James Baker gave assurances to Gorbachev that if Gorbachev permitted the unification of Germany, NATO would not move one inch to the East.

There is no doubt about this, despite the denials by American neoconservatives and Clinton regime officials.

The Soviet Union collapsed, not because of Reagan, but because the hardline Communists, disturbed, as is understandable, by Gorbachev’s trust in Washington’s word, attempted a coup and placed Gorbachev under house arrest.

It was this miscalculation that brought about the collapse of the Soviet government and the rise of Yeltsin, who, intentionally or not, essentially was under Washington’s control.

Mikhail Gorbachev, believing as did Reagan, in the futility of the Cold War, trusted that the conflict was over. Gorbachev’s mistake was that he did not understand Washington.

An American President can make an agreement that can be rescinded by a successor. This is the case even if there are signed documents, but in the absence of signed documents, the corrupt Clinton regime was able to claim no such agreement as NATO not moving to Russia’s borders ever existed.

In view of the Democrat Clinton regime’s overthrowing the Reagan-Gorbachev ending of the Cold War with a New Cold War, now greatly expanded under the Democrat Biden, the Kremlin’s toleration of the West’s declared aggressive intentions against Russia is puzzling. How can anyone in the Kremlin ever again believe a word that Washington says?

In Russia, Mikhail Gorbachev is not seen as the great leader that he was. In America ignorant flag-waving patriots mistakenly base their pride on Reagan winning the Cold War.

As far as I, a participant, can tell, neither side understands what has happened.

Dr. Paul Craig Roberts is the chairman of The Institute for Political Economy, former associate editor of the Wall Street Journal, and a well known author of many books. He is also a regular contributor to the Herland Report news site as well as The Herland Report TV interviews on YouTube. He has had careers in scholarship and academia, journalism, public service, and business. He has been awarded the Treasury Department’s Meritorious Service Award for “his outstanding contributions to the formulation of United States economic policy.”
Previous Was the Covid-19 disruption worth it? Useless lockdowns, useless PCR, the billionaires earned billions, the poor lost so much
Next How the Cold War Was Resurrected post Gorbachev